Power of One: Pokemon 2000 Movie Special on the WB is yikes!

It’s the year 2000 and Pokemon is still the hottest thing out there but it’s already showing signs that it is slowing down slightly, still you want to milk all the money you can out of the second theatrical movie. The year was 2000 and nobody could still believe that they were now living in the future so even this late in the game you could add 2000 to the title of something to make it seem more appealing because it’s the millennium baby. The Power of One featured the new Gold and Silver sequel Pokemon including the legendary Lugia, inertia of the Pokemon fad would’ve sold plenty of tickets but why not promote it with a special that can be used to sell the Pokemon 2000 movie soundtrack and some WB shows as well.

For WB channel on we had Kel Mitchel hired to shill this 30 minute special giving us a sneak peak at the movie, new mythological Pokemon but also N’Sync, Kobe Bryant Christina Aguilera because they don’t want the average person to change the channel but mostly awful music performanes. Youngstone featuring Nobody’s angel live perform the second season theme and unlike the actual studio version it somehow works better. The crowd is completely dead but there are tons of screams added in post production to make it seem like someone actually cares for those wanna be stage. as if they were famous.

Kel tries to get the crowd excited and he’s really doing all his best to talk about something he has no idea what actually is. We get a small preview for the movie that is not very well edited with like 4 different narrators Kel being one of them and it does an awful job at selling the movie. You know they have time to kill when they keep buying time by telling you “Ash, Misty, Team Rocket and your favorite Pokemon are going to be there” over and over again.

We get the most unexciting “Who’s that Pokemon?” ever and the worst pronunciation of Elekid I’ve ever heard. David Gallagher is brought to fake cheers from the crowd and he seems excited telling us how Pokemon Rulz! He answers the question of what is the Power of One with the most generic and rehearsed response you’ll hear today and all of this just to promote the WB show Seventh Heaven.

We get a small clip on how one person can make the difference with a story of two boys who raised money to buy goggles for firefighters that I think even local news stations would not have run and this is where pre-Dirty Christina Aguilera makes her 3 second appearance with an out of context line that “everyone can change the world” from their archive and clearly not from anything related to Pokemon but I guess that was enough to be featured as a special guest.

The second story of the fund raising some kids did is definitely better but still feels really out of place in a Pokemon special Kobe Bryant’s appearance is just a 5 second clip from a random interview about how one person can make a difference. N’Sync just filmed a small segment to promote their charity event but at the very least they mention that you have the power of one so at least they told them something about what the special was about.

We then get a short E! True Hollywood story about Alisha Antonino who dreamed to be a star and a 12 year old singer who I can’t find any more info on her so I’m guessing her dreams really did not come true besides helping stink up the Pokemon 2000 soundtrack. Her performance is a bad lip syncing performance with no stage presence but that didn’t the fake crowd noises as the camera pans out to a somewhat empty stage with kids crossing their arms because they want to see more Pokemon.

We get a quick behind the scenes on the recording of the Pokemon 2000 soundtrack but mostly the only salvageable line is from Weird Al Yankovic and how the root of all music is Polka. According to him it’s apparently better than Pokemon The First Movie soundtrack but I’m not sure if that is necessarily a good sign. Donna Summer who doesn’t seem to care what Pokemon is but that’s not stopping her from likely being the only good thing about the record. Some minutes from the awful special are missing and it really is a blessing in disguise since it means we miss the announcer was going to mangle the pronunciation of Lugia. But we weren’t so lucky with the Dream Street performance who were indeed little kids as I speculated on my Pokemon 2000 album review. So this had basically nothing to do with Pokemon that could’ve made it into something cheesy but fun and instead it’s one of those cases where something should have just been let to rot with time. 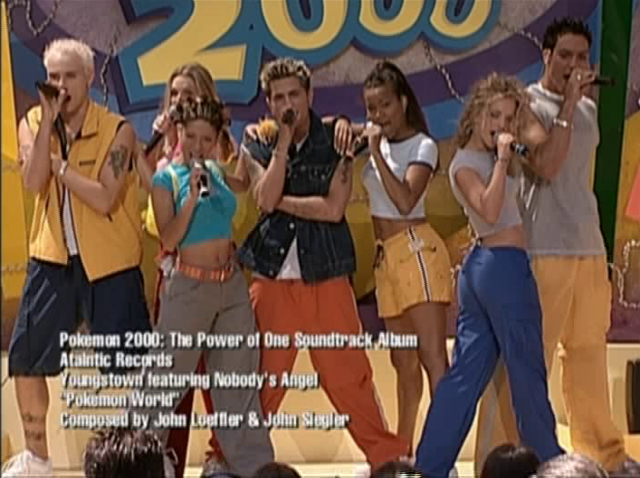 power of one Pokemon 2000 special