WWF Wrestlemania 2000 & WWF No Mercy intros on the Nintendo 64

When I became a wrestling fan as a kid one of the first things I wanted was a video game were I could play as my favorite wrestlers and beat up the heels who were against them. In those preview kiosks that Nintendo had in the 90s I was able to preview two different games; WWF Attitude and WWF Wrestlemania 2000 both for the Nintendo 64. I debated for days as to which one to get based on the videos and screen shots I had seen. I eventually decided to wait for Wrestlemanis 2000 and boy did I make the correct decision as the Acclaim game is not seen in a favorable way while AKI wrestling games are still highly regarded even today.

The gameplay was great and while many features that the Playstation version of the games that I really wanted were missing from the Nintendo 64 versions like the full titantrons and special gimmick matches like Hell in a Cell, I did not care. The storylines of the game instead of featuring a fun or creative one mostly botched up the main wrestling storyline of the year which I never liked that didn’t stop me from finishing story mode. The grappling system was just so much fun and even though you could cheat the AI by spamming the taunt button you can argue the AI cheated on the more difficult settings. It didnt matter the game was a lot of fun and I spent hours playing them. I’m not here to review a game however but I’ll talk about the introductions their WWE games had since they’re definitely memorable.

AKI’s first WWE game was WWF Wrestlemania 2000, they had been working on the WCW games for a while so they had a new set of wrestlers and it seems that they were rather excited to have a new license since they seemed to put a lot of effort into everything including the intro. Like the WWF themes that their shows had this one is full of excitement as it takes a bunch of iconic moments and likely events from the WWF and included them all in this vignette of classic moment after classic moment that all went along rather nicely with their music. This is truly the epitome of their efforts as they got the attitude of the WWF’s Attitude era in a short 5 minute video. I would lie if I said that watching it again didn’t excite me as much as it did that cold fall day I first turned the game on after getting the game.

It wasn’t too long before we got a sequel to the game called WWF No Mercy. I had been so into the previous game I never thought twice about not getting it, I knew I would love it even if it was just more of the same. Luckily the game was indeed more polished even if they did take out a few things I liked from the previous game. They took a different approach to the intro though with a more dramatic yet hip approach to it and while you can see that more effort was put into this than just having the 3D models re-create classic moments and having real audio of the WWF which was uncommon to have audiotracks on a Nintendo 64 game there’s just something this intor misses, you can’t fault them for trying something different but sadly it just can’t match the original intro. 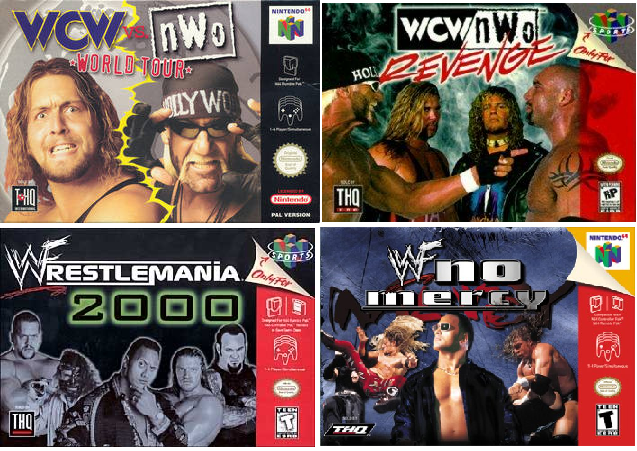 This game also came out as Virtual Pro Wrestling 2 in Japan which is pretty much the same game as Wrestlemania 2000 but without the WWF wrestlers as the Japanese would just have no attachment to them. The intro is rather fun though as it’s basically the same music and style of the WWF Wrestlemania 2000 intro but altered to make it logical with the pro-wrestlers that they licensed for the Japanese release of the game. Sadly the intro was very specifically made with the WWF in mind so it doesn’t quite fit and it seems like there’s less gimmicks in the wrestlers chosen or the events chosen as it ends up feeling long and tedious instead of fun like the WWF’s.