I discovered ECW Wrestling on TNN shortly after it started airing by pure chance and I was completely fascinated, unlike WCW which used to bore me to tears, here we had a show that actually offered something different and yet still entertaining even if the production was a much lower quality. You could tell that this was something unique that couldn’t be replicated and so I watched. A large part of it was indeed the intro which is legendary in its own right and any fan can easily recognize it as the ECW theme.

The intro just oozed of awesome as it felt dark, extreme, dirty and not your typical wrestling promotion. Even if it was indeed on a cable channel you felt like this was underground stuff. The music set up the mood perfectly as did the logo with barbed wire. It’s odd that the music is rather slow yet it feels really heavy and unlike say WWF intros which have quick cuts of action scenes here many of them were rather slow things and yet you could feel that they meant more as you actually felt the impact of the moves or events they tried to show off.

TNN quickly cancelled the show after they got WWF’s Raw is War for their network, I remember being really excited that somehow TNN would have both Raw and ECW only to have the show cancelled shortly after it. Many mention that by the time ECW was son TNN it was a shadow of its former self and while that may be true you can’t deny that it was still offering a different product than WCW or WWF. Every Friday night I would make my Pokemon card deck as I watched what was going on. I also learned a lot of ECW History through their video commercials that they sold about past matches.

While it may’ve only had one hour to achieve things and it didn’t have the best writing the talent really made up for it, especially the crowd and wrestlers. To me it seemed like ECW was only getting more and more popular but we know that it was the other thing that was happening as it slowly imploded on itself. A shame really but it was great to have been a part of the “movement”, never will I fill as much of a mark as when I watched ECW even if it was the “mainstream” version of the brand. 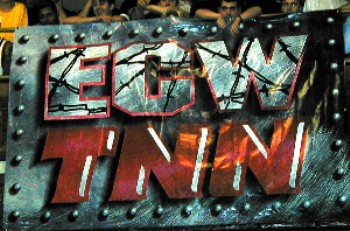