Jurassic Park is one of the most recognizable movies ever made and because of it, it’s gotten tons of song parodies over the years, whether totally original or just writing lyrics to the main theme the franchise has gotten quite a few of them. So let’s take a look at some of the best musical parodies & tributes that Jurassic Park has gotten over the years. 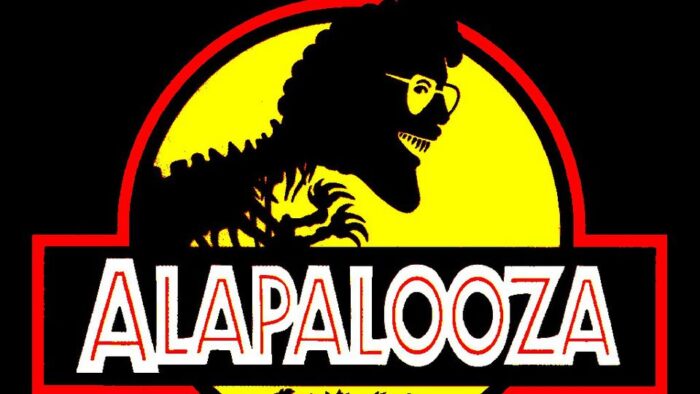 I know a few people think this is an original song but it’s a parody as I recall hearing the original and it was something about a wedding and cakes oddly enough. The song fits Jurassic Park fine since the beat is a little down beat and yet has high moments, the lyrics are excellent as many are quite witty and they’re not all cheap laughs which I remember many people doing at the time. The Claymation used in the video is timeless, Weird Al’s mustache not so much. They do a lot of great visual gags and not only ones that go hand to hand with the lyrics but plenty of extra ones. It really is a lot of fun to watch, one of my favorite gags is the Easter Egg painting robot in the raptor incubator. Here is a behind the scenes for the music video.

I believe this is also a parody of a song but I’m also unsure of which one exactly. I’m not usually a fan of these type of musical parodies where they narrate the movie, it worked on the Star Wars rap but not elsewhere. Not all of the lyrics are witty though there is one or two are a that make it worth a watch not to mention it’s catchy.

They also made a Jurassic World parody which like the above is not amazing though it’s also somewhat oddly amusing. This time the parody of the song is Sia’s Elastic Heart and it basically tells the movie through out it with catchy yet irritating auto tune squeaky voice. Nevertheless good job to lhugueny for making them.

He started a long time ago writing songs to orchestral songs and by the time he did the Jurassic Park theme he had already been active for years. This isn’t one of his best but it isn’t terrible either as some other ones he has made but it’s totally wroth checking out. There have been other versions with lyrics but they just aren’t as good.

Now the greatest of all parodies sadly isn’t a complete song but HOLY SHIT IT’S A DINOSAUR which not only do the lyrics fit perfectly it’s also the reaction that you expect Ellie Sattler to be thinking of as she sees the Brachiosaurus, I believe this one started as a ytmnd.

There have been other Jurassic Park themes with lyrics like this one but while not amazing it’s alright. Jeff Goldblum also referenced one, though I’m not sure which one he is singing, he gives a nice interpretation though.