In the summer of 2000 Star Wars held its first fan film awards and the winner of it was the Star Wars Gangsta Rap. This was before youtube was a thing your battle station needed to have the equipment to play .swf files so you could enjoy this classic from Atom Films. I must’ve watched this hundreds of times, I almost feel bad for my parents. If you’ve never watched it then you owe it to yourself to watch it:

Trying to re-create the original buzz Atom released a “Special Edition” version of the original Star Wars Gangsta Rap in 2004. The audio is exactly the same but the Star Wars Gangsta Rap Special edition featured brand new flash animation and like the real special editions they just aren’t as good as the original. The Flash animation is no longer amateurish looking but completely professional, that actually works against it as that was part of the charm of the original. Then again it could’ve just been that I watched the original so many times anything different just looks odd, go ahead and compare them yourself:


Once again in a desperate attempt to remain relevant int he youtube age Atom released Star Wars Gangsta Rap Chronicles in 2009. The rap just isn’t as memorable and the original had pretty much done a great job that it feels unecessary even if it may have some redeeming parts. The flash animation is really good by now but like in the Special Edition gangsta rap it just works against it and it feels overdone when you see the characters be all pimped up and acting like rappers, it’s all in your face and not as subtle as in the original. Not many people know of the Star Wars Chronicles gangsta rap since it came out so long after and not long after that Comedy Central bought them.

There were other unofficial videos like Star Wars Gangsta Rap 2 which misses the point by overdoing it and cursing which the original did not need. It can give you a laugh or two but it’s not the classic the original was. The original was ritten by Jason Brannon and Chris Crawford and animated by Thomas Lee. Awesome how this little video won an award and ended up being featured on channels like VH1 and the Sci-Fi channel. I would think it also helped inspire Epic Rap battles of history.

What is thy bidding my master?
It’s a disaster! Skywalker, We’re after.
What if he can be turned to the Dark side?
Yes, he’d be a powerful ally! another Dark Jedi.
He will join us or die!

We got death star! Death Star!
And you know that we got it.Death Star!

Owen Lars
Luke, get your ass over here right now!
And quit monkeying around with that damn landspeeder,
Where are them two droids I asked you to clean, boy?
Did you clean your room?

Luke
Uncle Owen, I know I’m on probation,
I cleaned the droids,
Can I go to the Toshi Station?
I gotta lay away on the power converter,
But now you treatin’ me like a scruffy nerf herder!

Yoda
I’m Yoda,
I’m a soulja,
I’ll mold ya, and fold ya
I thought I told ya!
Don’t be unwise, judge me not by my size,
You wont believe your eyes,
Watch the X-wing rise!

Luke
Yoda, why you being a playa hata?
You know I still must confront Lord Vader!

Yoda
But Luke, not ready are you!

Yea, that’s right R-2
Set a new course
We’re going to cloud city
Ah, that’s a mighty good Gin and Tonic
You should mix me up another
Thing’s about to get ugly

Darth Vader
Impressive, now release yo anger
You must have sensed that yo friends are in danger

Luke
Oow! Why’d you slice off my hand?

Darth Vader
It’s imperative that you understand.
Obi-Wan would never bother
Telling you about your father

Luke
He told me enough, he told me you killed him!

Vader
Then there’s something, I must reveal then
I’m… yo’ father
I’m your father 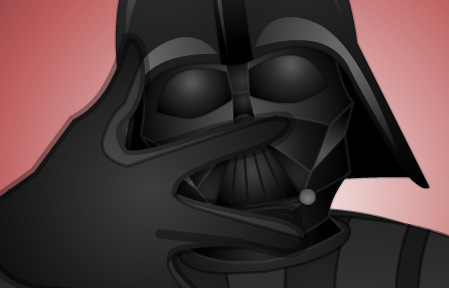