Halloween costumes for kids today can be rather elaborate, just googling you’ll find tons of official and custom costumes for children but things weren’t always like this. IN the past any resemblance to the character only had to pass through certain criteria before it got the licensing approval. This lead to a lot of lazy costumes and some that barely looked like what they were supposed to. Regardless, we still wore them with pride ! With that said soemtimes you would find a diamond in the rough, so here are some costumes in chronological order and how they rate.. ft: Barney, Crash Dummies, Street Sharks & Disney’s Gargoyles.

I’m not sure how Slick from the Incredible Crash Dummies got a costume but I guess they were relatively very popular during a brief period of time and these costumes are cheap as hell to make. Nevertheless I’m beyond happy that such costume exists as for the most part the character and franchise has fallen to obscurity but they were some of my all time favorite figures as a kid. The costume also benefits from the relatively simplicity of the character’s design so it’s actually a rather accurate costume despite being on the cheap side.

The random quote of “let’s not break up a great team.. let’s have a safe halloween.” is a bit weird, I mean I know he’s a crash dummy so safety is important, but not sure if it fits here well or what he means by team. Granted we also do get 4 glow in the dark stickers which I wish I could see, perhaps tehy’re for the costume which would be cool or perhaps just random stickers for no reason whatsoever. 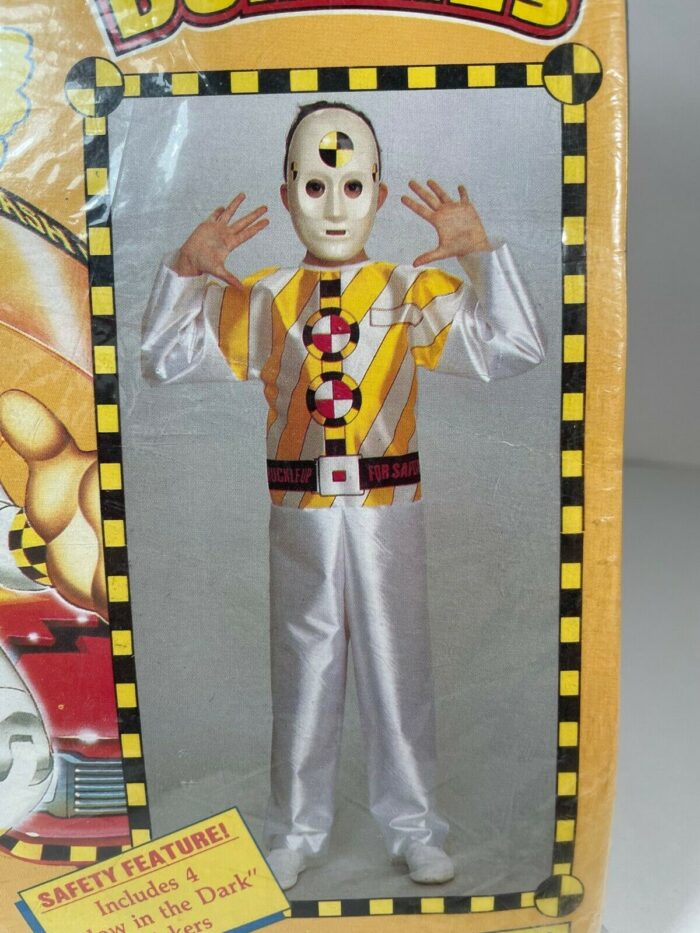 It was around this time that I wore a Barney costume for halloween, but since I couldn’t find it we go for the next best thing, his friend Baby Bop which this costume used exactly the same style as the Barney one. I can’t imagine who would want to dress up as Baby Bop but then again you could say the same thing for Barney so I’ll stop right there.

Those masks were so uncomfortable, cheap and would break easily, but man do they look creepy when off. Just look at that, the lack of eyes is just frightening. A cheap mask and some cheap cloth is what made you become Baby Bop, but as a kid it worked, it didn’t need to be the most elaborate costume.

I especially like how there’s a cartoon depiction of what you’re supposed to look like, just in case the old lady who opened the door to give you candy wasn’t aware of who Baby Bop was. She now knows it’s just a friendly reptile who loves her blankie and not some Dilophosaurus from Jurassic Park.

As previously mentioned it was rare to see great costumes, but even in the era of cheap costumes Disney decided to go all in on this Gargolyes costume since it did include a few more details which is why it was called Deluxe Costume despite being made of the same cheap fabric. But that’s a bit unfair since the mask is clearly higher quality and you had inflatable wings which just look badass. 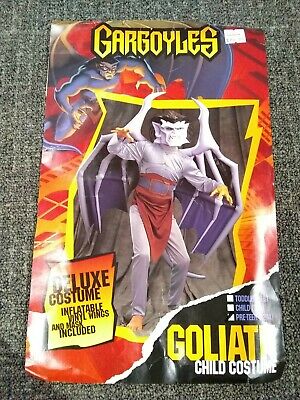 I can’t say I ever saw any Gargoyles costumes as a kid but perhaps I wasn’t looking for them, but the fact was that Disney did heavily promote the cartoon at first and you couldn’t go to a Disney Store without being reminded that they owned Gargoyles, so I can see how they got this deluxe costume made. 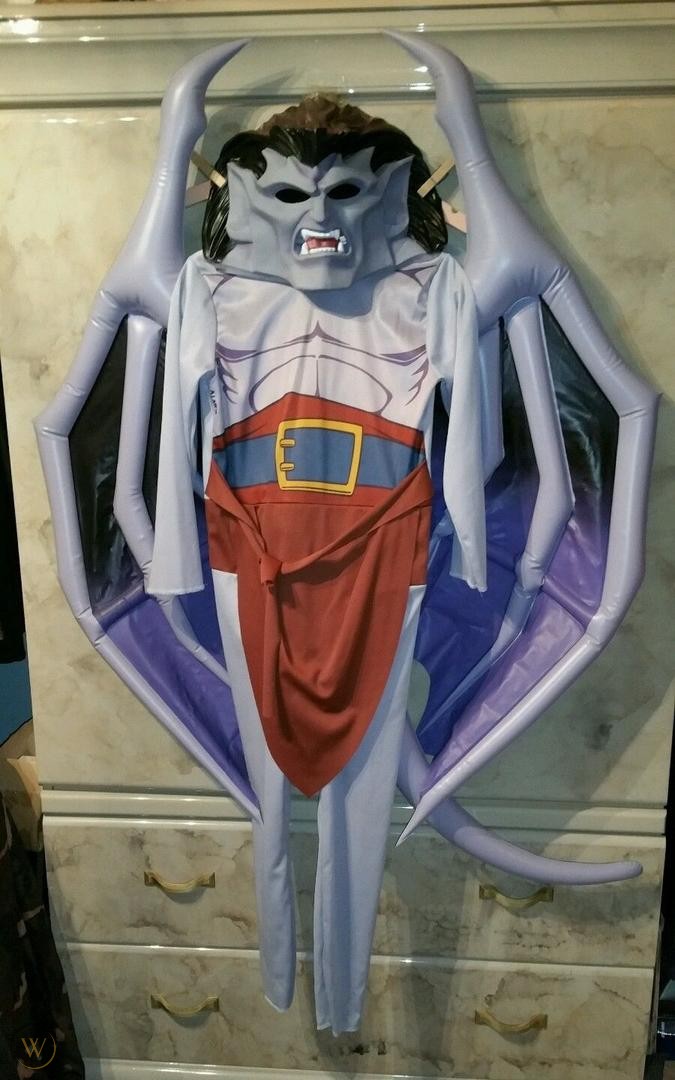 We’ll stop here in the mid 90s with Street Sharks and we see everyone from the TMNT rip-off team represented , and these costumes are amazingly good. What’s best is that you can see that they weren’t going for the most accurate look of the characters and were sort of half-assing it and yet because of the idea they went to they ended up accidentally nailing the look 100% just by having the huge jaws. 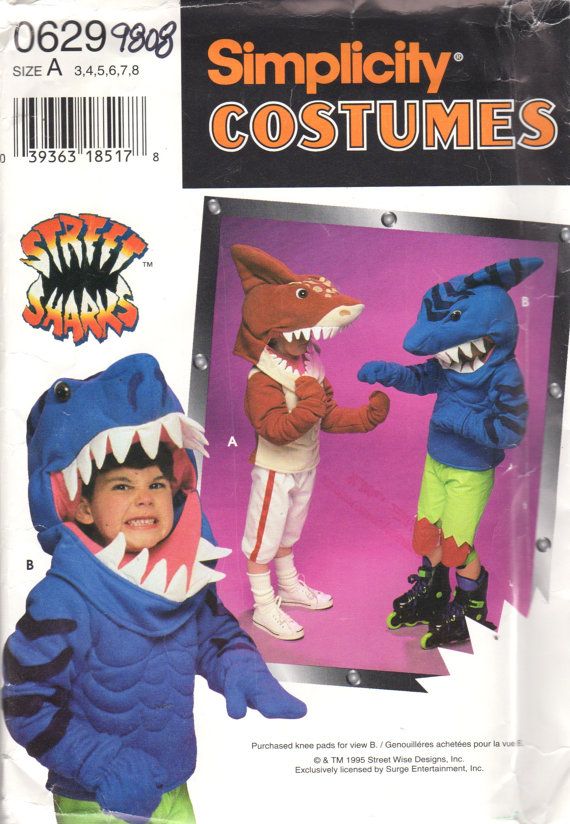 They also look comfy to wear so I’m guessing that perhaps they were great costumes for that as well, I’m just not sure how many kids wanted to be sharks for halloween or if any parents realized they weren’t just generic shark costumes but an actual show of mutated sharks. 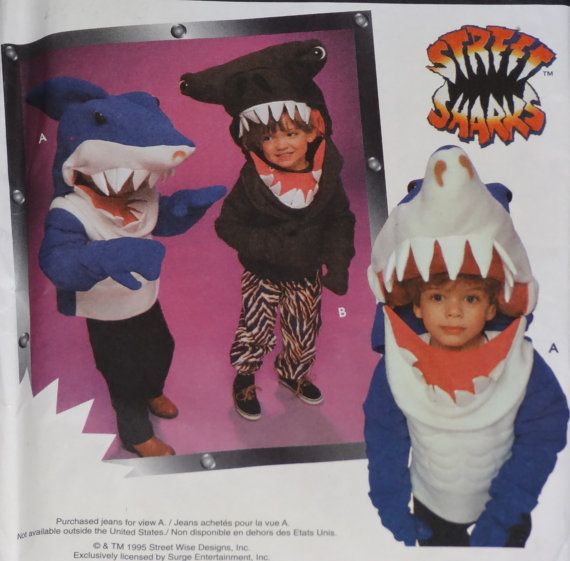 And for no good reason here we have Topanga and Cory ready for halloween with no costumes whatsoever unless we count that Cory is cosplaying as Doug Funnie. A bit anachronistic since that’s from the late 90s but who is keeping tabs, I’ll find no better use for that image.. 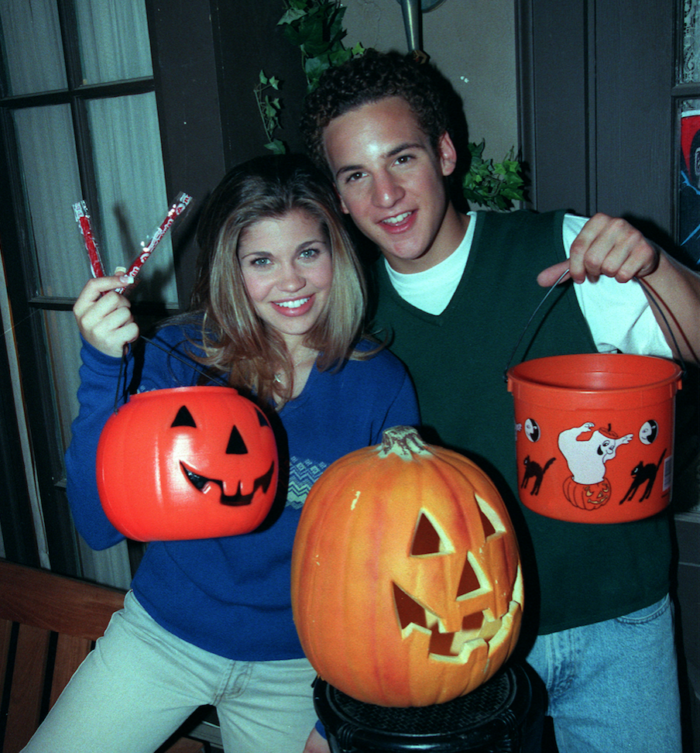