The Pokemon Fad in 1999 was something else, dubbed Pokemania or Pokemon Mania, it was something that the world was not prepared for. The Anime, Video Game and Trading Card Game were all a huge hit at the same time which made this fad much bigger than anything Teenage Mutant Ninja Turtles or Power Rangers had achieved in the 90s during their own fads. It’s been 20 years since the original Red and Blue hit the world outside of Japan so it’s the perfect time to look back at some news reports on how the adults were handling this new thing called Pocket Monsters with a special documentary at the end that does a perfect job at capturing the pokemon fad.

Here we have an MSN news report on Pokemon Mania around the time when Pokemon the first movie was going to come out so in Novemnber 1999. Fox News called it the Pokemon Flu also in 1999 and try to predict when it will die. KGBT 4 talks about the card game specifically in October 1999. 60 Minutes Australia talks about Pokemon in 2000 but things just arrived a little bit later there so it counts since it’s part of the same era

Finally we have what seems to be a genuine documentary made in December 1999 by KrazedupRecords while attending Evergreen State College. This is simply amazing as we get some footage that is not found anywhere else on youtube, this was also made way before video streaming online or modern video editing existed so a lot of hard work was put into it. It gives some information on what this Pokemon fad is as well as some news reports, it’s only ten minutes and totally worth checking out. 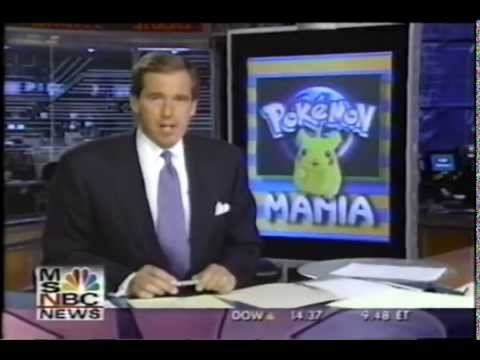