We hear a lot about dinosaurs and extinction but we don’t really see it portrayed very often as a way to raise awareness of climate change and how polluting the earth has caused a mass extinction of many animals not too dissimilar ones than the ones that came before. For this Jurassic Year no Earth Day it makes sense to take a look back at this special Dinosaur themed video that was made. Those who choose to do nothing about the climate crisis found it silly but it’s a way of putting perspective into things and making it easier to grasp to certain people. I absolutely loved it.

I like that it takes place in the united nations, it’s os random and had it released in 2022 it would feel like viral marketing for Jurassic World Dominion since it does have a raptor walking in the real world. The velociraptor CG is decent enough, it might not be the best but it could’ve been far cheaper so I think they did a great job with it since it’s only for a commercial. Unsure why a dinosaur is speaking normal but then again so do the Extreme Dinosaurs, hell those dinovengers were also fighting against global warming. 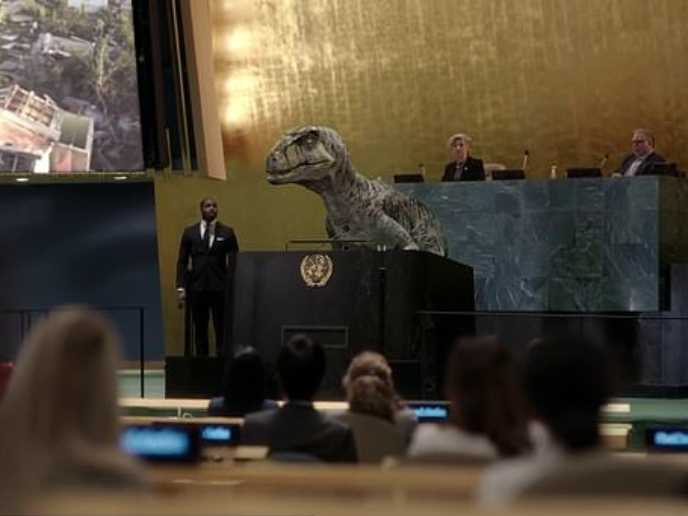 It’s odd how humans are all afraid for a second and then just listen to the wise velociraptor, maybe they thought it was philosiraptor. I do love seeing the raptor talk and it has a great message even if he mostly mentions extinction and other basic things. It seems it was filmed after the pandemic since it has some extra scens with people with masks. Dinosaur ends his climate crisis talk and everyone claps. What more could anyone ask for an ecological dinosaur ad?