Time can pass really quickly and here is one such example; 15 years ago “do u liek mudkips” was one of the most popular copypasta’s at 4chan. It felt fresh and so stupid that it was awesome, also back then there weren’t as many nostalgia ridden Pokemon fans which made the whole atmosphere better, besides the original copypasta which is below one other great thing it brought us was this song: 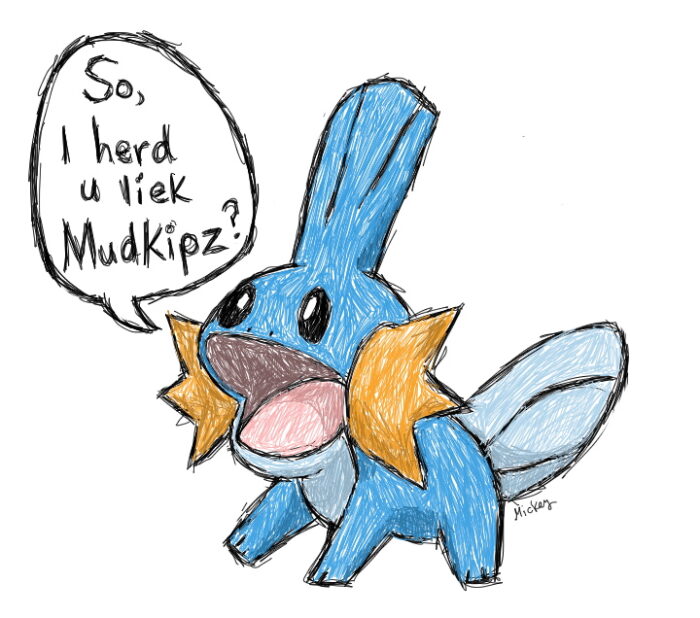 A rather basic song and yet it works, other songs that might have had more work into them eventually came out but they just can’t hit the basic things that the original simple video made, it was awkward, bad and fit the meme pretty well. In fact I’d rather listen to Mudkips for 10 minutes than the other songs.

Today being Halloween, I decided to fuck with the major retard at school when I came out of science for break. He was dressed as Ash. Knowing this was going to happen, I brought a Mudkip doll. Thus I started the conversation, making sure no one saw me.

“So I heard you like Mudkips…”
“MUDKIPS? I LUUUUUUUUUUUUVE MUDKIPS.”
“O RLY? So, would you ever fuck a Mudkips, that is..” (he cuts me off before I could said ‘if you were a mudkips’)
“OF COURSE.”
“Well I just happen to have a Mudkips here, and…”

Before I finished the sentence, which would have resulted in me hitting him across the face with the doll, he grabbed it. In one swift motion his pants were down and he was violently humping it. Not to get between a man and his Mudkips I started to walk away, because there is no way I’d be caught wrestling a half-naked crazy guy humping a Mudkips.

Needless to say, within 5 to 10 seconds, some girls saw him and started screaming. I cooly walked into a restroom, pretending nothing had ever happened; not that I had intended that outcome, but now that it was in play I didn’t want to be involved.

I came back out two minutes later, and like any wanton act on school grounds there was now a huge crowd around him. He was still fucking it and baying this real fucked up ‘EEEEEEEEEEINNNNF EEEEEEEEEEINNNF’ sound. Suddenly a scuffle broke out in the middle, meaning he probably did something stupid.

I asked someone what had happened. A girlfriend of one of the football players tried to get him to stop, but he bit her for trying to take it away. Someone called in a few football players (all dressed up like Road Warrior) who proceeded to pummel the shit out of the guy. Meanwhile the school police were freaking out and having trouble getting in to the situation.

A few minutes later the intruder alarm went off and we were all shuffled into classrooms. Over the intercom the principal announced that someone had thrown a flaming plush toy into the library. Uh.. what the hell.

So we were kept there and about 30 minutes later the principal came on again. This time he was saying that whoever was behind the beating should turn themselves in. All of a sudden this woman began yelling, “I WILL SUE YOU FOR DAMAGES. YOU LITTLE PUNKS, I’M GONNA SUE…” and it was cut off.

I asked an office later what had happened. Apparently his mother had come to pick him up and threatened to sue for the beating and ‘whatever else happened.’ The school threatened to counter-sue because of lewd conduct, inciting a riot, and starting a fight.

So I ask you: do u liek Mudkipz?