Usagi Yojimbo is a comic created by Stan Sakai that is most famous for crossing over and appearing in Teenage Mutant Ninja Turtles Cartoons and Toylines. And before the 2021 Netflix show it had never really gotten a cartoon on its own, but that’s not to say that they didn’t try. And at least because of the TMNT we were able to get many incarnations of Miyamoto Usagi in animated forms the last few decades. Here is a complete guide to every Usagi Yojimbo cartoon appearance. 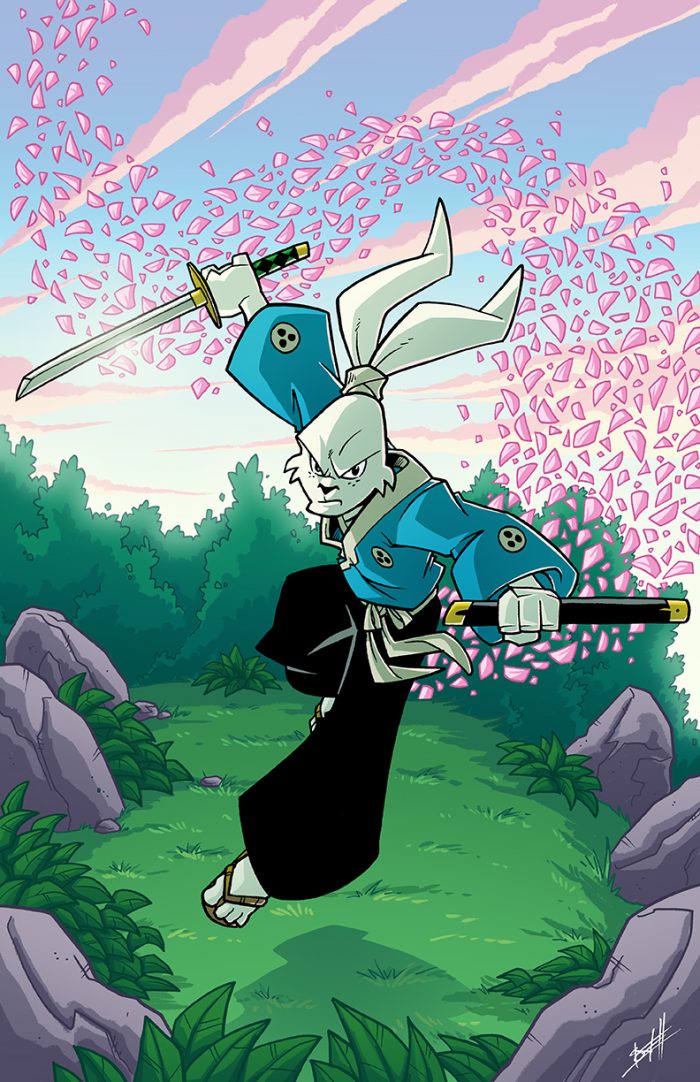 Usagi gets 2 episodes in the original 1987 TMNT show we get to see Usagi Yojimbo for the first time, he isn’t named Miyamoto here but the name of the actual comic as his name. He first appears in episode 50 where Shredder causes Usagi Yojimbo to be teletransported to the turtles dimension. 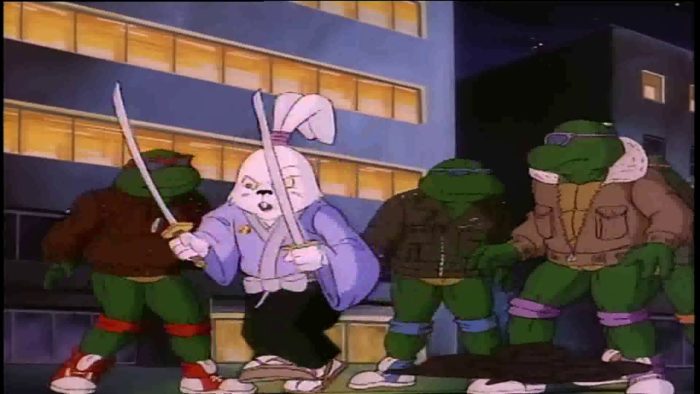 It’s a great debut for the character and it leaves with the turtles wanting to find a way for Usagi to return to his earth. We see him again in episode 52 Usagi Come Home wehre Shredder tricks Usagi into fighting with the turtles, things get cleared up in the end but Usagi doesn’t return home and sadly we didn’t get anymore episodes after that. 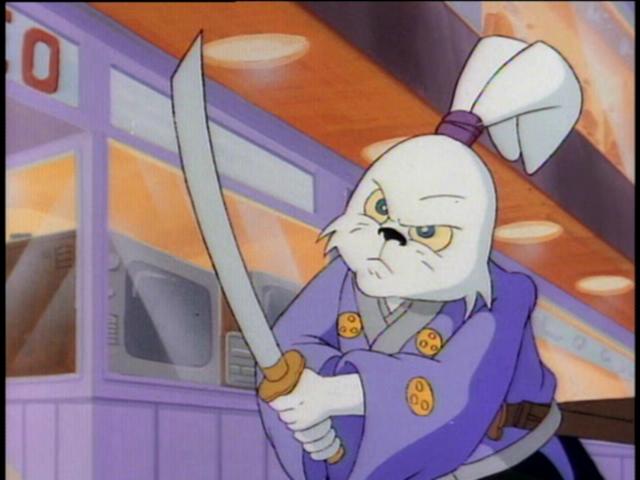 Usagis appearance on TMNT was meant to help Usagi Yojimbo get a show and they tried with a Space Usagi cartoon which you can watch the Space Usagi pilot here. Unfortunately that small video is all we have to show for it and well it looked promising. Some people say that the failure of Bucky O’Hare cartoon stopped networks into wanting a new futuristic rabbit cartoon but no one really knows. 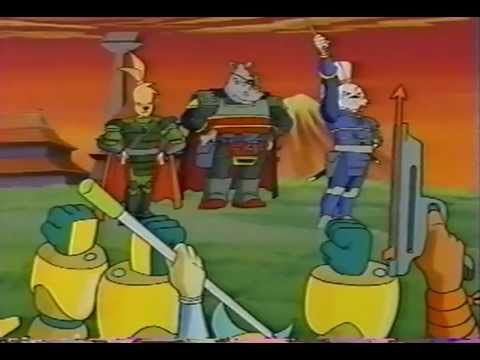 Usagi gets the most appearances in the 2k3 TMNT cartoon with a total of 8 episodes that he’s featured in, though he’s not really the main focus on most of those episodes like in the other shows. He first appears in Big Brawl Part 2 and also Part 3 and 4 (episodes 49, 50, 51, 52) but if you want to understand the arc perhaps it’s better to start since Part 1 even if he’s not featured there. The episodes deal with the turtles fighting challengers from different dimensions at hte battle Nexus tournament, there’s a conspiracy with Daimyo and Usagi who is also at the tournament befriends the turtles and helps them save the day. 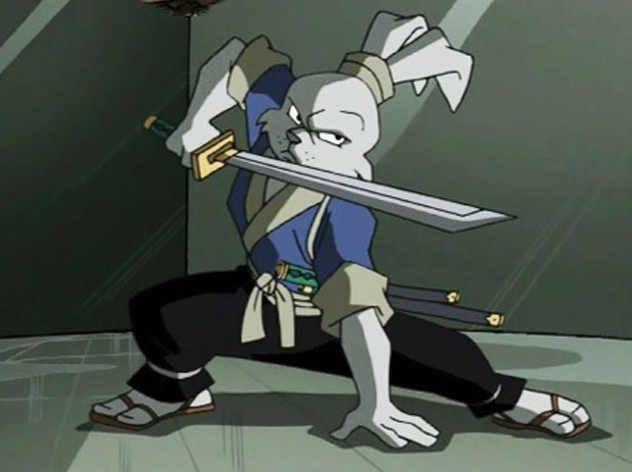 The second time they appear is in episode 64 The Christmas Aliens. It’s Christmas time and the turtles have a party and Usagi and Gen are invited for dinner and help fight the purple dragons who wanted to ruin christmas. It isn’t a big role but we do see them and they do fight. They also make another small appearance in the final episode 155 Wedding Bells and Bytes that sees April O’Neil and Casey Jones get married and Miyamoto is a wedding guest and he also gets a small fight as well. 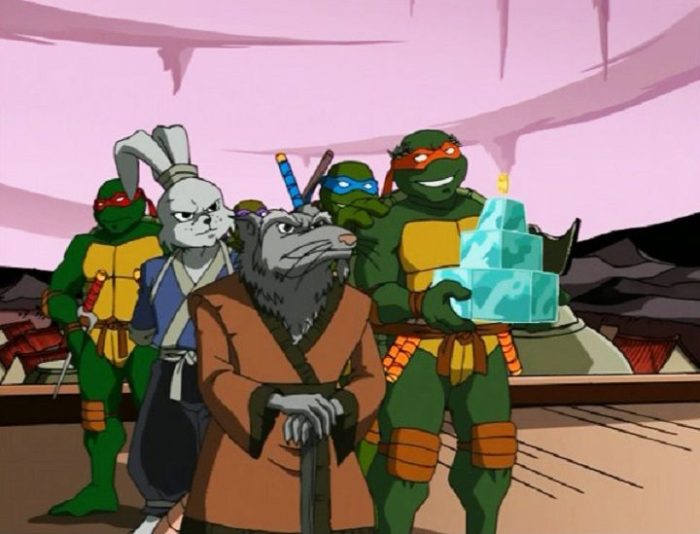 It isn’t until episodes 74 and 75 titled The Real World that Usagi gets the spotlight again and we get Leonardo travelling to an alternate Earth and gets to join with Miyamoto Usagi once again in a sequel story to the Battle Nexus arc. The last full appearance is in episode 91 called Samurai Tourist where Miyamoto goes to the turtles earth to help Leonardo but find out there’s an assassin after them. Overall all the appearances of Usagi in the 2k3 cartoon were really good. He was supposed to appear in the second season of Fast Forward as Space Usagi but that season got cancelled sadly. 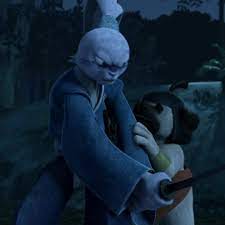 Usagi appears in a 3 episode arc in the 2012 Teenage Mutant Ninja Turtles show in episodes 111, 112 and 113 titled Yojimbo, Osoroshi no Tabi and Kagayake! In this story arc it’s actually the turtles who get transported into Usagi’s dimension. Here we have a story that more resembles the actual comics and they have to fight Kintaro the wolf-demon Jei. At the end of the arc Usagi remains in his dimension but they turtles do get to go home at the very least. It’s a fun story arc with the most accurate portrayal of Usagi to date and it leaves you wanting to see more of that universe. 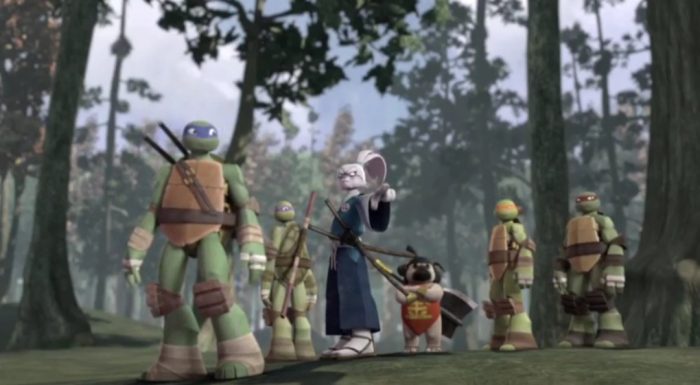 After all these decades we finally get a show based on Usagi, well kind of, it’s a descendant of Usagi named Yuichi and it’s set in the modern world. At the very least him not being Miyamoto Usagi is good in case the show doesn’t deliver it won’t taint the legacy and it can tell some new stories. There’s potential. 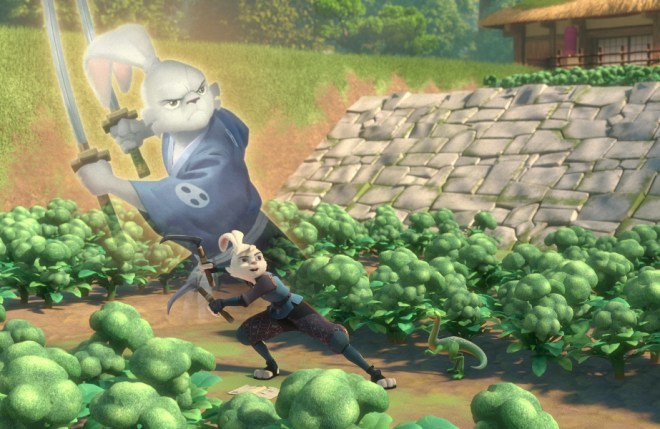 In the end we still hope we can get an actual animated series based on Usagi Yojimbo one day but at the very least he has not been a stranger to cartoons one way or another.