I like to post my thoughts on things a few days after their release to get rid of the initial reactions and all that hype that influences and skews your thoughts on said thing. The trailers for both the Mighty Morphin’ Power Rangers Mega Battle video game and the Power Rangers Movie teaser came out a couple of days ago and here are my thoughts.

The new movie looks like they’re going for a generic superhero film which I guess makes sense since it’s what’s hot but Power Rangers are too goofy for it to be like that and they need more cheese. They’re darkening it up to make it “mature” and from the teaser trailer it oddly works out so far and doesn’t look as terrible as all those gritty Power Ranger fan films that popped up a few years ago where things didn’t mesh together well.

I hope there are some martial arts in the movie but that seems like it won’t happen; now Power Rangers pretty much eliminated this element from the actual show more than 10 years ago and them having powers outside of the suit is also something in the franchise since the Disney era in the early 2000’s so it’s not something new to the franchise even if I’m not a fan. I can at least say that I’m happy so far and curious to where things go, I still think the tone they’re going for is a risky one since normal superhero movies are everywhere and the dark tone they seem to be pushing doesn’t necessarily fit Power Rangers if not done well but I’m hoping. People also need to remember this is a Power Rangers film and the concept itself needs cheese and also that this is just a teaser trailer made to be shown off at NYCC, we’ll get a better idea of what the actual movie will be when the first trailer arrives. Let’s see how things go with it but overall I’m hyped.

The new game is getting some negativity but I think it looks kind of cool..sure it could’ve been another thing like a musou game but this is the first Power Rangers game I’ve been excited for since MMPR Fighting Edition…It might not be the most innovative or greatest game ever but if it provides a decent fun nostalgic beat-em up then I’ll be more than happy. Now that I think about it we also had that Super Legends game which also had potential but failed but I can say I’m hyped for this game so far. Some speculation… 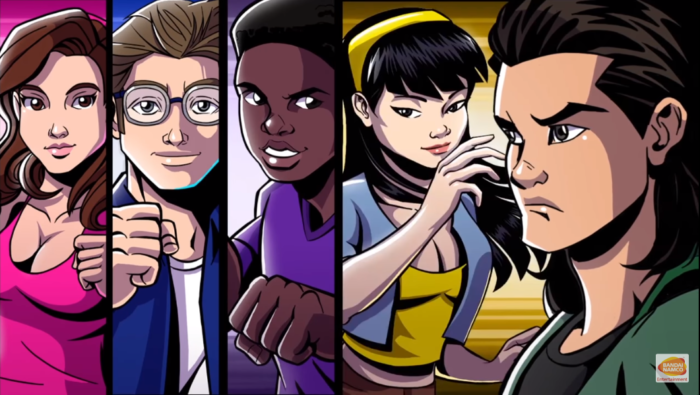 It seems mostly based on the first season of Mighty Morhphin’ Power Rangers but it includes Lord Zedd and the White Ranger I wonder if they’ll include only those elements of the second season or just those. They also mention Kat who apapeared in the third season but I find it doubtful that it would be included nevertheless if it did I’d be one happy fan. It’d be cool if it had Rangers of other seasons but that’s doubtful but we might get the new movie suits as unlockables. I think the story will be a very concise version of the show with the developers choosing their favorite monsters/storylines, probably won’t be amazing but more of a polished version of the 16 bit Power Ranger games. It doesn’t seem that they have gotten the original actors to do the voice overs but Jason seemed decent enough if it wasn’t a clip. Hell Johnny Yong Bosch might be in the game coincidentally and not because they chose him to do the voice of Adam. Color me hyped for this as well.