Barney the Dinosaur vs Thanksgiving

I don’t know why Barney the Dinosaur never did much with holidays besides Christmas, I would’ve guessed that with 268 episodes they could’ve had at least one of those or one of the home videos be thanksgiving themed. Regardless of this missed opportunity there is still plenty of Thanksgiving history with Barney, he doesn’t hold a grudge over being killed in one of the parades apparently. It’s always in these books that Barney seems to actually care about holidays, in this case Barney has thanksgiving and has BJ and babybop helping him cook. They decide to share their thanks with animals and give thems tuff which is a great moral actually and a nice twist. At the end after feeding and giving thanks to animals they go home and have thanksgiving dinner with some random humans they invited called “guests”. Whose house is this, and these stories.. I wonder if these stories take place in barney world when they’re stuffed animals. 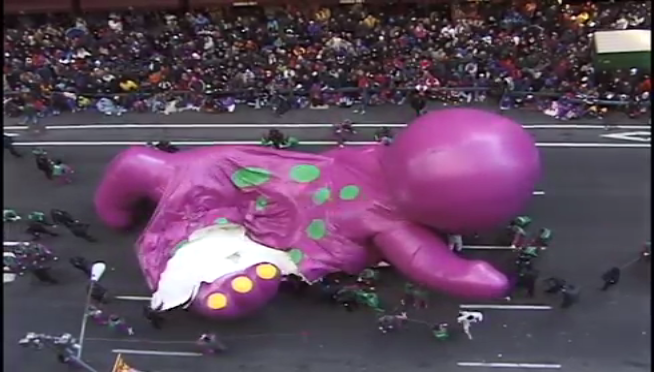 Most people are familiar with the infamous incident in 1997 where there were high winds,t hey lost control of the balloon and Barney was impaled by a street light. Apparently it traumatized children but I’ve seen no evidence of that and seems more of clickbait titles than anything real, though I’m sure people were scared they would die when they saw this humoungous balloon falling on them. With that said the Barney balloon was indeed awesome in his 9 appearances between 1994 and 2002, I love it does seem like a giant dinosaur is aroud manhattan, that was well done, who knew it’d be Barney. He had 3 more appearances with an upgraded Balloon with helmet and tromphet one for 3 more years. 2003-2005 as a ballon thoug I do like his upgrade that he graduated to a Parade leader I do not like it as much. With that said the costumed Barney also made an appearance in many Thanksgiving parades, sometimes in the pre-parade and sometimes outright performing songs. He would change the theme from the obvious Christmas ones to Circus themed floats. 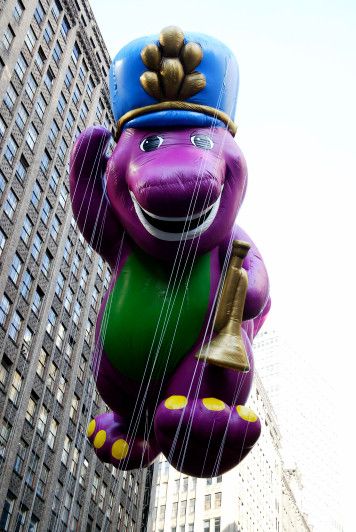 I find the themed floats neat and that Babybop and BJ were also there in specifc years at least. More Christmas Barney can’t be a bad thing and  you have anniversary ones and what not and you can find them all on youtube from 1994-2004.  He promoted movies, his shows and whatnot. Sadly his clout diminished and he was no longer there after 2004 though he did make a cameo appearance in the 2011 parade for the anniversary float featuring all the other characters that for the most part people have forgotten about.

The only reason I’m not taking a look at each individual year which was my original plan is that there just isn’t much there to comment, they get one random song according to that years floats theme. Still odd that despite all his history there was never an actual Thanksgiving episode, a fall / autumn episode is the closest thing we have. Let’s see what other interesting tidbit of Barney I can cover next.