Attack of the Show is coming back in a revival on the new G4TV so it’s the perfect time to take a look back at the original G4 run of AOTS. The show went through different eras and it should definitely be looked at like that since each era had a different take on what the show was like. At the very same time you could always tell that it was still Attack of the Show. Because of this its roots as an updated rebranding of the original TechTV show The Screen Savers were always in there in one way or another. With lots of hosts including Kevin Pereira, Kevin Rose, Olivia Munn, Sarah Lane, among others, let’s take small rewind to see what made Attack of the Show so unique, ahead of its time by being worthy of being a geek culture milestone despite its rocky beginnings.

Attack of the Show began as a rebranding of TechTV’s most successful technology show The Screen Savers but when they merged into G4TechTV the show began changing. It now filmed in a new location, some of the cast started leaving starting with Leo Laporte but in the end we were left off with only a few TechTV originals Kevin Rose, Brendan Moran and Sarah Lane with G4’s Kevin Pereira as the main host. The Screensavers deserves its own article so we won’t get into it too much except for the last episode of TSS before the rebranding. By this point the screen savers had changed a lot; it focused less on technology and more on geek culture, it really felt like a different show in general. So in a way it made sense to rebrand it since it was becoming something different. 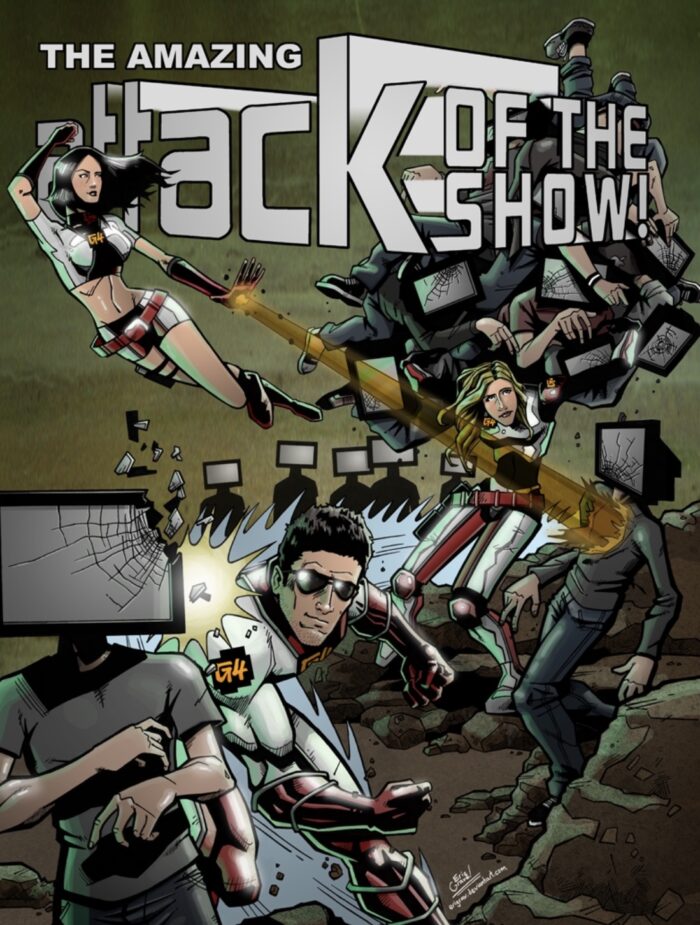 Attack of the show began right after TSS ended and with this we begin the first era of AOTS with Kevin Rose. Unsurprisingly it was basically just like the last era of The Screen Savers but in a new set. Kevin Rose is the one trying to bring most of the tech talk to the show but in general there seems to be a bit more liberty in other segments taking over the tech sections and not being bound by it. In a way these episodes are not as entertaining since there seems to be a mishmash that doesn’t blend well with the more geek pop culture aspects and the more tech aspects. 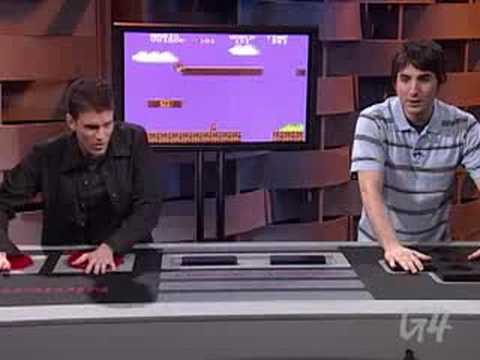 But the DNA of TSS was still there which was both good and bad, Kevin Rose was a bit awkward and unfunny or and didn’t have much chemistry with Kevin Pereira who was the better host of the show. I do like how he completely burries AOTS accidentally in dialog in his last episode in his explanation that he’s going to do tech endeavors instead. AOTS in the Kevin Rose era was a bit more pop culture version of the screen savers, more relaxed and because of that a good rebranding, but still not what people think AOTS us and I agree. 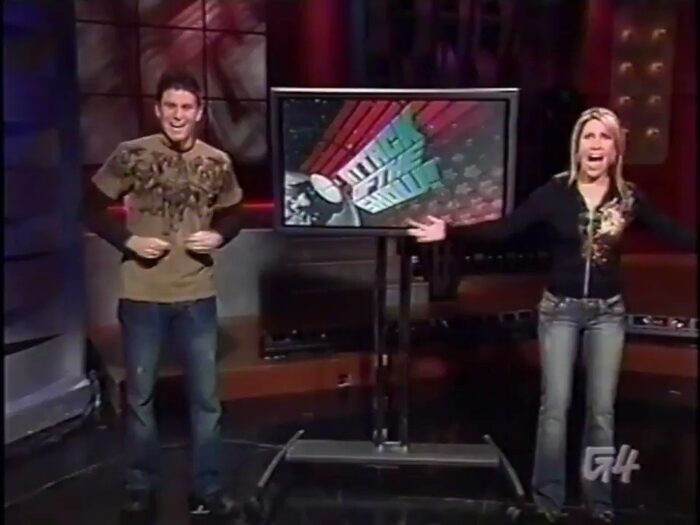 After that we get a few guest co-hosts including X-Plays Addam Sessler but in the end cast member Sarah Lane became the official cohost and she fit the role much better than anyone else. She always had great chemistry with Kevin Pereira and when she was host it flowed much better than with Kevin Rose. The Sarah Lane era resembles more the AOTS people rememeber since without Kevin Rose the tech talk was less techy and more “fun” and that’s also when they began expanding on more geek culture stuff. It’s worth noting that Brandon Moran was always there and apparently since the days of TechTV, he has great deadpan humor but sadly the show didn’t allow his type of humor to shine since many times it seems awkward when it’s really just meant to be humorous. 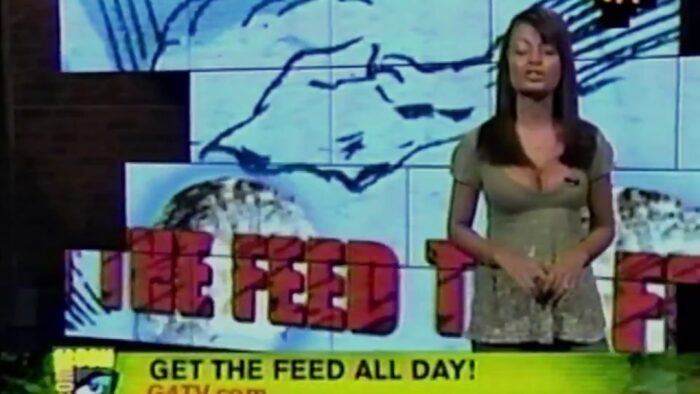 The Sarah Lane era of the show was very fun but eventually she left and we got a new cohost with Olivia Munn. The first few shows she is just getting used to the new role but she quickly gets what AOTS was and the Olivia Munn era is the one most people remember. This was Attack of the Show at it’s greatest since it knew exactly what it was, without Sarah, the last few restrictions of seriousness were gone and most tech content went away for more juvenile fun. I don’t mean this in a bad way either since the show was just overall more fun.

Kevin Pereira just had tons of chemistry with Olivia Munn which lead to many classic moments of the show. These classic moments were often rerun and repeated over and over including in many “special” episodes or best ofs. AOTS was immature, meant for a specific audience and it succeeded. It gave us geek culture before it was cool to be a geek. It got undeserved hate because it killed The screensavers but it seems now more people remember AOTS than TSS. And this wasn’t TSS, it was rebranded for a reason. 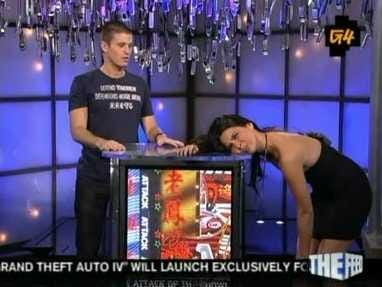 The show was creative and many “shows” online on big websites and youtube channels are just inferior copies of what AOTS was. The people involved with the show obviously cared and did a good job, we had fun segments with Blair Herter to talk comic books, Chris Gore to talk about DVDs and movies, Kevin Pereira had great humor and worked very well with most people. It felt amateurish btu that’s hwat made it great. Olivia Munn wasn’t afraid of doing crazy stuff for the show or ashamed. She was always game for anything that would be entertaining, sexy, funny and she wasn’t overdoing it unlike most “geek culture” e-celeb thots of today. 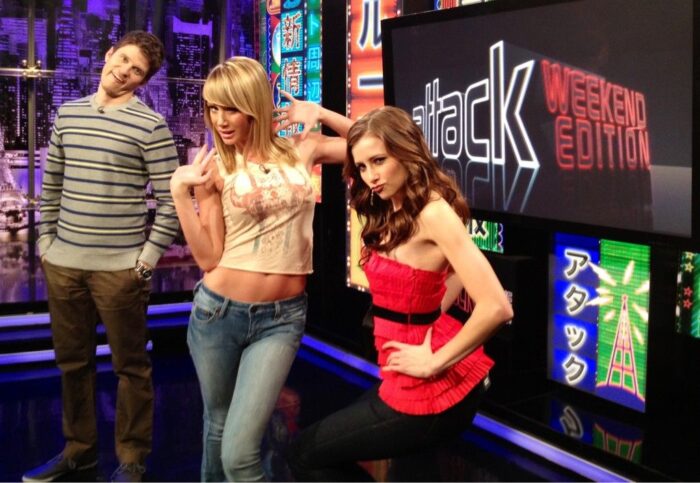 After olivia munn left we got some new hosts with, Morgan Webb was there but we finally got to the Candace Bailey and Sarah Underwood era. They were sexy and tried their best but there just wasn’t as much chemistry with Kevin Pereira. There were still some nice moments here and there in this era but it was no longer the same. When Kevin Pereira left it was really the end of an era since they were not able to keep the show alive with just inertia. I give them credit for trying, Candace Bailey, Sar Jean Underwood and Matt Mira were decent hosts but not enough to lead the whole show. Around the Net, DVDuesday, fresh ink, epic fail, the feed, Happy Tree Friends, Layla Kayleigh, all fun segments AOTS had. 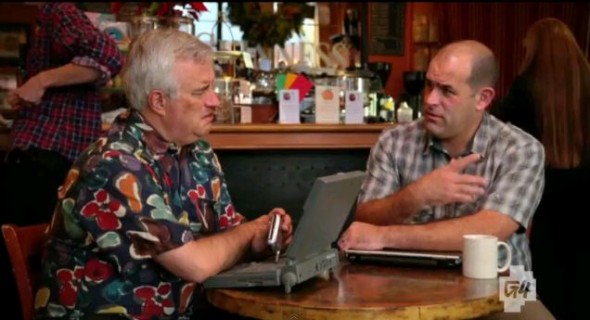 Unlike X-Play, the last episode of Attack of the Show is really entertaining, it has fun skits and a fun way to look back at the whole show’s history whiteout it being just a clip show and of course it ends with a huge tribute to both TechTV and The Screen Savers as AOTS was only a dream. It was great, the show always had callbacks to TSS over the years as mentioned before and with this they gave a good ending to both AOTS and TSS which didn’t get one when it was rebranded. AOTS was an evolution in a way to TSS, less techie and more pop culture / geek culture but an evolution even if a less mature show and it is more The Screen Savers than TWIT’s revival by Leo Laporte The New Screen Savers was. Even bringing Kevin Pereira back I do feel AOTS was a product of its time so I doubt any revival would be able to do it justice.