As a kid with such software available to my hands as Napster and a love for Nintendo, it didn’t take long for one of the terms I searched for would be “Zelda” and sure enough I was able to find something. Zelda Rap by 5-3 Federation. I downloaded it and after 20 minutes or so I got to listen to it. 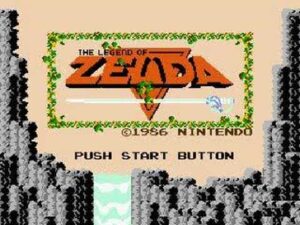 The rap uses the original The Legend of Zelda intro as the beats as he raps about the game and making random geeky references. This was more than a decade from when geek culture was “cool” so it really was done for the passion for the game. There are tons of zelda raps now but this is the original and if you ask what an odd choice well remember that the original commercial had a zelda rap, though I guess that would make it the original, nevertheless check it out:


Lyrics:
Back when I was rising up the suckers used to play
Acting like that they all that and never knew the way
To Ganon’s Castle, Level Nine!
Link had the power, I had the mind
I held the magic sword way up high
I knew I could win, I didn’t have to try
The NES Advantage was on my side
I take evil, for I ride
I smoke the tektites like they was hooch, cuz soon I know I had Zelda’s cooch
I walked to meet the motherfuckin’ Ganon
He disappeared like a ball from a cannon
I raised my voice and I shout out loud, I got the Triforce and I am proud
I finally hit ’em with, the silver arrow
And you know I leave the rock
Even though the road to good is narrow, Zelda’s on my jock
‘Cuz my balls are big to be this brave
Princess Zelda is the one I save
Now I am playing with power,
The 1980’s will never go sour!
Yeah!
Who would’ve thunk it
it must’ve been a drunk kid
someone who could pump it with a beat so funky
Hell yeah bitch you heard it here first
Recognize now or you gonna need a nurse
to stitch up the wounds from the K and the B
Re-define the word originality
Can’t Fuck with this shit 1986
we was in the mix and Zelda was the fucking fix
Now we bringing this shit full fuckin’ circle
Can’t hang with this, go hang with Steve Urkel
Cause we regulating hardcore, now you know what’s in store
Beggin’ for a little more, the ladder was in level four
Realize this, I’m creepin through the mist, with a fuckin’ triforce and I’m muthafucking pissed

Now you realizing this beats hypnotizin’
My skill keeps rising all this shit just ties and
Step back I got the player’s guide, fucking game genie with the codes inside
Skills save hyrule and the rest of mankind
all this shit, be stickin; in your mind
Now you understand the controller in your hand
You almost beat the game, but you ain’t the fucking man
So leave it up to me, and back the fuck off
You think you hard core, but your skills be soft
I piss on your cartridge, throw it in the trash, take it to the pawn shop for some cash
You don’t belong on my NES, I grab your controller, to show I’m the best.