We continue with more a second summer version of Music Match where we take a look and recommend three music videos / Songs for you to enjoy during the summer. You can check out the first edition of Summer Music videos here as well as Vol. 3 and Vol. 4 which also feature some summer songs and videos. 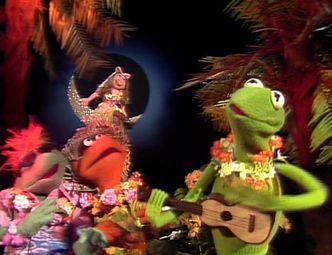 As many kids I was introduced to the awesome Enigma Project through Pure Moods commercials that aired on Nickelodeon. I can only imagine how many of those contemplation cassette tapes they sold but at least I can’t say it was bad music. This song being nostalgic to me now makes the lyrics even more meaningful since back then I was indeed innocent, no Raves back then. Song is still great and the music video tries a little bit too hard to be artistic and yet is now just full of dated special effects. Can’t fault them though since they do have a gosh darn Unicorn through out it.

Kokomo by The Muppets

Surprised at the lack of a decent quality version of this song as it was quite popular and played on Nickelodeon quite often. It was a hot summer but between shows you could enjoy this Kermit the Frog along other muppets cover of The Beach Boy’s classic song. While the original is quite good, I have to say I still have quite a soft spot for this version and may consider it the superior version. Still to this day when I think of summer vacation on a beach I remember this song. I will not die a happy man until I visit every single island or beach featured in the song.

The Tokens- The lion sleeps tonight

A live version of the amazing version of Wimoweh by The Tokens that basically became sort of a theme song for Disney’s The Lion King, even if that already featured enough hit songs. I remember listening to this on the radio at nights during that summer that the Lion King came out. I’m not too confident this “live” version is actually live but at least it makes for a retro music video to share.