Thanks to Virtual Reality visiting Isla Nublar home of Jurassic Park has never been easier and thanks to the Jurassic World revival and all the VR content available for it. Here we’ll take a look at the history of Jurassic World in VR and everything that’s available which includes some movies and games. All of these are official and not all are too difficult to experience yourself if you have the right gear So let’s feel like Alan Grant when he saw that first Brachiosaurus as we make our way to a virtual Jurassic World. 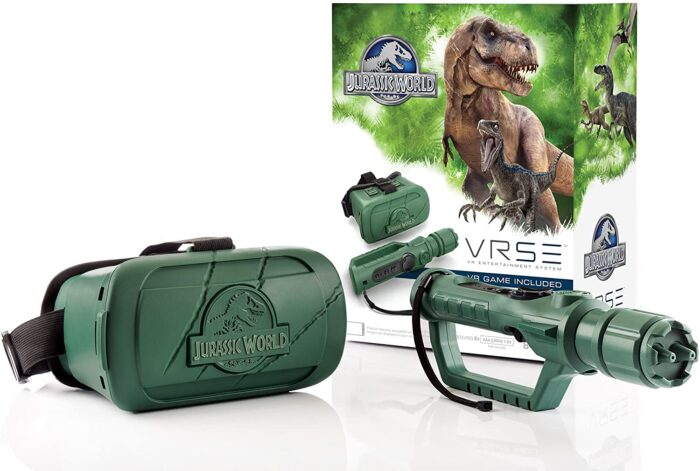 Return to Isla Nublar for an intense Jurassic World VR gaming adventure. Use the game-themed motion controller to fend off hungry Velociraptors in the jungle or hold off a pursuing T-Rex as you speed towards the Visitor’s Center. Can you complete your mission and make it to the rendezvous point, or will you be devoured by the island’s most dangerous predators? 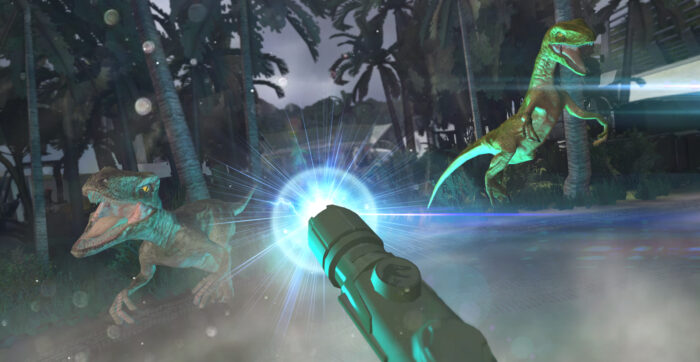 This is a VR App for your smart phone and anyone can download the it but you can only play it if you bought the package since you need the bluetooth motion controller by VRSE. The package includes a plastic the plastic cellphone VR headset for you to put your cellphone in and a plastic attachment for the motion controller. Both of these are Jurassic Park themed which are cool enough but sadly smartphone VR isn’t the greatest experience. The graphics are basic since it’s a mobile game and it is a shooter game that you use your stun baton to defend yourself from the attackind dinosaurs. The game is rather basic and not as responsive as you’d hope but it isn’t too bad and I was impressed by all the scenarios it had, It’d be worth it if it was available in an actual VR store. These events would need to take place during the Jurassic World movie if we’re looking for a timeline.

The Jurassic World: Apatosaurus VR Experience allows the viewer for the first time to see what it feels like to be in the presence and close proximity of a living dinosaur and to experience a sense of connection with it – with the mixture of awe, striking beauty and danger that this implies.

This VR Experience is one of two 3D 360 degree video released by Universal on the different VR stores to help promote Jurassic World Fallen Kingdom. You can now find them both bundled as one app in various stores like Oculus. The Apatosaurus video like the description implies actually feels like you are in that world experiencing seeing a real life dinosaur up close and it’s a great experience despite the low quality.

Dinosaurs have overtaken the turbulent Isla Nublar, but the threat of a natural disaster erupting looms eerily over the island. Follow Blue, a highly intelligent Velociraptor, on her quest for survival, using VR to experience her extraordinary sensorial abilities and awareness as she scours for food and water, searches for signs of life, and fights against some of the island’s most threatening predators.