Stan Lee insults Rob Liefeld and Todd McFarlane because he can

Like most I like to think of Stan Lee as this nice old grandpa type character even if we know he was not such a nice guy in the past. I’m also a fan of Rob Liefeld’s and Todd McFarlane’s work since I enjoy comics in the 90s even if they’re mostly made fun of now for being too extreme. 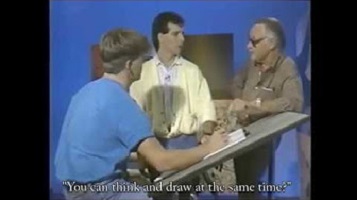 This video from the 90s is awesome, I guess it’s a 20 minute tv show where they draw and this 3 minute clip takes all the instances of Stan Lee dissing both these artists for how ridiculous it is and I don’t think it was mean spirited, it just seems that way because of the edits but fun jabs as these two were very famous around the era this show was made. McFarlane even seems to be enjoying getting shade thrown at him for what he was doing. Nevertheless it’s a very fun video worth a watch regardless of your opinion of any of these artists.