The Nick CG show had a crossover with the original TMNT show from 1987 by Fred Wolf. In it you can see the original toon turtles in 3D and the CG turtles in 2D. It was definitely a cool episode that brought a lot of nostalgia. While the original turtles looked odd in CG, it was still neat to see them being interpreted like that. So why don’t we take a look at a remake of the original iconic opening re-done in CG? 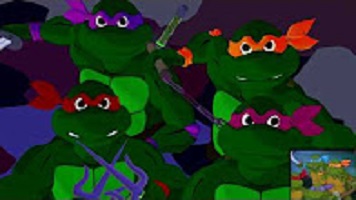 It doesn’t quite fit the look the original turtles have on the CG Nick show since it is a much more realistic take on them. The amount of polish is amazing as everything looks so professional. It definitely misses a little bit of the mood of the show though by taking these artistic liberties. Now I don’t fault them for it but it’s worth pointing out. Oddly enough this isn’t the only time the intro has been remade in 3D.

User TurtlePower! actually worked on doing the intro for many years. While this version is a lot more amateurish, the proportions of the turtles and the tone in general seems to fit the original show a lot better. In fact the version of the original turtles in 3D is kind of a mix between this style and the earlier intro. Amazing what one fan was able to do with what he learned. He wasn’t happy with only doing the intro as he has remade entire episodes in CG. Here we have the episode “A Thing about Rats” re-done in CG / 3D!

This is simply awesome and it’s not all he has done, he also re-did the entire 3 part season 3 finale in 3D and he seems to be improving it, as he has done with the intro in the past, here we have 2 new versions of the 3 episodes.

That’s not all, he even re-did the meeting of the Nick CG show and the original toon which was in 2D in 3D and also an original story. So, his channel is one worth subscribing to and hopefully we see more fan favorite episodes being worked on.