When Reggie Fils-Aime went on Jimmy Fallon’s The Tonight Show to show off Super Mario Run and the Nintendo Switch he also brought in Miyamoto. As some of you know Shigeru Miyamoto loves music hence why he made the much hated Wii Music game but it’s really one of his passions probably more than video games so here we see him palying the Super Mario Bros. theme with The Roots which is nice. 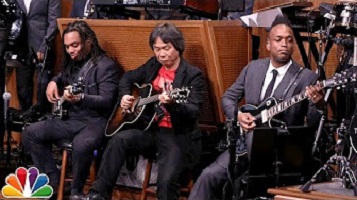 Funny how this is something that was overlooked at the time for the most part as the unveiling of Super Mario Run and the Switch all got more attention but as years pass this will be something more interesting for people looking for something they haven’t seen like Miyamoto’s Acoustic guitar rendition of the SMB theme. He also showed off his skills at figuring out how much something measures just by looking at it.