In 2003 THQ decided to release a vehicle combat game using the license of WWE on the PS2/X-Box/Gamecube. Why they would ever do that is a question that we may never know. This wasn’t during the attitude era when wrestling was a hot product for them to try to spin-off the license into other genres but at a time when even wrestling games themselves weren’t selling what they used to just a few years back. This was also released a few years after Twisted Metal Black which defined the genre for that generation of consoles. 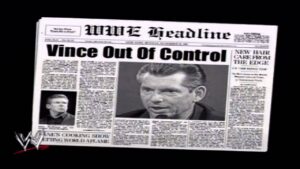 None of this stopped them from releasing it and well it didn’t quite fare well in the reviews department but maybe it was just a pet project of the WWE, after all they do like to experiment with different things. While there isn’t much information on any of this, the amount of details in some things seem a little odd if it had just been a cheap cash-in, which it is but that’s beside the point. 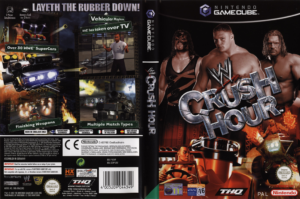 The game deals with Vince Mcmahon buying pretty much all of network TV and having all these WWE themed shows of other stuff, oddly enough that’s exactly what they’ve tried to do in the past and the WWE Network eventually became a thing even if here it was supposed to be fictitious. You have everything from Kane’s cooking show to Crush Hour which is a vehicle combat game. 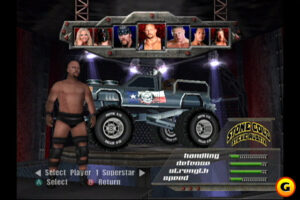 Each wrestler has a themed car, some being more fitting than others that seem random and they all include their entrances. It’s those silly cutscenes that include the wrestlers and commentators and such crazy ideas which are a bit of a parody and yet hit a little close to home that make these short FMVs a must watch for WWE fans, enjoy.