To build hype for the third part of the Jurassic World trilogy Dominion we got a few interesting things including short films and motion comics that depict the world trying to rebalance itself and learn to live with dinosaurs. We got 4 issues that tell one overall story arc until it’s over. It’s not very lengthy at all at it being under 15 minutes to watch everything but it was still a great idea so here we are taking a look at these events. 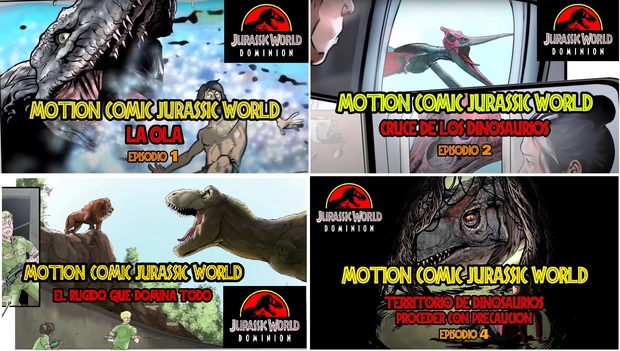 For the most part all of them take some sort of reference from the movies as a starting point and they all take place not long after the ending of Fallen Kingdom with the general theme of humans and dinosaurs being forced to coexist. The first motion comic #1 is A Rising tide and it takes the event of the mosasaurus at the beach from the ending of Fallen Kingdom. It begins with Ian Malcolm and it’s really cool to see perhaps the first big dino encounter the world got. The story overall feels like something you would’ve read in the IDW comics.

The second motion comic #2 is Dinosaur Crossing and it’s the only one not based on a previous event or scene from a movie. You can see people are getting more and more tense about finding more dinosaurs on the mainland and concern is rising. They honestly do a fantastic job in setting things up for the movie. The story is a bit basic with one or more dinosaurs being on the mainland and a man encountering a fight of a triceratops with an ankylosaurs.

The third motion comic #3 called the roar that rules it all gives us two shorter stories with the first one giving more context which at least for me was really needed since it didn’t make much sense from the ending of Fallen Kingdom. It’s the zoo scene of the T-Rex roaring to the lion, it’s nice to see what actually happened while also a bit cheesy in the movie here it just works and it’s nice to see the king of the jungle meet the king of the dinosaurs. Unsure how they’re supposed to say that they can’t catch the dinosaurs or at least the Rex but whatever suspension of disbelief. we then get an extra story of pteranodons in las vegas which is also short but sweet.

The fourth and final motion comic #4 is Dinosaur territory proceed with caution is a sequel to what happened after the battle at big rock, telling us what happened after the battle which is much appreciated to see the aftermath. We get Rebecca Ryan who has been the reporter basically helping stitch the ongoing story arc of the 4 motion comics and keeps the continuity between them by reporting the more frequent dinosaur sightings. It’s a fun action packed story that ends amaingly well with a great cliffhanger as we see the reporter stuck in this new reality.

In general some comics look weird animated and not like a comic at all and it would’ve benefited just being an animated short even if still lacking great animation. Keeping the comic look actually hurts some of the shorts or some parts of it since the animation looks weird. Luckily that’s not in all of them, the animation gets better as does the comic format, Luckily that’s not all of them, some of the motion comics are used much better and have very well done animation and can overall look cool. So the quality was all over the place but you can overlook the flaws on the bad parts. So it’s a weird motion comic.

The music and effects ranger from alright to really well done. The stories are very fun and much better than the two Jurassic World short films we got, they took a cool concept and made it work. These shorts actually feel like they would’ve been a really cool Jurassic Park cartoon and better concept than Camp Cretaceous with more room to tell stories. I’m surprised we didn’t get something like this but perhaps we will, I also wish we had gotten another batch of motion comics.