Jackie Chan had been trying to hit it big the West with various movies but it really wasnt until Rush Hour that he became a big name in Hollywood and we started getting Jackie Chan movies galore. Which was both good and bad as we ended up seeing. It was his chemistry with Chris Tucker that made these movies so memorable and fun so we’re taking a look at the Rush Hour Trilogy that brought over a new era of Jackie Chan movies. 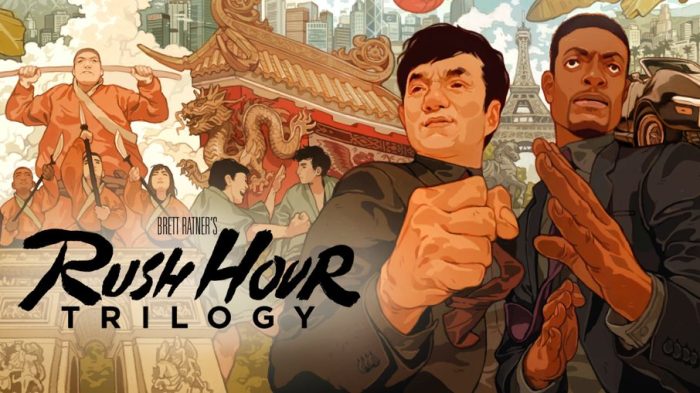 This movie still feels very much like a 90s movie, there is no heavy cg usage and it has a gritty setting. As I mentioned the chemistry between Jackie and Chris Tucker is amazing and even to this day the movie is hilarious which makes it an instant classic and fun to rewatch. I like that the whole franchise is named afer one quick police stop, rather random but a good name. It’s not only a funny movie but it has good action even if you could tell that Jackie Chan wasn’t doing as many crazy things as he is known for. The plot is good for the movie and lets you go through it without questioning it much. 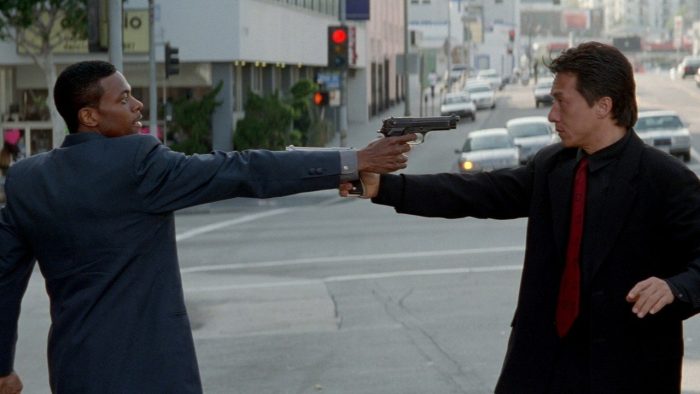 In general the movie has so many great charactesrs for chris and jackie to play off of, I actually feel they weren’t used enough and should’ve been used more in seuquels. So while perhaps not the best Jackie Chan fight scenes you still get some cool stunts. Jun Tao is a good villain.

This movie was my first DVD and I felt I was living the future with the menus and quality. I was hella excited for it being a big fan of Jackie and Rush HOur but I was disappointed after watchign it. I tried to watch it a few times to see if I liked it but it didn’t. I think it makes perfect sense to have the movie be set in Hong Kong and have a man out of his normal comofort zone story this time with Chris Tucker. Unlike the first movie it starts with a comedy segment instead of action but I’ll let it pass since since it’s a direct sequel to the events of the first one but still it doesn’t feel as exciting and the plot never gets too interesting. At least we still have the humor and great chemistry. It sucks that the martial arts took a step down but then again it wasn’t the biggest aspect of the original. I don’t hate it as much after rewatchig it as the movie is still cool, just not as good in any way to the original which is a classic but it can still be a decent enough sequel still being entertaining and funny.

I didn’t remember much of this movie, i think I remember liking it more than 2 but coldn’t recall anything really. The set up of how the two meet again is fine, nothig special but it works to get the plot going. The movie doesn’t feel like it was made in 2007 and almost feels like a sequel that would’ve b been made a year after the original. But talking about weird timelines if we analyze it. It’s only been 4 years since the 3 years after rush hour 2 and rush hour 2 is a straight sequel of 1 so Rush Hour 2 takes place immediately after Rush Hour 1… So why is the daugher of the politician so much older, like an adult here and before she seemed like a little girl, even if she had been 14 which seems too old with how she acted in Rush Hour 1, and she were 17 here she’d feel too old looking. 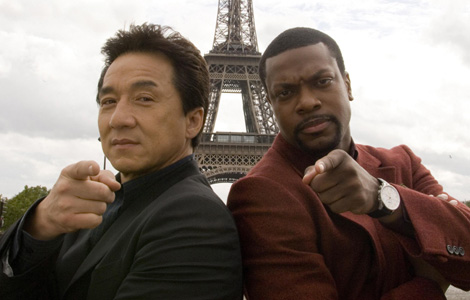 Whatever. Paris is a different setting and France is cool. This time both of them are in a different country and it brings something fresh at least. You can still feel the great chemistry between the actors and the movie is still funny, just not as funny as the two before, and the action is also a downgrade from the two previous movies. In fact there might be more action it’s just not as good so it feels like it’s less actiony. The movie is not too fun and the plot is also worse with the French setting helping out at least giving something new for the two detectives to interact with. The movie is a bit more dramatic than the two preivous ones despite the first two movies having a more genuine personal plot. The movie feels different though it’s not necessarily in a bad way, it just happens to be a bit more boring and still ridiculous. The French Taxi Driver is fun and the final fight at the Eiffel Tower coudl’ve been better but it was still great to see. The ending is similar to the previous two movies, same with the villains. Definitely the weakest.

I don’t know if a Rush Hour 4 will happen, Jackie Chan and Chris Tucker always flip flop around it saying they do want it but reasons. I don’t know if in today’s world we could have the humor these movies used to have which would suck but still I’d love to see a fourth take on it and see if they’re able to have that chemistry again. sjw wouldn’t let a new movies witht he humor it has. And it’s the chemistry that made the movie work, there’s a reason no one talks about the Rush Hour TV show and despite being a completionist I feel no inclination to watch it either since I don’t think there’s anything there for me. If I want another Asian with Black Man take I’ll just watch DMX & Jet Li instead.