Today is Thanksgiving so let’s take a look at some bumpers from different kids programming blocks and enjoy what they had to offer. I can’t say Thanksgiving ever brought the AAA quality commercials segways but they are all we have so screw it, we’re taking a look at them today.

Kids WB had some great bumpers and since they had a weekday block it allowed them to have some Thanksgiving ones as well, I can’t say these are the most creative ones they ever did but they are still cool.

Remember the awesome Zoog Disney stuff? Well they didn’t bring their A game to Thanksgiving and we got this barebones bumper. Their Disney Vault Thanksgiving bumper is not much better either.


I don’t even know what Nickelodeon was going for with this one but that was during the more experimental time Nick had so this is right up their alley and not even that weird when compared to others they did. Their stick promo on the other hand is all we could’ve asked for and it delivered, there was basically nothing wrong that popsicle could do but it really was Nick JR who went all out with their best thanksgiving promo with a short animated segment

Finally we have an unused thanksgiving bumper from TechTV which I’ll just leave here because unused stuff and TechTV are both awesome. 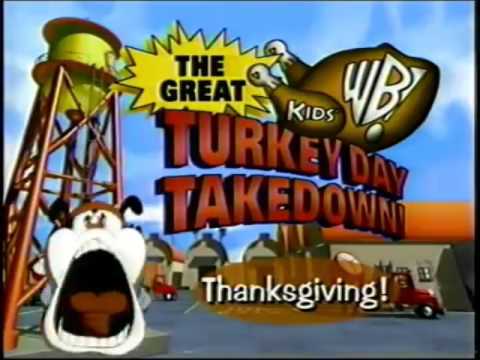