Filter Title of Record feels like an autumn album

Let’s take a look at Filter’s second album Title of record and check out what this industrial band had to offer in 1999 and an album that I randomly bought without knowing if it’d be good or not just knowing that I liked some Filter songs at a used CD store and went on being my favorite record for November during my last year of High School. Spoiler alert, this album will make me cry and want to eat pumpkin pie. A little more ear friendly than Filter’s other stuff. 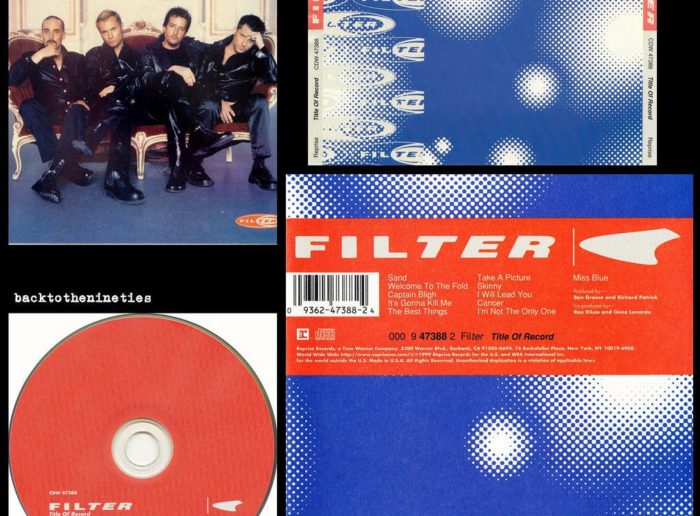 Sand is just an intro that before this I thought it was just part of the next song so I guess it does a good job but now Welcome to the Fold feels a little bit weird without it. This song is so secret that Rhino records has the music video unlisted but here you can check it out in all its glory the official video of Welcome to the fold. A weird song to have as a single but I ain’t complaining and a long song that was edited for the radio version and music video which sucks. A guy is driving in the desert when he see’s a water cube mirage in full 90s budget CG effects which adds to it which is cool but the band playing randomly in a small squared white room with shirtless fans is no fun and neither when the other camping vans arrive. The big reveal is that they’re playing inside the cube and maybe a seeking missle goes to destroy it as people are getting in? I dunno just go with it, I mean Richard Patrick almost has Ares’ beard from Xena Warrior Princess.


We continue with Captain Bligh that is upbeat and a good change of pace which is fantastic since I am also a grieving man like in the song. It’s Gonna Kill Me is about a toxic relationship and we all know how it’s like when she has a grip on you. The Best Things lyrics are from a motivational card but it’s catchy as hell and who can’t relate to having a green light but going nowhere, if only the god cars behind me weren’t honking. We now have Take A Picture in another unlisted song but we can’t complain since at least the quality is good unlike other records official uploads. A bit cooler as a plane crash lands on the ocean and they’re just floating and doing stuff in the sea, well that’s unique and while nothing to do with the song the titanic vibe makes up for it and at least this time his playing in a small IKEA like livingroom.

Skinny is not mince but and another feel good song but I guess that’s what this album was going for. I will lead you tries something similar but a few things save it before we get to Cancer which is a cool song to change things. I’m not the only one is here to depress us a little before Miss Blue ruins the mood a bit. We have a few other tracks in the international releases like the Spawn album, The Crow’s, X-files which I’ve written before about so I won’t here. Overall a great record to hit a wider audience which might not have worked out as well as he had hoped but worth a listen.