C.E.S. is the Consumer Electronic Show which shows us the technology that we may see very soon int he future or maybe never at all in the biggest electronic show and today we’ll take a look at CES 1999 20 years ago to see how much tech has changed as we get ready for CES 2019. We can see how much of the things shown are really relevant and Microsoft made a concept video also in 1999 where they really knocked it out of the park with how accurate it was especially when you compare it to the other video where people are excited just to have a laptop with internet from that same era. Taking place in January 7-10 1999 not many people are interested in reading what is out there but for example CNN mentions how the presence of internet portal companies were a big part of it and network adapters, so far from the sexy gadgets we normally see covered now by mainstream news outlets. There’s also mentions of DVDs and SACD (Super-Audio CDs) and Digital TVs and audio in general being the future which not all those technologies made it out (sorry super audio ;()

A German show / special Neues spezial had a report on the Las vegas show is the best source of footage I can find from the rest of the show, it was definitely the 90s and everyone tried to be as futuristic as they could since we were about ot enter the year 2000, we see a lot of CG being used in presentations and random gadgets that I’m sure are super innovative but look like huge brick sized Game Boys since PDA palm pilots were still the coolest thing you could fit in your pocket for businesses. Sadly I can’t speak German and I’m going mostly with the live translated subtitles. Smartwatches are still a niche that most people don’t like very much but they were already trying to keep watches relevant even 20 years ago. Photo and video cameras were finally becoming a big thing and getting better which was impressive at the time and very basic connectivity like the ability to print your pictures was important since most people still like physical things back then. It’s neat to see HDTVs and Widescreen sets when they were crazy expensive as much as an 8k TV is now that will surely be not only 20 times cheaper but better in just a few years. Here is when digital recorders were seen as the replacement for VHS recordings which while they became true it never quite reached that level. We still see a video game presence in the show despite E3 being an established thing by now but Nintendo is still seen there since it’s still a trade show where companies go to make deals.

The internet was still relatively new in 1999 but by then Microsoft was already in full swing with it after missing the boat a few years prior, at CES 1999 they had a concept video for “Meet the Family” concept video that showed their .Net strategy and it’s quite fascinating that you can see many aspects that exist today as normal things but back then they were new concepts, in fact I’m sure most just saw this as a tech demo with no chance of knowing if it was just fake sci-fi promoted as an actual product or if there was a chance of this happening. They are basically using a smart phone with NFC technology, a wikipedia like encyclopedia with live updates, Smart TVs and digital picture frames. We see Skype like video being used, one click online shopping Amazons style and even Echo / personal assistants being used getting reminders and asking it for stuff. I mean Apple gets a lot of credit for the iphone and they deserve it but Microsoft wasn’t that far off and had many of these ideas before with Pocket PC and Windows Mobile, their tablet initiatives and you can also see Microsoft’s interest in getting into the Gaming Industry here before Geames for Windows or Xbox became a bigger part of Microsoft. It’s just crazy how accurate this video is to life now and it was made 20 years ago and it deserves to be seen, Microsoft gets at on of slack when they’ve also been innovators and helped the industry. I like the Fatboy Slim namedrop to be hip, well done Microsoft. 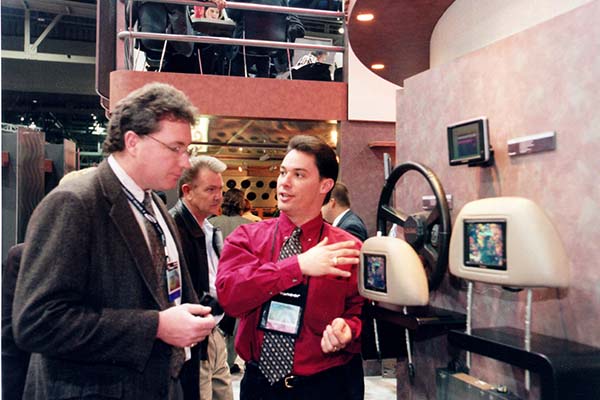