The best Captain Planet Cosplay for the top list

Everyday is Earth Day and Captain Planet needs more love, so today we’ll take a look at some of the best Captain Planet & the Planeteers Cosplay around. Granted it there isn’t much out there that is truly great but despite not being a popular costume and having a lot of low effort costumes, I was indeed able to find a few for today’s list that are truly great after going through all that trash cosplay.

Now some cosplays like say MaryMakingIt’s might seem sexy and appealing because it’s cute and a fun little gif will make it cuter. But It’s not an accurate Captain Planet cosplay, now I’m not against a new take or crossplay in this list as you will see but lack of blue is just a big enough short cut that means why bother to me.

I did mention I wouldn’t go into bad Cosplay but I do think it’s worth mentioning the official costume of Captain Planet. And yet they have no shame, they parade it around Earth Day parades and official photos with Captain Planet Foundation representatives, creators, hell even Ted Turner himself is glad to take pictures with him, I think only Don Cheadle would be a worse alternative. 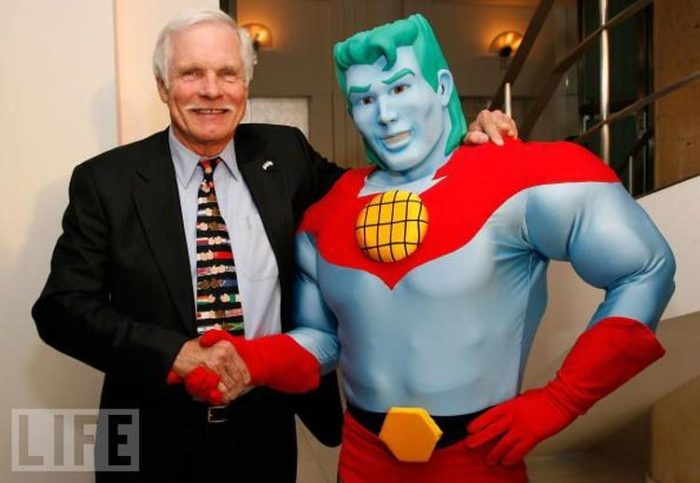 The Captain Planet Foundation which still exists to this day and any profits from the franchise were given to this non-profit to help with different eco-friendly projects actually has an official Captain Planet suit, and it’s been using the same one pretty much since the 90s and it’s beyond awful. I’m sure it’s had a few slight redesigns over the decades but it’s still frightening and I think even when it debuted it was low tier. 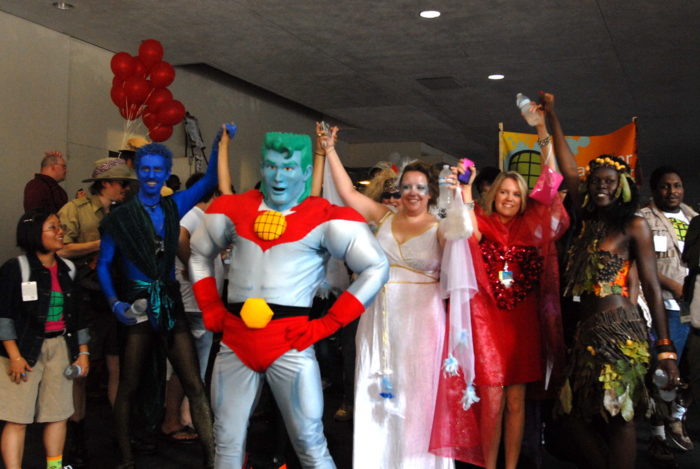 Now let’s take a look at some post apocalyptic Captain Planet Cosplay, counting that the world hasn’t gone greener idiots are still opposing being eco friendly for dumb political reasons. Not a fan of making some franchises into gritty ones but in this case it’s totally awesome, I love the detail they put into the costumes for this cosplay. 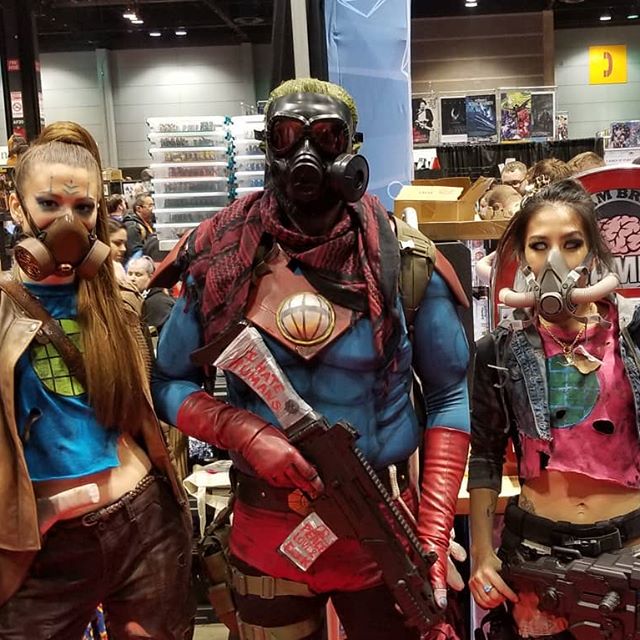 Bonus points for having decent Planeteer cosplay to go along counting how there really aren’t many great Planeteer cosplays out there and you’d think those would be easier to do. big props to this one. Almost makes me think if the Captain Planet movie Dark Planet would’ve featured a devastated earth like this one. 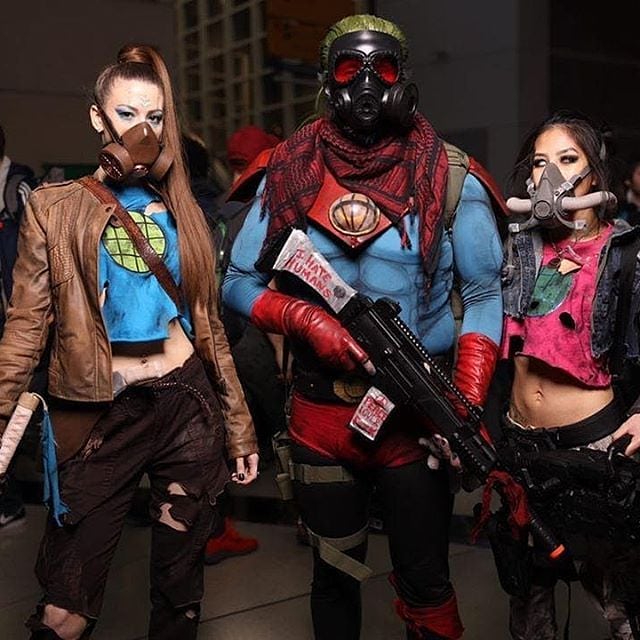 Here we have Ali Crozier doing some crossplay of Captain Planet and it really does work for the style of the character for it to be full body paint. I also think she makes an argument that a female Captain Planet would work. 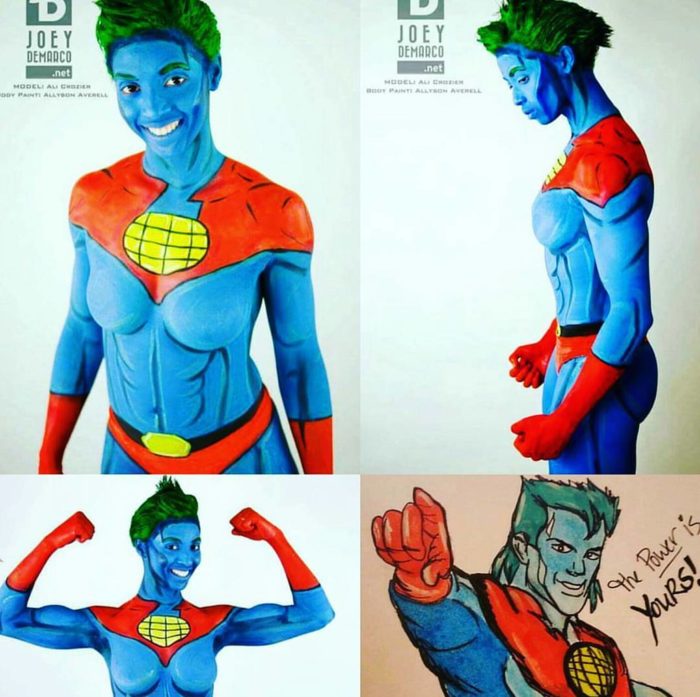 Next is what I kind of whanted to mention what I’d think a rebooted Captain Planet show would look like, a more hippie Captain Planet with long hair, at least he has muscle mass and it’s only missing that I guess Caps was actually crystal looking but a good cosplay. 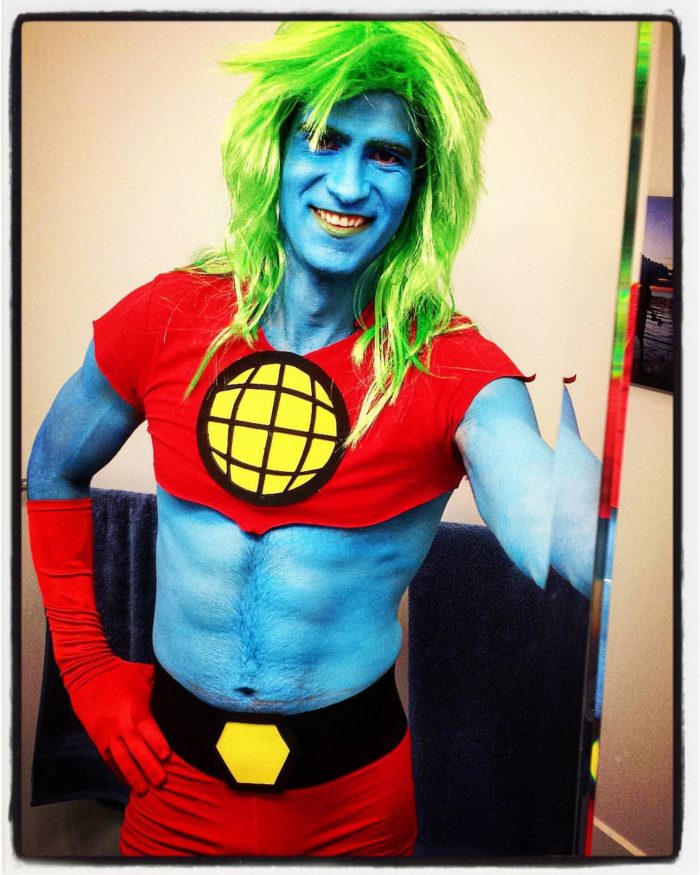 And here we have a more traditional Captain Planet Cosplay, what I like about this one is I think it’s the most accurate to the original show including the plastic looking hair and even paint that he used, also bonus points for including a Linka. Talking about Linka, here is the only decent stand lone cosplay and it’s too bad there aren’t better costumes around for planeteers since it’s easy to make more appealing versions with “sexy” or “apocalyptic” future ones as seen before, imagination is the limit. 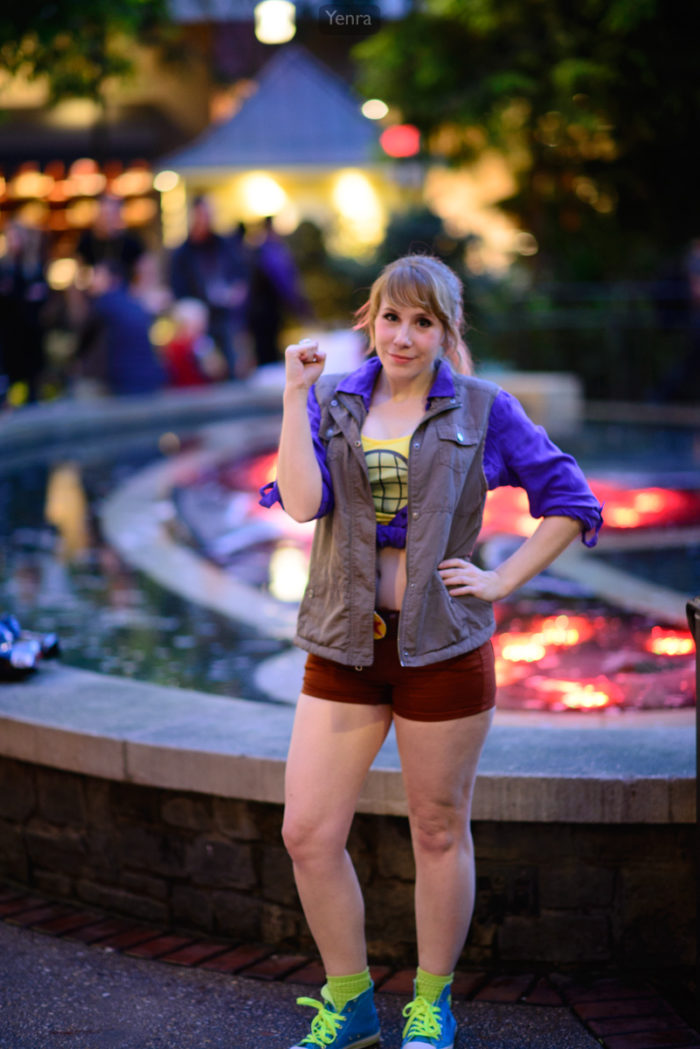 Here we have Joanna Bodnar who at least looks fit enough to actually be Captain Planet like the previous hippie one. And well I want to get to the best Captain Planet Cosplay so we won’t make it much longer and just a few honorary mentions. 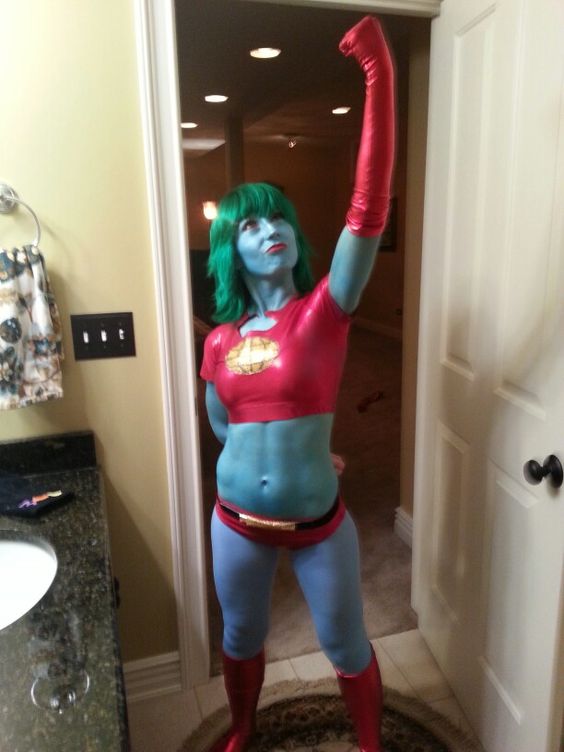 Brontology has been making a better Captain Planet cosplay over the years and it’s turned better so I thought I’d quickly mention it. 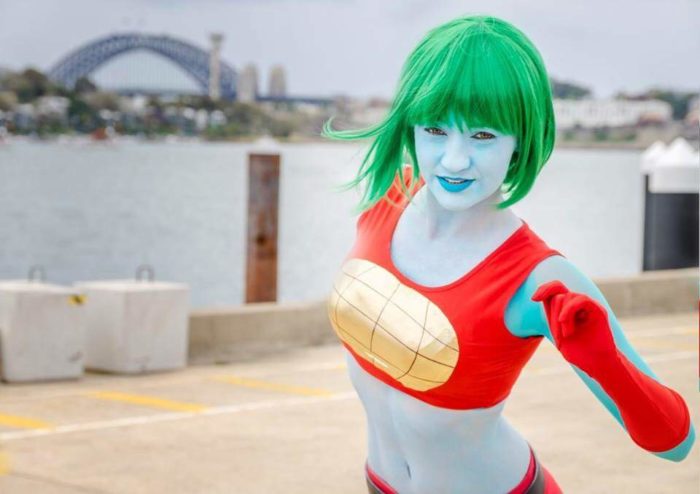 Sadly there aren’t as many Captain Pollution Cosplays around or any ecovillains so here we have 3 decent tries but all are lacking. The first one is missing the yellow paint which is a big no no. 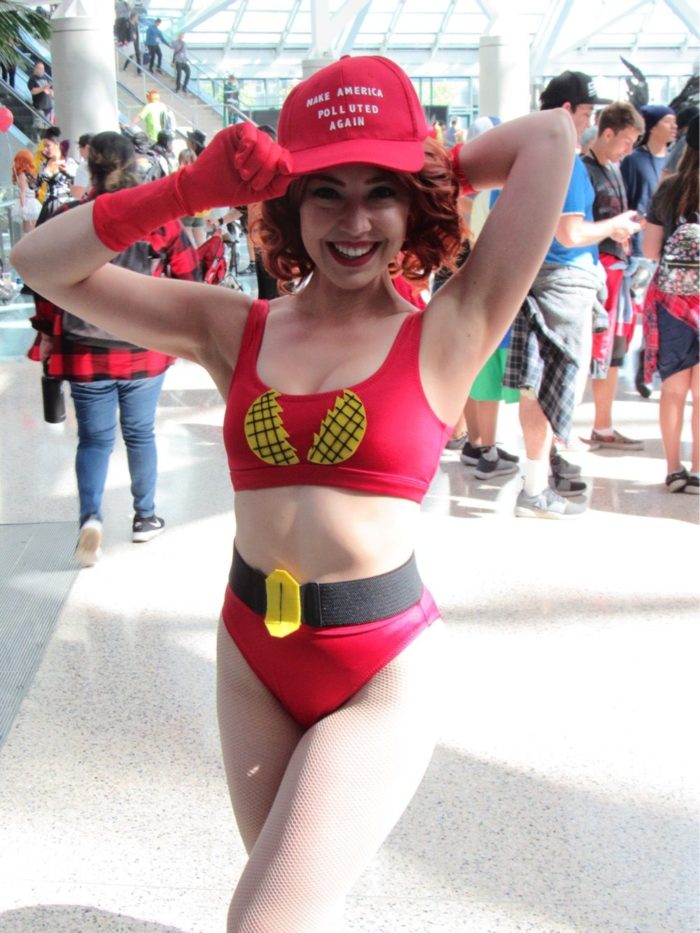 The second is hurt by the radical different approach for Captain Planet but all decent entries. 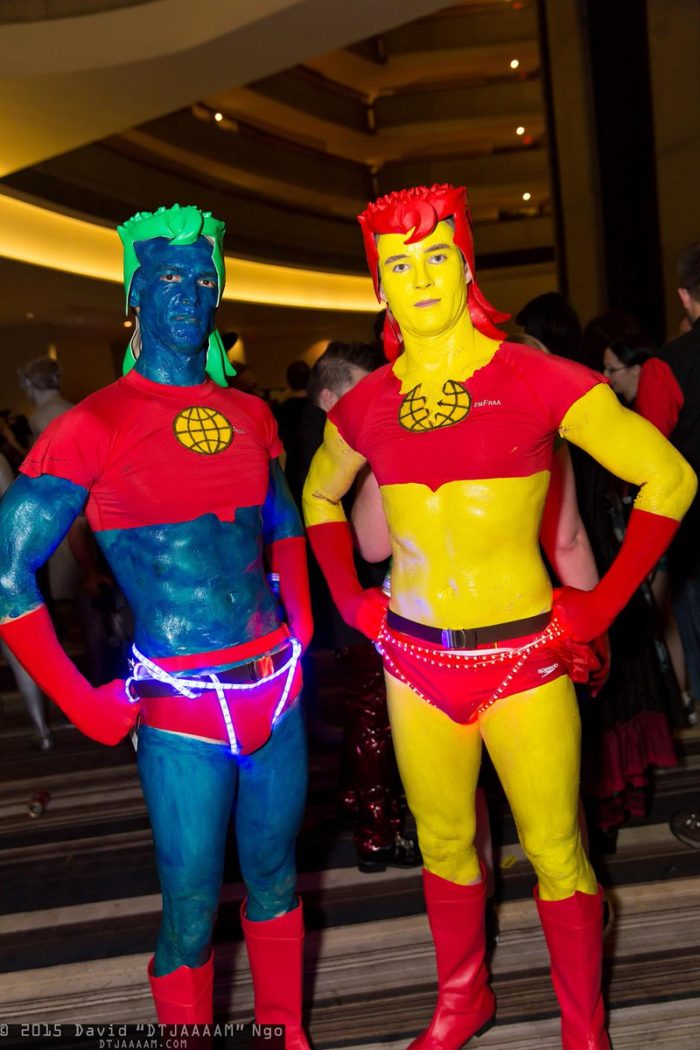 The last one is just bizarre, but something about it made me choose it over yet another female Captain Planet. 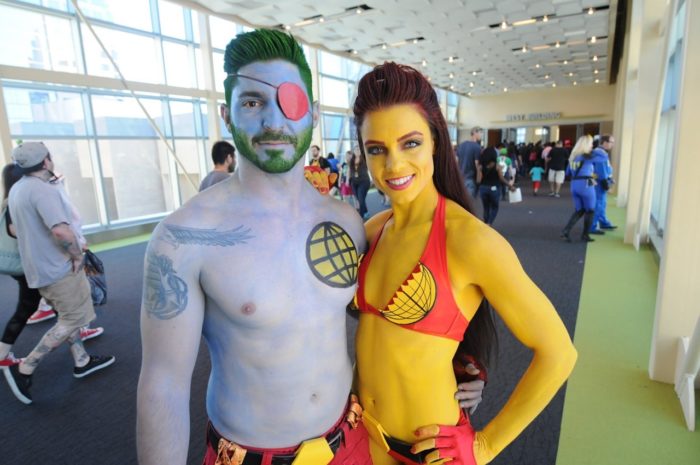 As mentioned I saved the best for last and that’s of Kay Pike who has a very specific style so I’d want to start with her in progress shots of how she got to the final version. 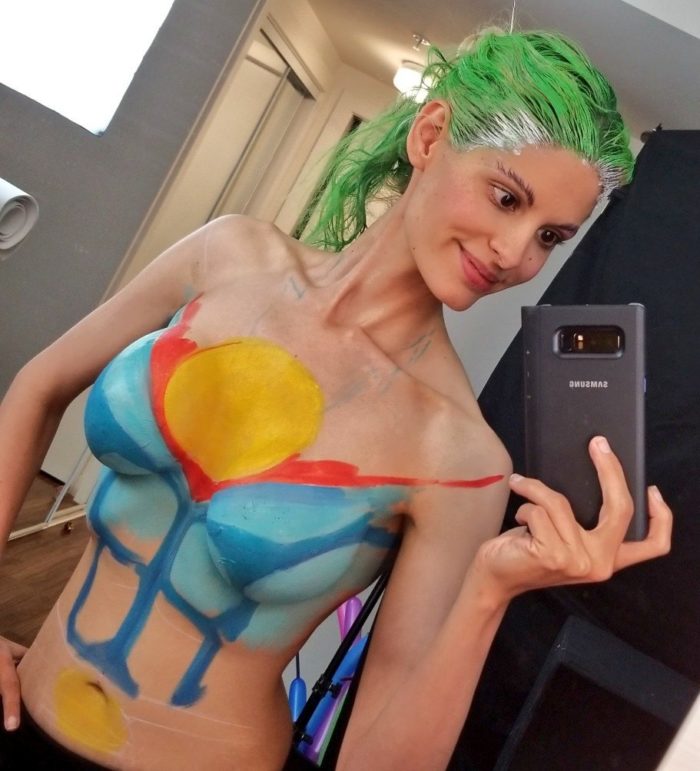 She also uses Body Paint for the whole outfit but unlike other examples above, she goes all out, you’ll be able to see more how it starts to change on the second pic. But it literally looks like a cartoon come to life. 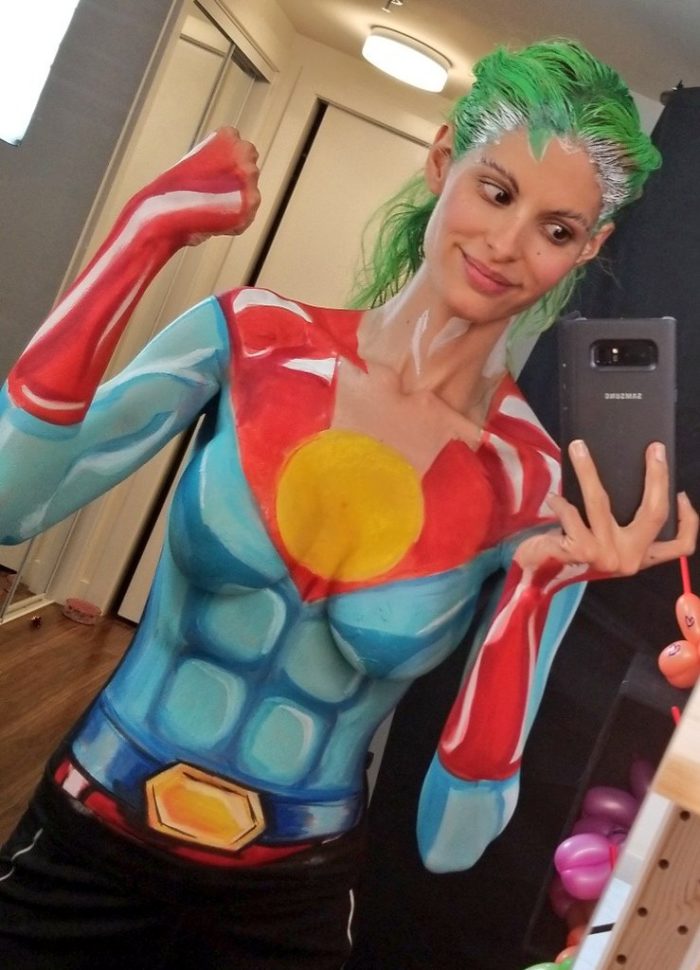 This is only one of her many cosplays that she does and they’re all excellent, but this is easily the best Captain Planet cosplay and I’m glad to see that Captain Planet got his due.

Check more geeky ecology articles here. On this Earth month just remember that the Power is yours.