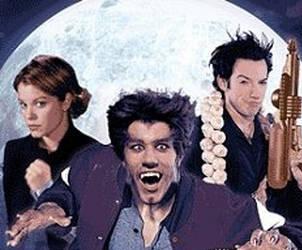 I was about to begin my teenage years when I found Big Wolf on Campus airing which I’m sure I’ll talk about later but the opening/intro of the show really got to me. The lyrics are cheesy but I can’t help but like the song, especially how it begins with “I used to own this town..”, while a bit embarrassing I guess it just hit at the right time of my life as I made my own transition. Even now it’s as good as I remember. The quality above isn’t great, you can find the episodes with a better quality intro but I didn’t want to link to full episodes. It’s col how the “Fox Family” logo really adds to the video in nostalgia points.

The second season got a new theme song which was a remix but it totally messed up the “feeling” of the actual song, sadly it’s also used for the third Season. as you can see below so you can judge on your own.