After Disney lost interest in Power Rangers it was forced to do another season with RPM because of contracts with ABC stations, but when they had to do another season also because of contracts they decided to just re-release a remastered of Mighty Morphin’ Power Rangers for the 2010 season. They added effects, a brand new more modern logo, new toyline and merchandise. Many fans were not expecting any new Power Rangers show so when MMPRv2 showed up even if it was something old rebranded it felt like the franchise at least had a little more to give with a little nostalgia of how it all started. It’s now thought of as this horrible thing but here is a little more of what this revisited re-version of MMPR really is. 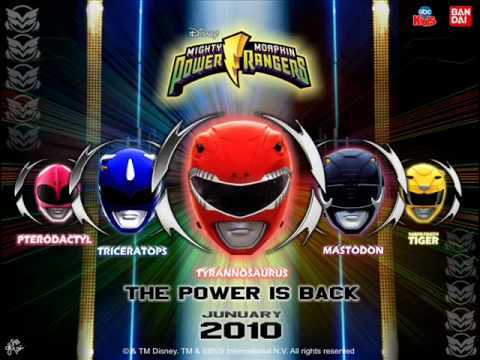 For our look back at the original Mighty Morphin Power Rangers you can read it here since we’ll focus mostly on the 2010 MMPR. As mentioned new effects were added and these could range in quite a few things from a small aura around characters, cool backgrounds, sound bubbles and effects when someone was hit, freeze frames that had comic book like graphics like 60s Batman but more modern. Other things included were stuff like Japanese text, colors, clouds with rain, hearts or anything to help put emphasis in certain scenes. This also means there are cut scenes, most because of standards and practices had changed and they couldn’t air certain things anymore in their martial arts fights. This meant some of the hits were put over the impacts to lessen the blows but other times just some dialog scenes were cut for no apparent reasons. Because some episodes were shorter because of it they had to make new scenes like profile shots of the different characters, random scenes from other episodes or teases of what was going to happen in the episode. The weirdest of the bunch were the dance offs that had the different characters dancing scenes shown and a winner declared. 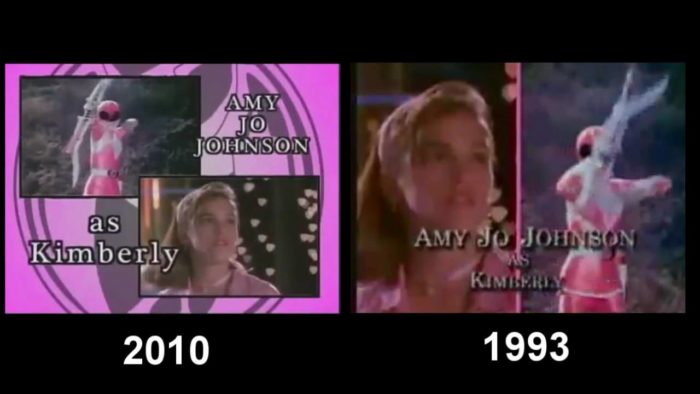 If anything was actually restored it’s hard to tell, I do think it looks a little bit better but some comparisons make it seem its almost the same, maybe just some colors are a bit different. This came before the HD era was as prominent so it didn’t get widescreen support or any upscaling either which is a shame. As far as the added effects I have mixed feelings, I think they’re cool, some are great others make the show worse or just distract, but they don’t actually make the show better, it’s just interesting to see something old like MMPR with something new even if it’s clearly the inferior version when compared to the original. My problem is they didn’t do it enough, they really should’ve gone crazy with the effects and added them in most of the show to make it feel a lot more different instead of just a few new ribbons here and there, make it a real remix of the original show. The fans were already going to hate it and it just looked old for 2010, it needed something to make it look newer and the logo changes were not enough. 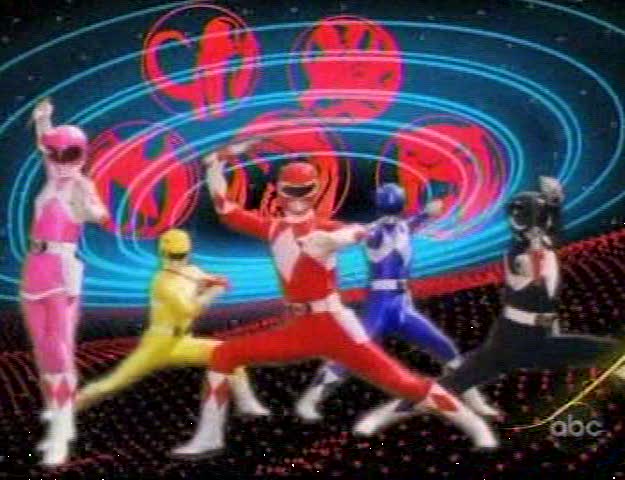 Contrary to some reports the show was not cancelled because of bad ratings, only 32 episodes were ever ordered and a small team which included Dan Evans edited it. He got hate on twitter and he would troll the fandom in response which didn’t so I can’t say either one handled things right there. While MMPRv2 was airing it was eventually announced Saban had bought back the franchise from Disney and we’d get a new season with Power Rangers Samurai most people stopped caring. As I mentioned, if they had put more effects it would’ve been more memorable since it would’ve been different instead of just a slightly altered version that isn’t as good so there is no reason to really check it out and no interest in most people. I mean I’m not even asking for them to re-invent it too much like the original promo almost teased that Rita went back in time to change it, now that would’ve been awesome but would’ve required much more work.

They could’ve also gone the Dragon Ball Kai route of cutting out the filler in DBZ, there was no guarantee there’d bef another season of MMPR reversion so why not condense the 60 season into only 32 episodes and really choose the best of Mighty Morphin. I mean it just ends in a random MOTD episode, in any case they could’ve taken the original 40 episodes of MMPR S1 which was the original episode order and the reason it’s sort of an ending with Rita defeated, it wasn’t until the success of the early episodes that they added 20 more episodes, they could’ve only cut 8 episodes and then have an awesome 32 episode MMPR with an actual ending. Stuff like Bulk and Skull’s greatest hits had potential, cut some episodes up, maybe join two episodes into one, experiment and do something to make it memorable for better or worse.

Any of these ideas would’ve been better and not cost much more money than what they spent and would’ve had the potential of actually having a chance of being successful or remembered. Not to mention it would’ve made making a season 2 more interesting, instead of adapting a hybrid season of MMPRs2 and MMPRs3 would’ve cool and gotten excitement. Instead we got this weird season 18 of Power Rangers as it’s shown on Netflix that people just ignore since it has a bad reputation and seems like it’s just the old show with a few after effects added. In the end the show really isn’t that bad, it’s just pointless, some effect are kinda cool but the cut content, or distracting additions make it an inferior version since they didn’t go all crazy with them as they sometimes showed was possible like in the final vignette in that last episode.