Nintendo never forgets a good idea, and even though it might seem like they gave up on the idea they continue to implement it in different ways until they get it right, just like at Nintendo’s history with Handheld and Console connectivity. And Virtual Reality is no exception, Nintendo has had the idea of VR since their early beginnings and have attempted VR or AR technology over their console generations. While we don’t have a dedicated Nintendo VR system, we will and so far here is what Nintendo has tried so far. 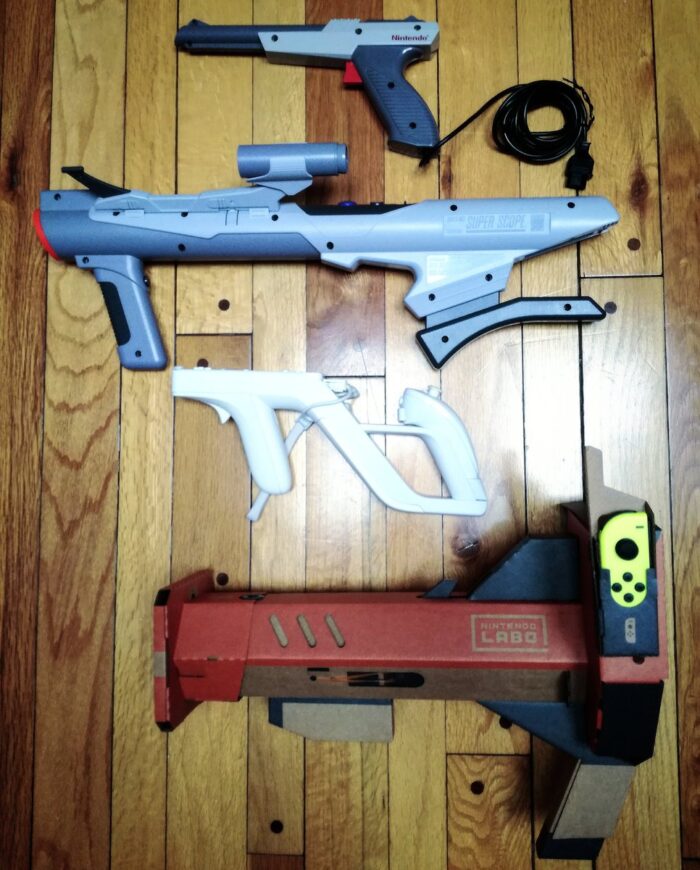 As mentioned Nintendo continues working on ideas even if they failed when they think it’s a good idea. Sometimes we’ve seen ideas take generations before they come out. If we get very vague then VR can go back really far and for the purpose of this research we will so we can see how exactly Nintendo has been into Virtual Reality since the very beginning. With that said we are beginning before the NES was even a thing with Beam Gun: Duck Hunt in 1976. It was a light gun where you could shoot dogs and of course inspired the Nintendo Entertainment System Zapper game Duck Hunt. 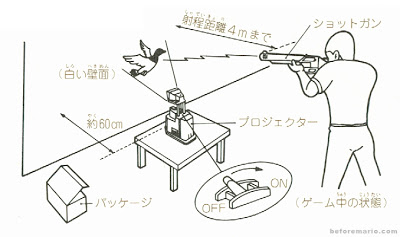 This was Nintendo’s first try at doing something a little more technical and electronic and of course even if it’s before their own video game console in a way like VR you could move around and of course we did get the NES Zapper and some light-gun games with the arrival of Nintendo’s first console the Famicom. Now you can hardly call that VR but the element of a game being more than something on your screen but a game you interact with. Remember this was Nintendo of America’s strategy to brand the NES as more than just a game console but an Entertainment System 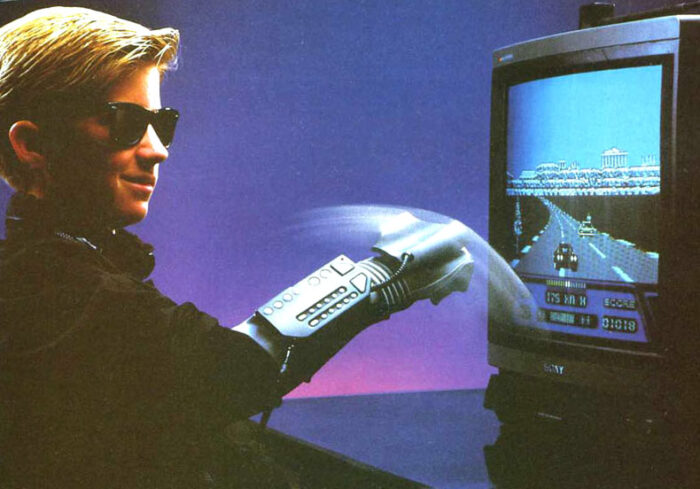 We saw the same with the Power Pad which started as the Family Trainer or Family Fun Fitness that was developed by Bandai but Nintendo acquired the rights, this is essentially a DDR Dance pad back in the 80s and it was a little less responsive but it worked by having you move your body with specific timing and coordination to be able to play sports games and you would run or the like and see your character on screen run as well. You could definitely point this out as being an evolution of playing a game in real life without a controller. 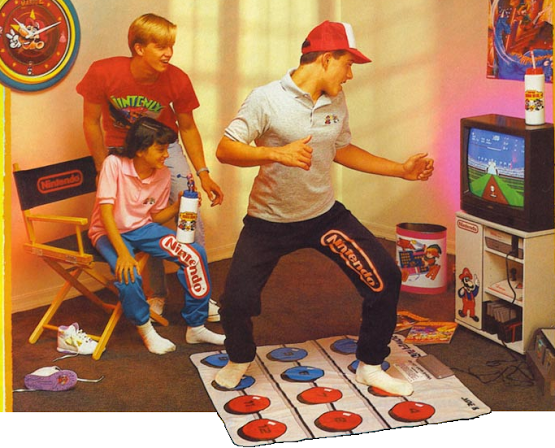 Let’s move on to the Power Glove that while Nintendo didn’t actually designed it, it was AGE and mattel released it, it was still an officially licensed product and plenty of interest from Nintendo. It wasn’t just any third party accessory since it got plenty of promotion from Nintendo including its appearance in the Wizard and it having its own Gaming Series on the NES. It used actual VR technology of the VPL Dataglove and it could track movement very well, in fact many modders and hackers would use Power Gloves to play aroudn with VR technology in the 90s and even 2000’s, there were just many compromises for it to work on the NES. 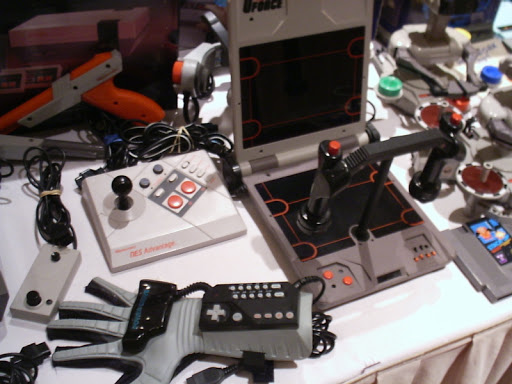 We have cool stuff that could go in here including the Konami LaserScope which is a headset like controller with voice controls, light gun and eye piece. We also have others such as the U-Force, Hot Seat or Roll ‘N Rocker which tried to do motion controls for the NES had none of these had any involvement from Nintendo so they don’t count. Now for something official, it only came out in Japan but they got the Famicom 3D System which used active shutter glasses to get 3D, it was not very successful but it was Nintendo’s first try to get 3D which is an essential part of VR to actually see in 3D. 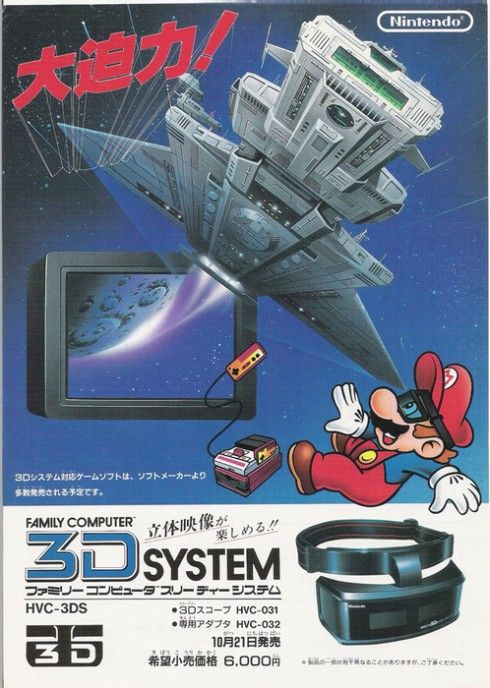 We get to move on to the Super NES but the SNES didn’t really have much besides the Super Scope which was an upgraded Zapper with better technology if you want to consider it. In the meantime we did get some more interest for Nintendo to bank on the early popularity of Virtual Reality in the early 90s with Gunpei Yokoi’s Virtual Boy which you can read much more about it in this Virtual Boy Tribute. It wasn’t very much VR but it did give use stereoscopic 3D and a headset you used so it was another step forward towards VR through the 3D technology that Nintendo had already tried and would continue to strive for. 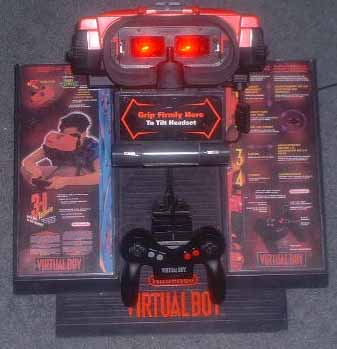 The Gameboy oddly enough has the Game Boy Camera which allowed you to take pictures and even play games with them, it’s a little more Augmented Reality than VR but it’s something. Especially since at one point you were supposed to be able to transfer your face to a character with the Nintendo 64 transfer pack so a way to get into the game. And this moves us to the Nintendo 64 which gave us 3D graphics and a joystick which even today’s VR headsets have controllers with joysticks. 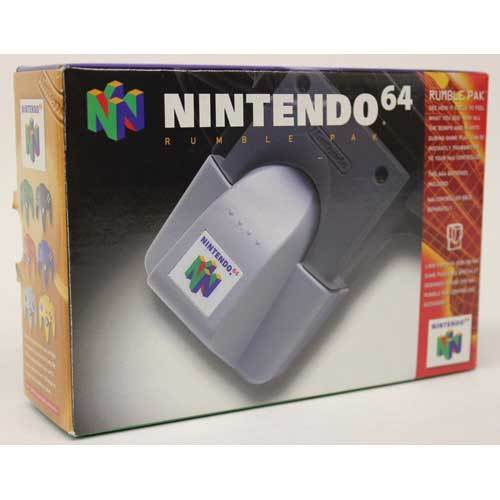 But it innovated with the rumble pack which gave you feedback by having the controller shake something that made gaming more immersive, so the N64 introduced an evolution of gaming sure but also some industry standards for not only gaming but VR. The N64 did get a power glove of sorts with the Reality Quest controller but that was not designed by Nintendo. Nintendo has always played with the idea of implementing stuff beyond games, from R.O.B. to e-reader cards, so they’re always finding new ways to get you immersed in the games and you can find these examples even if Nintendo wasn’t working specifically on VR as with the N64. 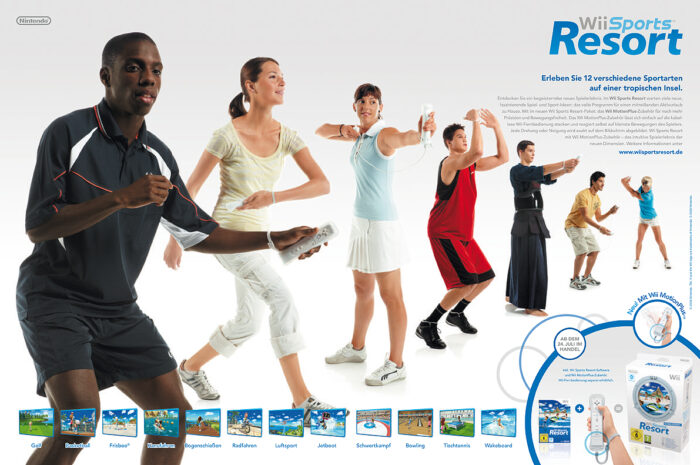 When we move on to the Gamecube besides improving upon the things the N64 revolutionized we didn’t get much unless you consider the Mario DDR Pad which is basically an evolution of the Power Pad. Nintendo did start developing a screen to be used portably with the Gamecube that would allow Stereoscopic 3D, this same tech was also planned for the Gameboy Advance but both were never released. We also got a prototype controller for motion controls which were never released however they were reworked into Nintendo’s new console the Wii. So while not much was release during this generation you could see that Nintendo was still working on tech that would eventually be released. 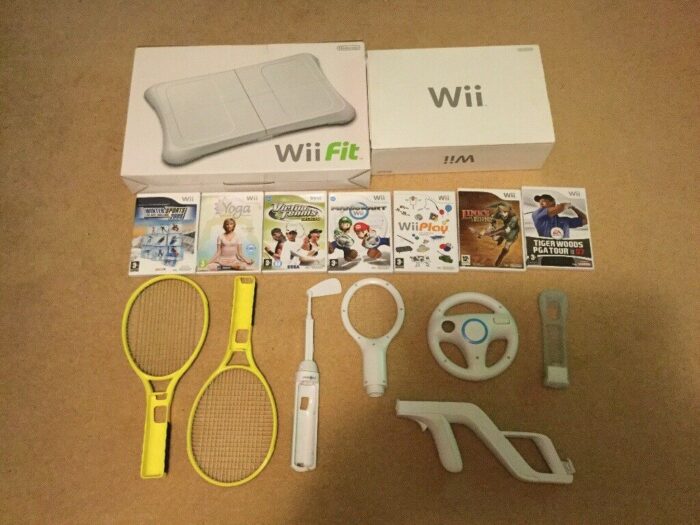 The Wii used that technology for the Wii remote for its motion controls and it was a huge success since it allowed you to feel like you were in the game taking part of it, this is VR very much in a much more primitive form. The motion controller was eventually upgraded with the motion plus accessory and later controllers included it for even better detection. We got tons of accessories both official like the Wii Wheel crossbow and unofficial ones like all the sports and cooking attachments . We also saw the release of the balance board which tracks the user’s center of balance and was used in various games on both the Wii and the Wii U. 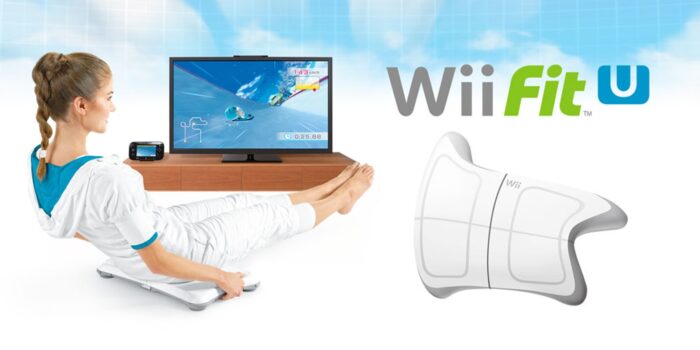 The Wii U mostly improved on the tech of the Wii and the tablet had a gyroscope which Nintendo played around the idea having 360 degree videos with guided tours of different cities around the world with Wii U Panorama View and Wii Street U many years before VR 360 videos became a thing on youtube with google cardboard and those early first gen VR devices. 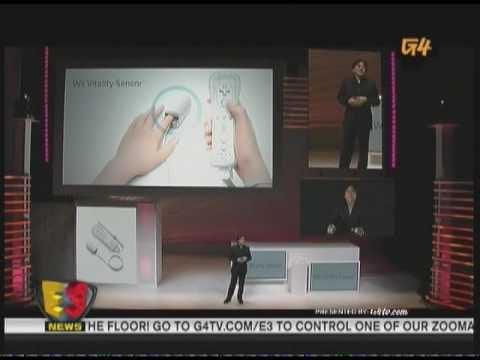 A little before this time as well was the Vitality Sensor which was meant to be able to tell if their games or apps could relax the player, telling them their heartbeat and about their body among other uses. It was part of their QOL initiative they never found a way to market it and it was cancelled, for now at least since we have seen Nintendo never throws out any R&D completely. 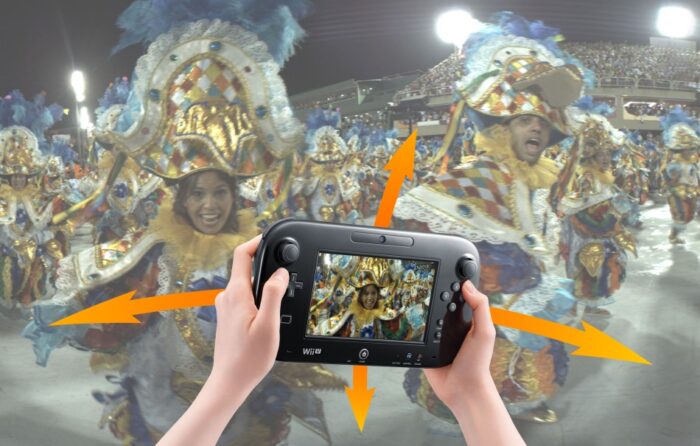 The Nintendo DS gave us some AR games from Nintendo with the release of the DSi and that was improved upon with the Nintendo 3DS which the AR was actually heavily marketed and each handheld came with AR cards. This is without mentioning that it finally implemented the stereoscopic 3D tech Nintendo had worked on for a few years now which added depth to games and Nintendo was able to make software that took advantage of being able to tell how far some platforms were for example. 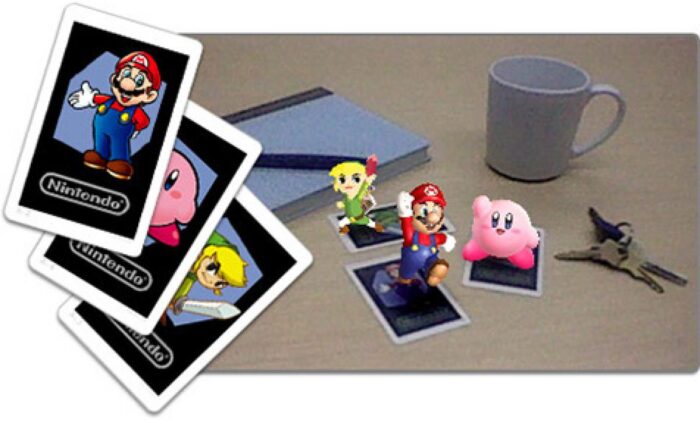 We now get to the Nintendo Switch which had much better haptic feedback with their use of HD Rumble and of course improved motion controls. One of the controllers included an IR camera to which was implemented in a few games and on Nintendo Labo. It was Nintendo Labo that in 2019 released Toycon 04 which was their VR Kit using carboard. You have cardboard VR Goggles that use the Switch tablet and it can be attached to different cardboard accessories like a blaster, a camera, a pinwheel, an elephant among others. It wasn’t the most technically impressive VR by the time it released but it was fun and generally simple but enjoyable experiences as Nintendo knows beset. 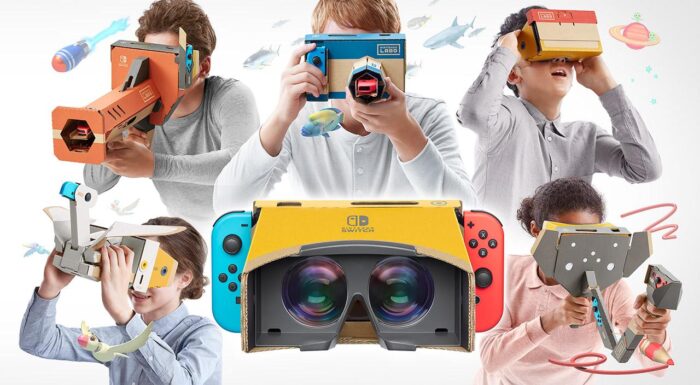 It didn’t stop there since some of Nintendo’s first party software got VR updates where you could play parts of the games or even new campaign modes and while they were small and simple they show that Nintendo is working with VR on games. AR is not being left behind either since Mario Kart Live Home Circuit gives us our first Augmented Reality Mario Kart using both your Nintendo Switch and a remote controlled kart to race in a mix of the real world and the digital world. 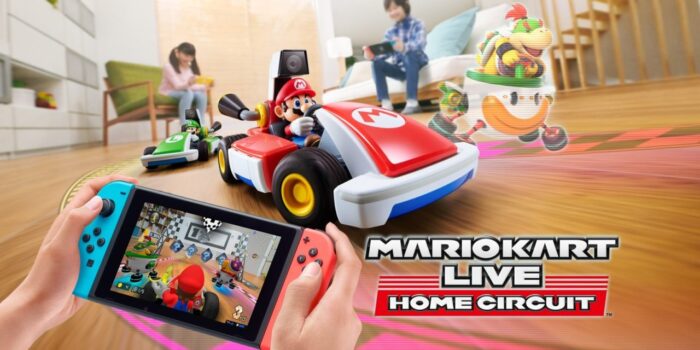 Some of the examples lean a little more into AR than VR and some only offer a bit of what VR is so it’s not necessary that Nintendo was working on VR for this long but in other ways you can track back how Nintendo has been playing or shown interest in different technologies related to modern VR. It’s not a question of if but when a Nintendo VR or AR system comes out and only then will it be clear how Nintendo has been working on getting it right for decades. As always Nintendo will wait for the technology to mature and lower in price before they go for their idea, and you can see this in this brief look at how many VR related techs evolved and improved over the years. 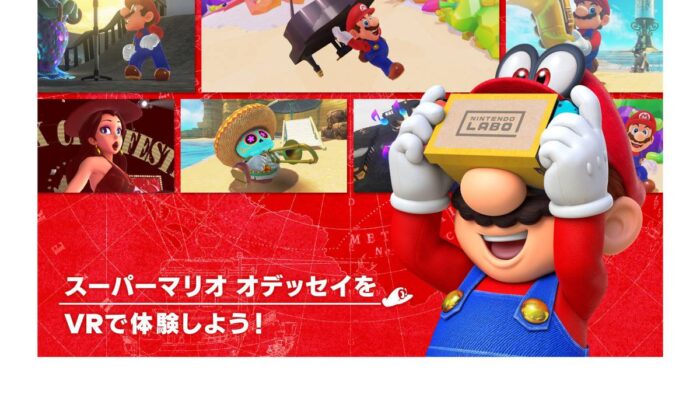 Mario Kart Arcade GP VR
Finally I’d like to mention the first real complete VR game from Nintendo released in 2017 for VR Zone arcades, it runs on Windows using the HTC Vive headset. It is controlled in first person perspective and you control the steering wheel and you must throw weapons with your hand. It was not available in many places and besides the very limited release it is also just a short demo where you can play some tracks and not a full blown game, but even if developed by Namco it’s still Nintendo’s first full VR experience. 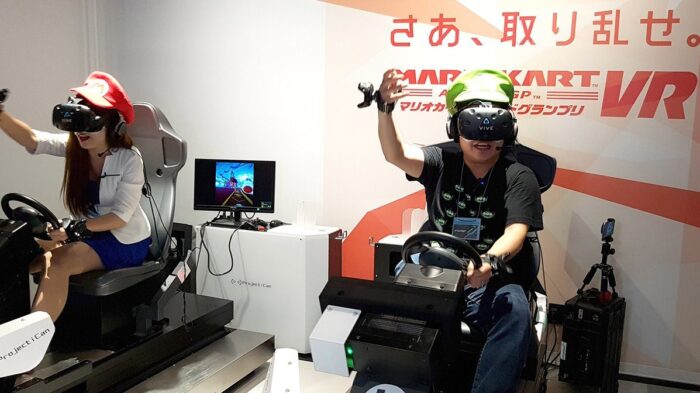 Sometimes the ideas revolutionized and sometimes they failed, but when they failed they were either a bit too early on the tech or it wasn’t quite right but they learned and kept implementing the ideas until they were able to get a successful product. This is what Nintendo does best and I fully expect Nintendo to eventually embrace VR fully as that Nintendo On fan video showed us. We will also get more AR related software in the future since it’s another aspect that Nintendo has focused heavily on over the years. For more raving Nintendo articles click here and for all your VR news make sure you check out WeaR VeaR.