The Goosebumps movies are for any fan kid or adult alike

Goosebumps was huge in the 90s and they tried doing a movie for many years but for many reasons they couldn’t get one and eventually the franchise died for many years. Goosebumps got a revival later in the late 2000’s while no longer at it’s height of popularity it was successful and we finally got a movie, well two movies. There are many opinions online but they are a love letter to Goosebumps fans and entertaining for kids offering nostalgia but not forgetting who the target audience is. Today we take a look at what makes the movies fun to watch and why they are worth a watch. 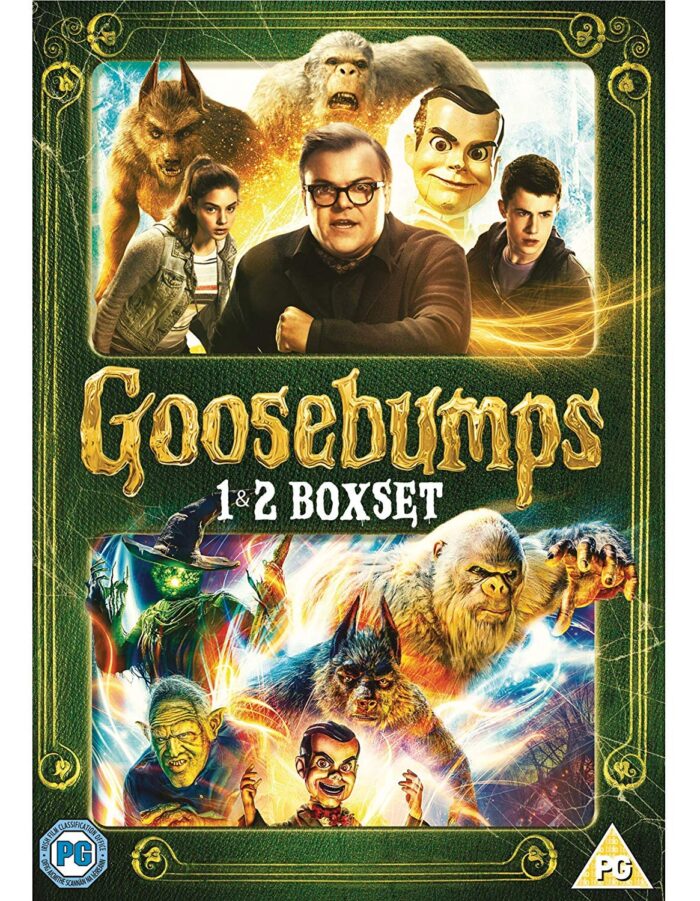 The story is not based on any one book which is good and instead we have a Jumanji type set up where the books come to life. This concept works for a variety of reasons including we get to see more of the goosebumps universe in one movie and R.L. Stine has always been associated with the franchise. Jack Black does a great job playing Stine and we have Hannah, Zack and Champ as main characters are fun to follow around in their adventure. 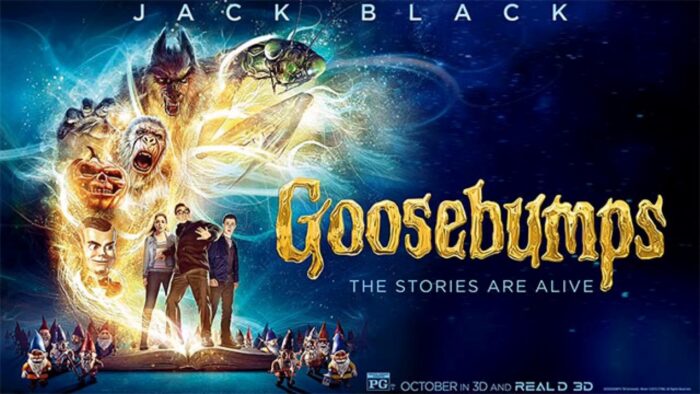 The movie is set up like a goosebumps in more ways than fans give it credit for, you have a suburban neighborhood and we get a bunch of dumb jump scares with lame revelations like how every chapter of the books had. “What is that shadow behind me”, “Oh it was just Hannah”. Some of the dialog especially the one Stine has feels like the way a character would talk. The Jumanji idea feels fresh since it really hasn’t been done since the original movie, and it works as a new story for the movie.

The comedy is not something the goosebumps books had but it’s actually funny and in a way necessary to move the plot along in a story that isn’t really scary; and no in general Goosebumps was never scary. We still have a mystery and a twist which is part of the books. It’s important to mention that the plot of the movie in a way is just a mix of 3 books that it draws plot points from. The Night if the living dummy III, The blob that ate everyone and The Ghost Next Door are in a way adapted since key points from those books are here.

As far as the monsters we see we get The abominable snowman of Pasadena which gives us a more action oriented section like Jumanji but it’s fun. It’s similar with the werewolf of fever swamp and both of these get way too much screen time and get more later on which could’ve been used for other Goosebumps creatures instead. We do get some Jurassic Park nods like mentioning they can’t see you when you don’t move and the supermarket scene took plenty of scenes from the Raptor kitchen scene.

I’m glad we get nods to different books and not only the classic ones but also 2000, Horrorland and spin-offs such as the Haunted Car and newer ones as well. The Gnomes make a return, so do the graveyard ghouls, the shocker Mantis, and the blob but they don’t have a lot of screen time just a couple of scenes. It’s a shame other creatures couldn’t be shown and given a bit more time, most are just relegated to cameos if you pause the video or a few second scenes attacking someone. 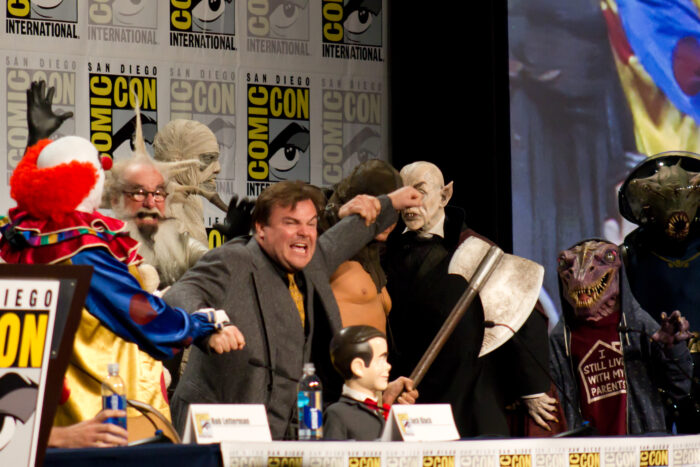 The SDCC panels gave hope that they had a lot more going for the other monsters, I didn’t want to have great villains like the haunted mask and monster blood wasted quickly but counting they never got any scenes is a désappointement. This is especially true since many of them have really cool designs and they were just not used much at all. The movie loses a lot of suspense and and perhaps using some of these characters could’ve changed things up. 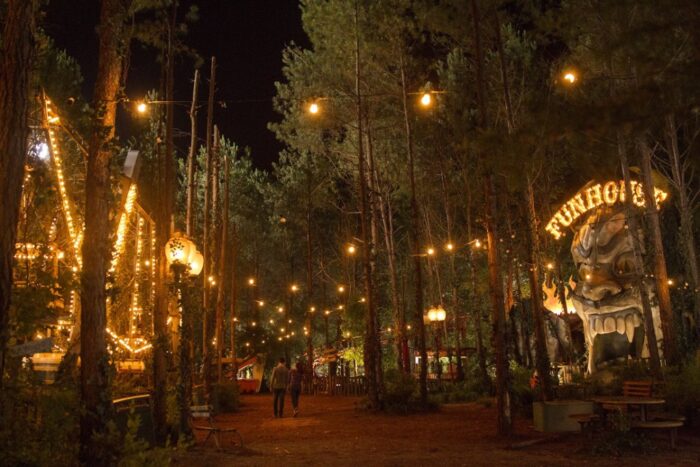 The abandoned fair setting in the end was cool and a nice final act that ends a bit quickly but that’s not where the twist happens. The twist is shot and simple but it works with the tone of the movie. Slappy was a good villain to choose to move the story forward, I never saw him as the face of the franchise but whatevs. The ending vignette with the cover artwork of the original books by Tim Jacobus gives the finishing touch to feel like it was a great tribute to the 90s franchise.

The first goosebumps movie was a big success so a sequel was planned but it went through a troubled development, starting with an idea involving Horrorland, then going for a more basic Slappy’s Revenge. It seemed they opted for a rehash of the original based on the trailer but it’s not quite that as we’ll see below and in a way feels exactly what a Goosebumps movie would’ve been in the 90s at the height of Goosebumps mania. The movie was rushed and we didn’t get cool tie-ins or marketing like the original did either but let’s take a look at what worked and didn’t.

In many ways this movie feels cheaper than the previous one, less marketing, hype and merchandise to go along it. In a way it’s actually more faithful to what a Goosebumps book would be since this is basically just a Night of the Living dummy; Slappy story with some bells and whistles to be fitting of a movie instead of a kids book. It is no longer a Goosebumps free for all since it is only a Slappy movie with the theme of Halloween and that’s good since at least it tries something different than the original and as I mentioned I feel that if a Goosebumps movie had been made in the 1990s, we would’ve had some version of this. 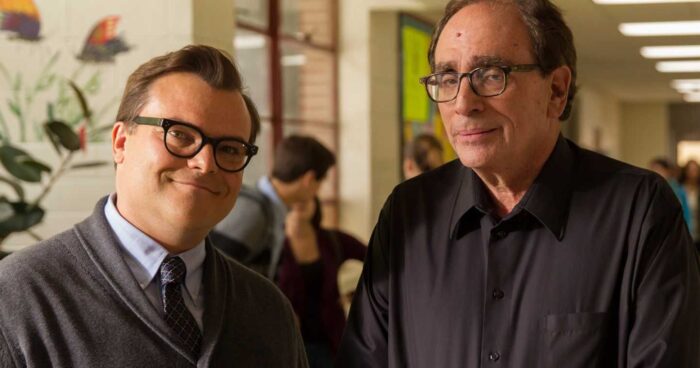 We get a Halloween theme for the movie and Goosebumps is one of those franchises where you can mix Halloween into the horror story and it works, so while disappointing that we dont get other Goosebumps monsters, it’s ok since it wasn’t a story about them and we get some iconic halloween figures done in a Goosebumps style. The reason is Slappy is just bringing anything he wants to life and since it’s the Halloween season that’s the reason all those creatures are brought to life. Including the Gummy bears which have the same role as the gnomes did in the first movie but it’s a cool idea and would totally fit the tone of a Goosebumps book. 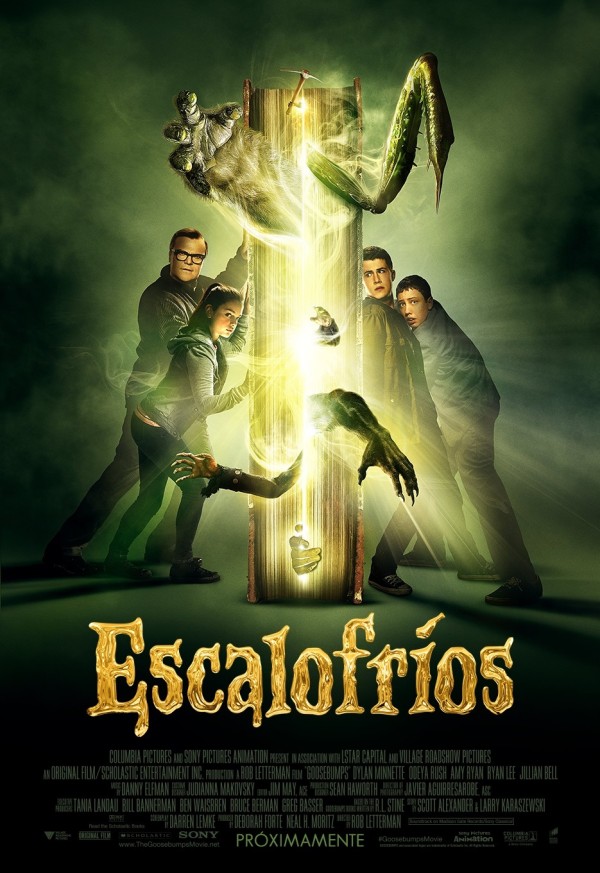 We do get the werewolf of fever swamp and the abominable snowman of Pasadena since they were masks in the Goosebumps section of the store but they weren’t meant to be their book versions. I guess they had the CG models laying around and it didn’t cost them extra and they threw them in for good measure despite already being featured heavily in the first movie. So while the trailers made it seem like a rehash of the first movie it’s a different movie, in fact it has a bit of a Ghostbusters vibe since they’re sucking monsters into books.

Jack Black as R.L. Stine was in another halloween themed movie that same year The House with a Clock in Its Walls but he still has a role in this movie albeit smaller and it’s to save the day in the end. Even though he is only there for a bit his charisma is felt and it’s a shame he wasn’t in more scenes, since he is a great R.L. Stine. I liked Walter the ogre who was sort of the only monster to get a role besides Slappy. There’s still humor in the movie but less of it which you would think it’d be a good thing since the books didn’t have much humor but the humor helped the tone of the movie since none of the stuff is ever scary in Goosebumps books. It very much feels like a Give your self Goosebumps, choose your own adventure book, now that would’ve been a cool way to do the movie but oh well.

Wait what? A Goosebumps 3? The second Goosebumps movie didn’t do well enough or memorable that a third movie was never made. The cliffhanger in the end of the movie opened up a bit more to a sequel than the original twist. I wanted the second movie be about the characters going inside different books to change the dynamic and being able to show more of different Goosebumps worlds. In a way that made sense as a sequel to the original movie but we got something different that was a little smaller scale but the ending to the second one basically set this up with some new kids trying to find RL Stine. 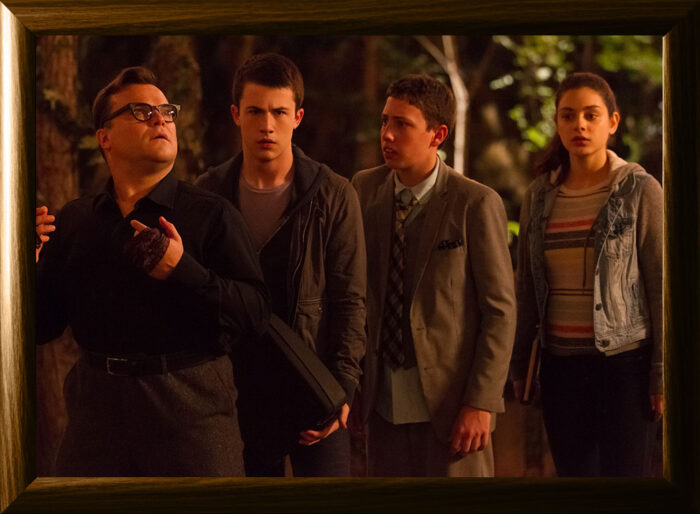 But alas it’s the end of this continuity outside of the VR games we got and we’ll never see this concept explored again for better or worse. We are getting a new Goosebumps TV show so that may have potential but let’s see where things go from here. I doubt the tv show would go on this direction following the movie continuity but who knows what we could expect. 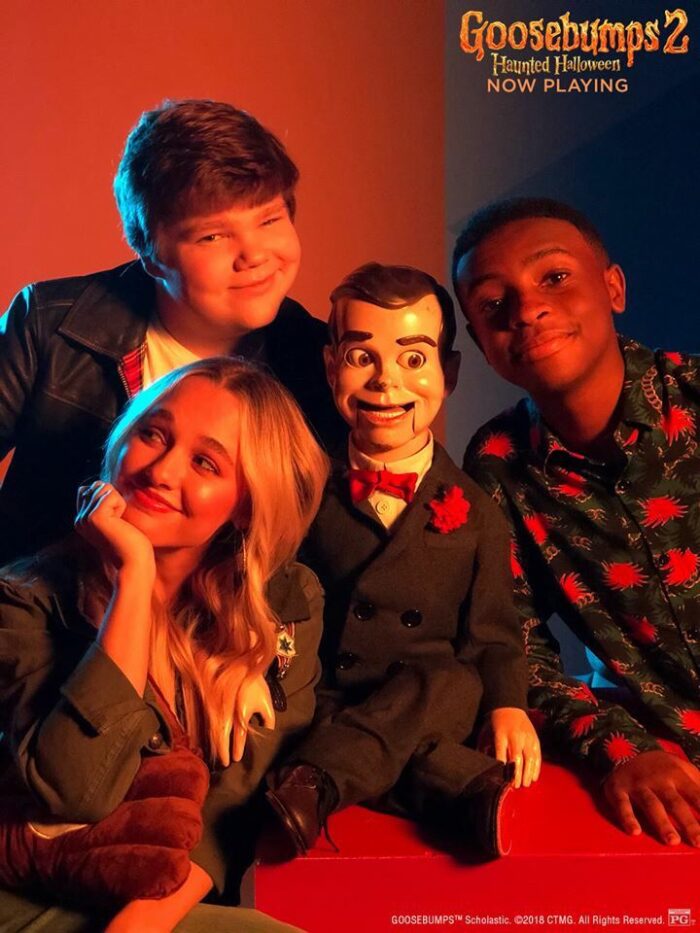 RL Stine doesn’t like the movies much stating they were too comedic and same with fans but the goosebumps books were never genuinely scary like Are you Afraid of the Dark?, perhaps a few of them were a bit more scary and some were thrilling but it was always a kids franchise and with a fun Twilight Zone twist in the end. The movies do a good job at that and it was a nice way to pay tribute to the franchise instead of adapting only one story and hell we even got a nice goosebumps music video out of it. We’re getting a new show from some of the same people who made these films so let’s see what they bring to the table.