Nintendo might be license happy now granting many of their properties to different companies to develop shows, toys and movies but before they were so liberal with their IP’s after the failure of the Wii U they had actually been extremely strict with them after the early 90’s. 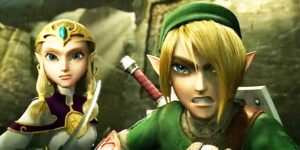 We’ve recently read rumors of Nintendo looking to license The Legend of Zelda for a movie but this isn’t the first time studios have been interested. Back in 2007 there was a failed pitch by Imagi, the studio that brought us the fourth Ninja Turtles movie. Unlike the Gatchaman CG movie which never got made this one never actually even began official production but we can take a look at the video that was used to pitch the movie.


The characters look like Imagi’s usual humans and I can already see many people hating it as they want that dark realistic live action movie but I actually think this is a lot closer in style to what Nintendo would like to see.

I do think it’s a little bit on the kid-safe side and getting close to the 80’s cartoon in mood but it would’ve been an interesting movie to see nonetheless even if not my number one pick for what I would’ve wanted as a film. If you want to see more you can also check out this render of the video in production before any details are put in it. Oddly enough the CG kind of reminds me of the CDi games 3D remakes.