Resident Evil became a huge success on the Playstation PS1, the franchise took a bit of a small break after Code Veronica came out on Dreamcast. It’s at this time when we got the Resident Evil movies with Alice and with it we got early 2000s nu-metal filled soundtracks, at least with the first movie. The first movie had a surprisingly good soundtrack, the other movies as well actually, and it definitely marks the era of when the movies came out, they feel very contemporary in that way. You wouldn’t think Resident Evil doesn’t fit the numetal genre but it works. We’ll be judging the soundtrack not only in quality but if it actually fits the movie and franchise.

It’s unique but we begin the firs track with the little girl the Red Queen telling us that we’ll all die down there. It was used a lot in marketing and actually in all of the Resident Evil movie sequels. Then we get to the single of the album: My Plague by Slipknot. This being a slight remix the New Abuse Mix. Unsure how much it differs from the original but it’s an alright catchy song, the music video is lazy just footage from a live show and random scenes from the movie and yet it works alright. It helps that the masks aid with the atmosphere even if Slipknot is not something I associate with Resident Evil. I guess the T-Virus is a plague though not sure the lyrics fit any zombie plague. 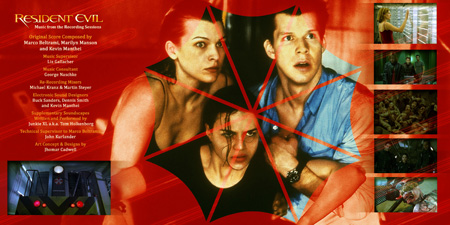 The Fight Song (Slipknot Remix) By Marilyn Manson, an ok remix to the superior original version but whatever I guess it can work with the zombie theme? Unsure. Something Told Me” by Coal Chamber is just a song from their Dark Days album.. no remix and just heavy psycsofrenic but not related to zombies. Name of the Game (Clean Name)” by The Crystal Method is a censored version of the original, I think it’s used and worked better in the movie, not relevant here much. nothing to do with zombies despite being good song. Everyone by Adema from a fantastic album. I guess you could say the lyrics are part of what Alice is going through at the end of the movie, weird choice? Invisible Wounds (The Suture Mix)” by Fear Factory gives us an original remix for the soundtrack and here the lyrics actually make sense in the movies context, finally! We continue with “Anything but This” by Static-X, I guess it works since they want anything but this… Halleluja by Rammstein which is a church song ? not really much to do with zombies but fantastic song, I guess because it sounds creepy? perhaps more for silent hill.. We’re pushing it but perhaps some of the characters regrets to say the lyrics for Dirt by Depeche Mode make sense in this movie? not the best song to be on this soundtrack though a bit slow compared to everything else pretty much. What Comes Around (Day of the Dead Mix)” by Ill Niño and with this remix of this song we’re also pushing it but I guess the lyrics can be what Alice thinks, yeah it’s a stretch but at least it sort of fits. Dig (Everything and Nothing Remix) by Mudvayne has absolutely nothing to do with the movie but man this remix feels so early 2000s that I allow it. 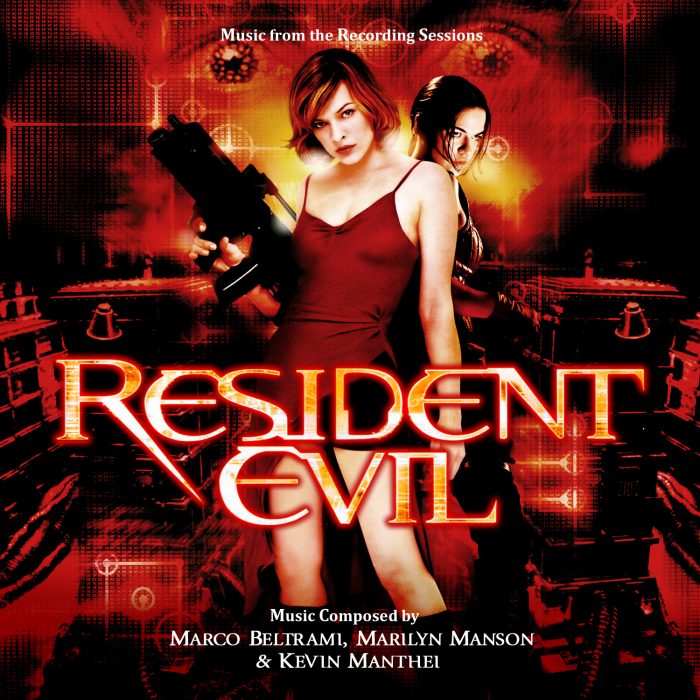 “Release Yo’ Self (The Prodigy Remix)” by Method Man? Damn another song really stretching it but you can sort of argue that it can be relevant. 800 (Manson remix)” by Saliva, for this one you really gotta stretch it so thin to justify Saliva being here but besides numetal erm not much. I’m thinking they thought that the spooky names of the remixes was enough to include them and called it a day.. “The Infinity” by Five Pointe O at least it’s easier to justify this song,

Finally we get “The Umbrella Corporation (Film dialogue)” which is an intro of what umbrella corporation is from the movie and one that is repeated in most of the sequels. I guess neat but a bit long but after his we get to the winner the BGM OST by marilyn manson:

All fantastic and should’ve been used in the sequels but I guess the other rovies did have their own take which were decent. Reunion is meh but the others classic good.

There is a hidden track at the end of the album, featuring a quick snippet of dialogue from the characters Chad Kaplan and Alice. I guess an easter egg that is mostly worthless. And now the next are perhaps out of scope but these are included in the movie not the cd so we’ll do a quick round for them:

“Existence” and “Torched”, by Frontline Assembly: vague could fit
“Fist Fuck” by Nine Inch Nails: I guess relevant don’t remember any of these in the movies
“Cyanide 2600” by Spineshank: meh a bit same as above
“Wall of Death” by Apollo 440: i’m guessing just backgrond music quickly like apollo no lyrics