The Rampage Game Realistic Movie We Got Is Good Kaiju Action

Rampage was a game with giant monster attacking cities and the concept seemed so basic and yet worked that I always wanted a movie based off of it because it’d be pure fun no matter how low budget or dumb it was. I waited for years being tricked by other movies called Rampage being announced and when one was finally announced I could hardly believe it. But how do George, Lizzie and Ralph do in their movie with Dwayne Johnson of all people? This video game adaptation is definitely different than what I would’ve imagined the arcade game could’ve done. 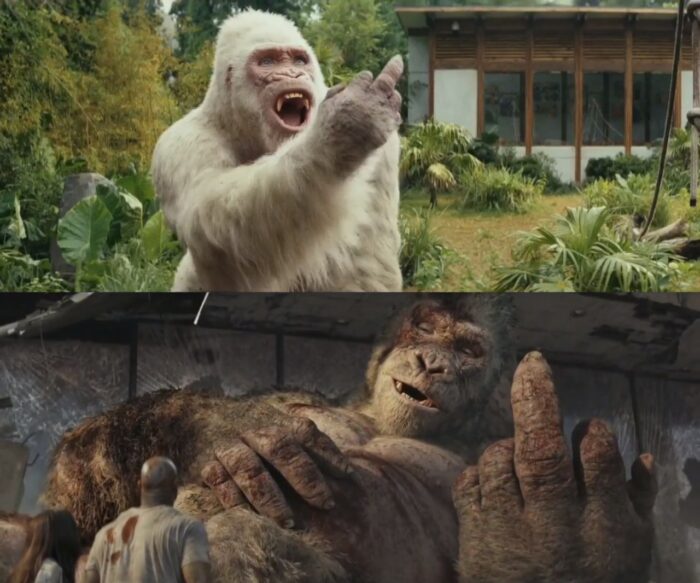 Now if we look at the original timeline and continuity of the Rampage canon we can see that this movie did go that route of the arcade games at all which is a shame. Yeah the story of humans mutating into giant robots by a chemical is cheesy but the movie was supposed to be cheesy, the video games weren’t trying to be a serious Godzilla / Kaiju adaptation but instead a cheesy and fun version of giant monster fights. This movie however decided to go the serious adaptation for whatever reason, and while not my choice, it also worked relatively well in a way so it’s not all bad. 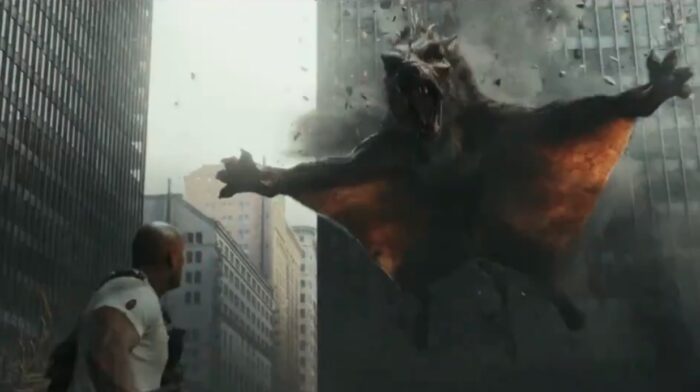 The movie stars The Rock as Davis Okoye an original character, I have mixed feelings on Dwayne Johnsons acting and he usually acts as the same character, but here he’s a bit too serious and not as charismatic as in other similar movies. Besides more serious, he also looks older than normal which makes sense, he’s getting older. Now the story is a bit more serious than the games stories but not as much as say the monsterverse Godzilla films but more of his humor was needed in this movie since there isn’t enough despite there being some. Also weird he acts so serious counting he changed the ending so it’d have a happier ending. We also have Naomie Harris as Dr. Kate Caldwell who is an overall boring character.

The actual story is dark and about poachers, you have George who is an albino gorila and his family was killed. In general it’s a good origin albeit generic, George has a cool enough personality, gives the middle finger and plays games, kills Grizzly bears which is sad and starts to grow which is the origin for the 3 beasts here instead of being humans. Lizzie is just a random crocodile that grows into a beast with a dilophosaurus like crest that looks awesome and Ralph a random wolf that grows flipping wings for some reason.

In general the movie needed more Kaiju action but despite that there’s a bit more action than other giant monster movies. Story of the genetic research going bad is a bit generic though and played too straight. But at the very least they succeeded in their vision despite not being the best one for the franchise, it was cool seeing how the internet gave the other kaiju names. We have plenty of buildings falling down as if it were Transformers movies but it makes sense if we count the Rampage arcade games. 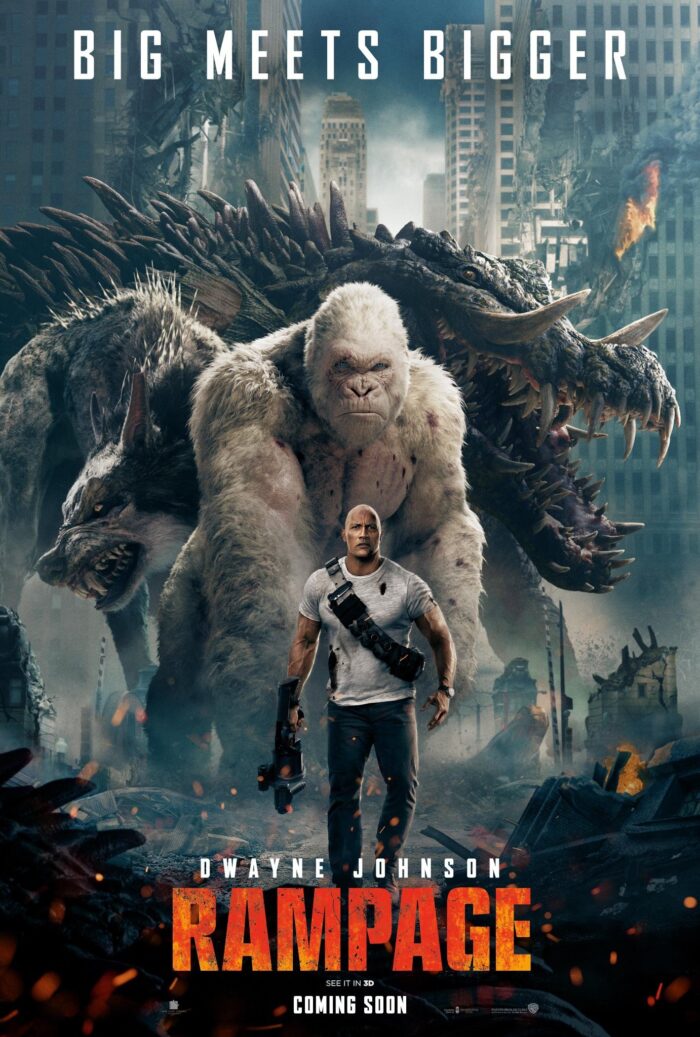 The actual movie is fairly violent all around, and even poor Ralph gets decapitated and he’s not the sole wolf casualty in the movie. The film is not colorful enough and a bit gritty and gray. The kaiju are different sizes and not anthropomorphic which is not my cup of tea Unsure how I’d feel about a sequel without Ralph and Lizzie though, maybe George should’ve died as well as in the original script before The Rock changed it, it would fit the tone of the movie despite since they didn’t go for the more cartoony option. 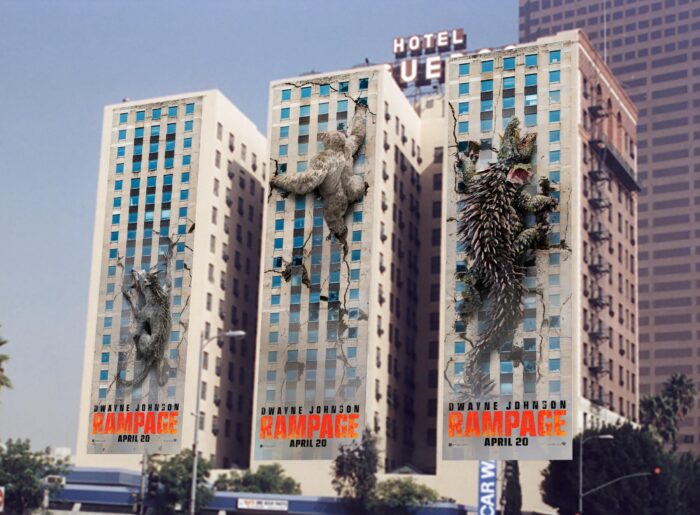 It does make sense that a human like The Rock was able to fight for a while unlike transformers so pops to that. Lizzie definitely looks like he’s out of Skull Island with his design and makes me wish for a Turok movie. The redesigns are alright as previously mentioned with their realistic take and the marketing was great seeing them destroy real life buildings. The Rock does get more playful towards the end of the movie after the whole city is destroyed, we needed more of that. 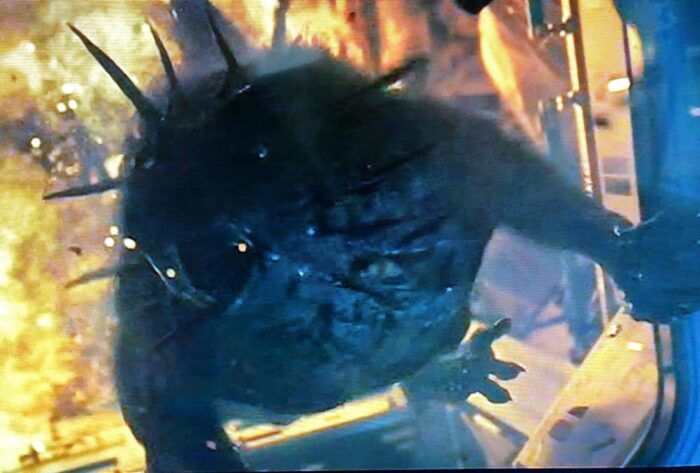 The OGA was sort of a Cadmus type organization, their project was called Project Rampage from Chrispr technology. The movie definitely earned it’s PG-13 rating, still unsure how they went with this decision of the grey movie, mentioned it plenty of times but it’s true. I also liked that Larry the giant rat made it into the movie in the opening. I totally want a sequel and see where they take it, the cheesier the better but even if nothing arises and while we didn’t get the vision of what Rampage had potential as a less grim movie it did a fine job. Glad this can exist.