Mazinger Z one of the first popular giant robot mech anime from the 70s that helped popularize the genre with a pilot doing the work inside. This thing looks old an dated but in reality it is easy to watch and quite comfy. It does feature a robot of the week format and a bit ridiculous at times but overall it’s a very solid anime. Here we take a look at the history of Mazinger Z anime and why it deserves to be one of the top mecha not only because of historical value but because it deserves it even to this very day. Shogun Warriors? Tranzor Z? Nah, let’s go for the original version. 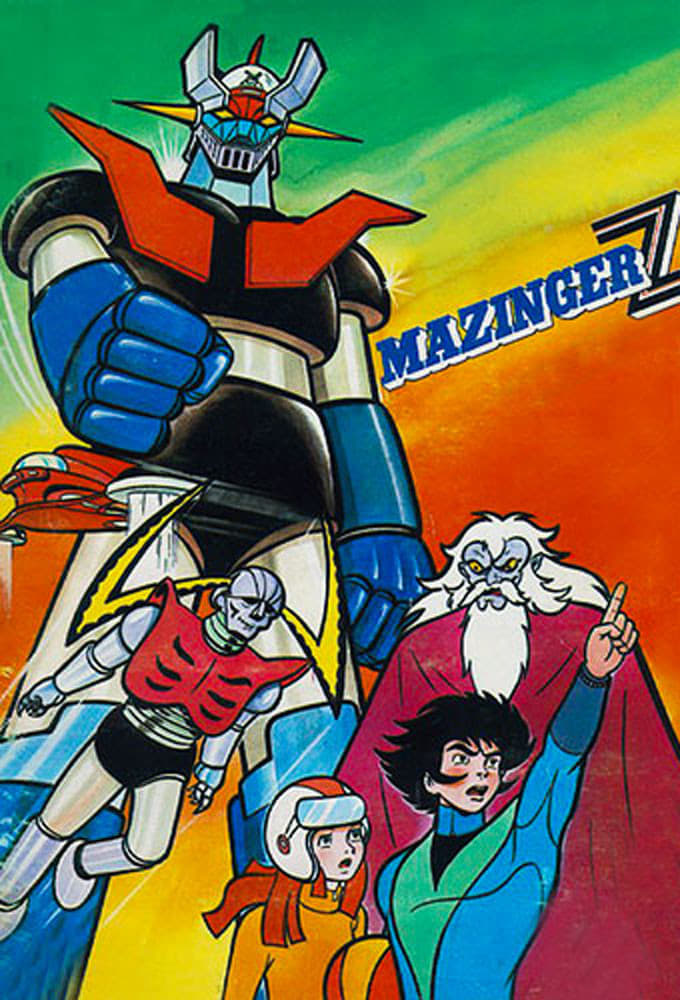 I remember catching Mazinger Z on tv a couple of times and thinking how old and ancient it looked but for since I had nothing else to watch I caught plenty of episodes. Eventually I watched the final episode and I was shocked that the story had concluded since that’s not something I was used to seeing at the time as a kid and it was rare to see a plot get resolved completely. Since then I had not watched it but had wonderful memories of Mazinger Z and finally got to watch it again and checked it out so here are my notes and little tribute to this giant mecha.

In general all the robot designs are blocky but this is something I like since it is it very robot like and the old school approach makes them feel realistic in a way oddly enough. Like the Godzilla Hanna-Barber Cartoon the size of the different mecha is not always consistent so we see them at different sizes depending on the context, sometimes even on the same episode or fight scene. Talking about the king of the mosnters, many of the robots make Godzilla sounds. And I mean the actual Kaiju straight from the movie. I wonder if there were no copyright issues to use that roar or if people just didn’t care or Toho allowed them. It’s even weird since they are robots and not even lizard looking or anything for them to make those sounds. 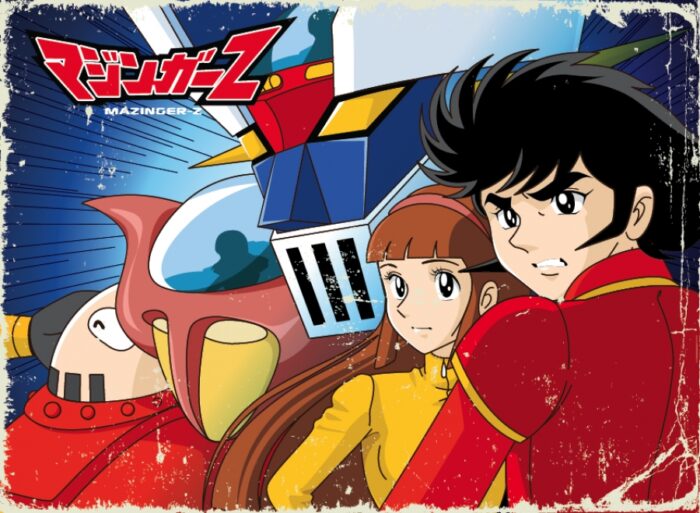 The destruction in some episodes is outstanding, they literally destroy cities as if nothing. I know its mentioned in other giant kaiju movies and it’s a trope even in Power Rangers but here i think a bit overdone. They show the massacre like the entire city was obliterated. I mean how many cities do they actually destroy? This is never really brought up much besides building drama for the episode, it’s quickly forgotten once the enemy is defeated. So many cities are destroyed, it makes no sense. I love it. 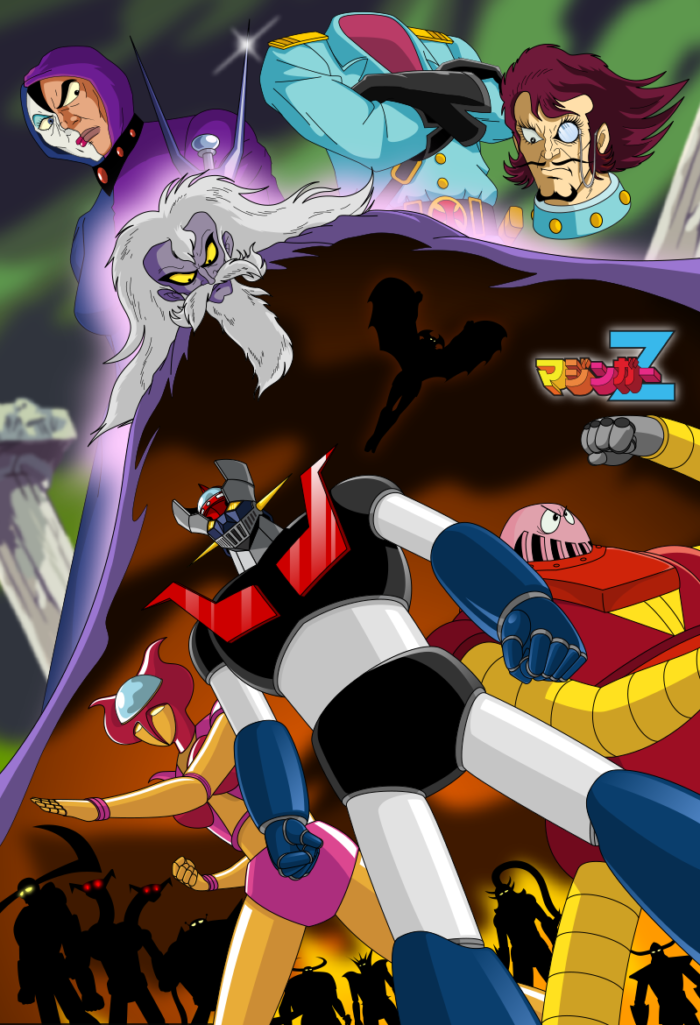 There’s something classic about the show when you watch it and it feels great. It’s cool to see this robot army and a traditional clunky one at that fight Mazinger Z, who is like Superman and defeat them after some struggle, it has its charm. Comfy to watch episode to episode, not too serious, not too cheesy, cool. Sometimes the fillers can be more of the same but you get to embrace it. Not all the robots are great or have the best stories and that’s ok. Clearly its for kids, some aspects are silly but like anime it has what might be considered inappropriate jokes which are fairly tame and in general its campy; it’s not meant to be taken too seriously. Somethings in the show don’t make much sense but that’s ok. 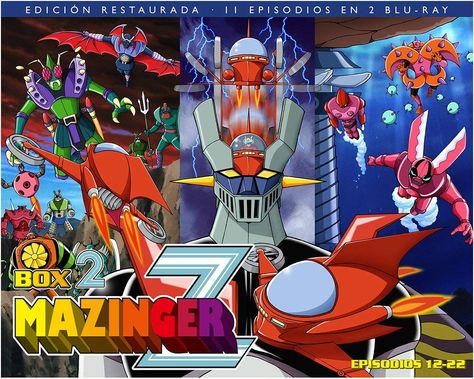 I like that to get to Mazinger Koji Kabuto needs to go to the top to control it through that copter machine he has called “pilder”. The Mecha movements make no sense many times. The mecha movements make no sense, I like that he gets on the machine through the pilder and also when it’s used without Mazinger. Koji is not the most likable hero, perhaps standards were different in the past but he is still unlikeable and shonen like and is apparently a martial arts expert as seen in some episodes. The cast and allies are also not the most interesting, like the characters and Sayaka’s father. Hell even the villains despite cool designs are a bit bland with all their personalities. The exception Sayaka, she has some personality is more likable, though the show is a bit sexist towards her, but also because of the time I’m guessing her personality didn’t get much more expanded. 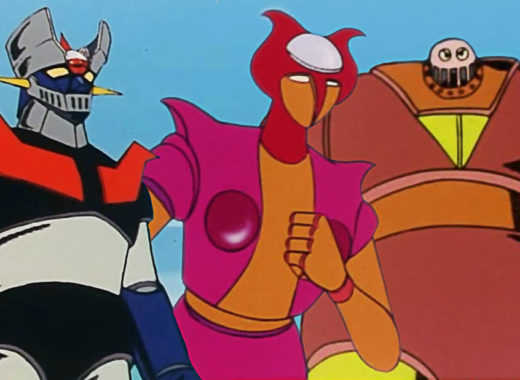 Sayaka has Aphrodite A, another mecha to help Mazinger, it has boob missles and is a weaker version but still gives Mazinger someone to tag team with. She has a love story with Koji but it’s very basic, mostly because of the era I’m guessing. Boss the fat guy who is always having quirky adventures like Bulk and Skull from Power Rangers at one point kidnaps scientist to get a mecha named boss orbot robot, it’s ironically awesome. Sometimes human characters talk to them in their giant robots as if they could just hear them all even though they are that far apart since they’re in their mecha. 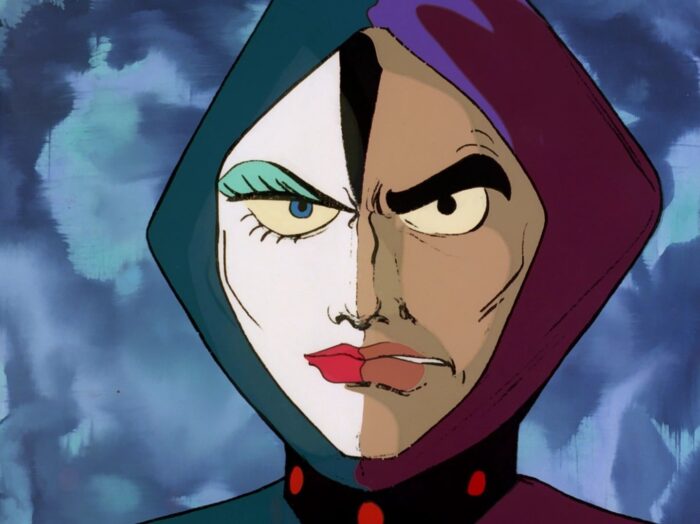 The villains are quite cool despite their backgrounds not being expanded on much. Dr. Hell is purple and what a name, how was he not going to be evil. Baron Ashura / Ashler is just awesome and original. Half man and half woman, depending on which side he talks from the sound of his voice changes and if he’s talking straight on then we hear both voices at the same time. He is made a bit of a cry baby but I guess they explain it away as his villain decay from losing so much to Mazinger. Conde Brocken the decapitated general is cool and creepy, like most of the bad guys. The grunts are divided in two factions iron masks / metal crosses that have goofy cartoon eyes painted on, which are just humans with roman like armor don’t know why there are two factions fog runts. But we only get glimpses of their backstories like Ashura might be immortal since he worked with many other people in the past. 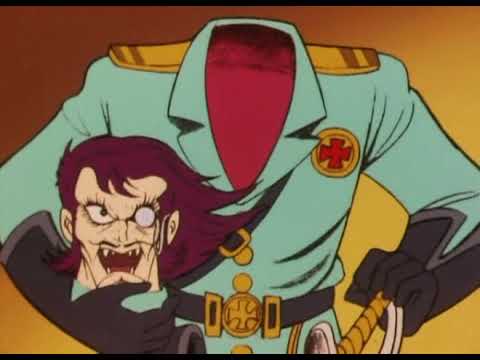 Later we get another general Archduke Gorgon who gets little introduction but I guess you can say he’s from the same atlantis backstory the original bad robots are? He has his own army. I mean he is half tiger half roman knight, what’s not to love with the villain designs, they go full crazy with imagination over what evil should be, including lava fortresses . As far as the evil mecha we don’t know much about them. The robots are sentient from what many episodes show and they sometimes go the route of tragic astro boy type stories. The sounds they make are great since it feels like they are indeed “heavy” same with the movements and I love that the have random weapons and different attacks straight out of a video game or toy gimmicks. It’s awesomely ridiculous how they get tons of missles coming out of nowhere from inside their bodies, suspension of disbelief is needed here. As mentioned many robots are shown to be sentient somehow even if not explained and some have memories of past lives, yikes. Makes their destructions more tragic since they aren’t just machines. 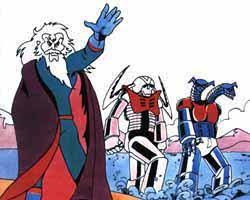 It is never clear where the robots are coming from, we don’t know. We know it’s ancient technology but besides that we get a mix of ideas during the show and it’s never expanded. The show goes full fantasy without ever explaining much, it started sort of grounded but no explanations to all the mythical things happening They only drop the information and expect you not to question it too much. Simpler times, it was just a cartoon and that’s fine I don’t think I cared much or wandered the rules of this universe, different times but I’m sure they explain those things in newer versions. Since there is a lot of world building opportunities missed for monster of the week route which is still cool. I like the names the robots get, makes them feel like a true army. It also is never clear if it’s new tech or if the robots were built from the old tech with new or what, a lot of mythology that is hinted at but never explained as previously stated. Did I mention there’s a Santa Claus robot? 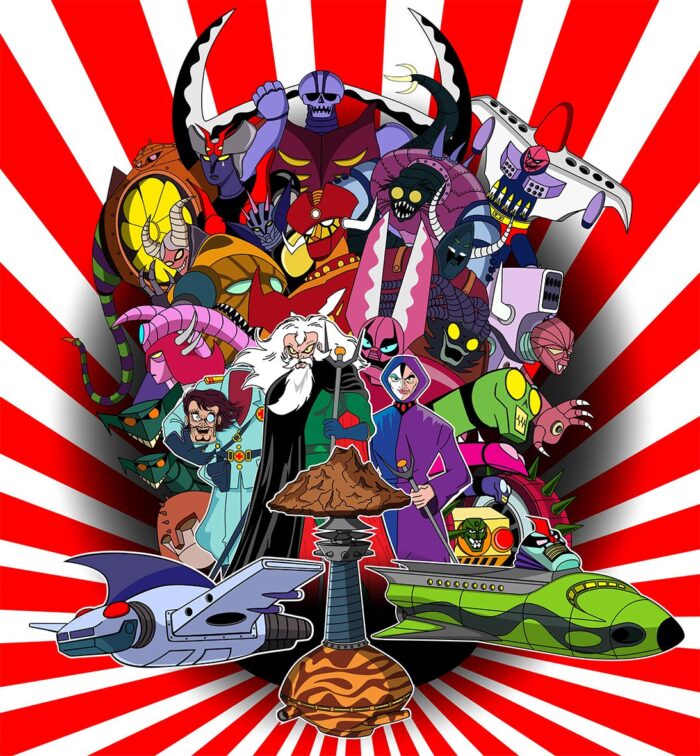 We get a second season of sorts after 30 some episodes, we get new villain general, new intro with lyrics, different theme and a new power up for Mazinger which are his wings called Jet S.crander He looks odd with them but perhaps at the time they were stylish. We also later get a Jet Pilder, a new Aphrodite that is blue. I love how boss robot he can be slapsticky but still help in fights and be goofy and it just works. It’s cool to see Mazinger Z have all these abilities as well and with Aphrodite’s new model she starts being a bit more Mazinger like. I love how original and interesting the enemies Mazinger fights, they’re imagination non-stop and I love them for that. We get a final Demon Officer Viscount Pygman who is just as amusingly designed and weird for Mazinger to fight. Dr. Hell for the most part is defeated in an anti-climatic battle but weu quickly get the twist of an even bigger menace of darkness and a deus ex machina ending that is also a twist. 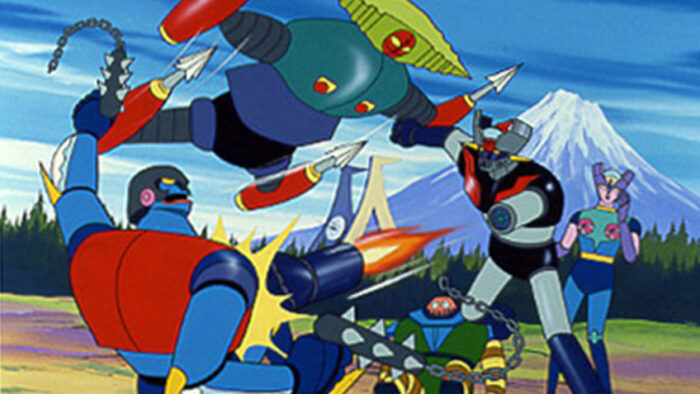 The fact that you can see the pilot of the mecha in the cockpits makes it feel like you have more context of what it feels like to be on a giant robot. Sometimes it feels like speed racer with the enemies attacking in such a ridiculous way, just a kids show from a different decade. The music is pretty good, a bit epic but hard to feel much of a threat at times. There is plenty of villain decay as the show goes on but also as the show goes on we see Mazinger Z being a beast. He not only beats the villains, sometimes especially near the end he’s just humiliating them in their defeats. Things do get a bit more dramatic in the last third which only makes for a better show. The end leads directly to a new series, gives a happy ending, it works well even if not the most epic fight, I do remember thinking it was far more epic as a kid so perhaps it was at the time.