In the dawn of a new Godzilla era and because I’ll also be reviewing the series based on this movie I thought it was needed for someone to chime in and defend this little movie from the Internet since it gets far more hate than it could possibly deserve despite its flaws. So whether you call him GINO, Zilla, American / Tristar / Sony Godzilla which I refuse to since he is Godzilla to me, and this is my tribute to him. 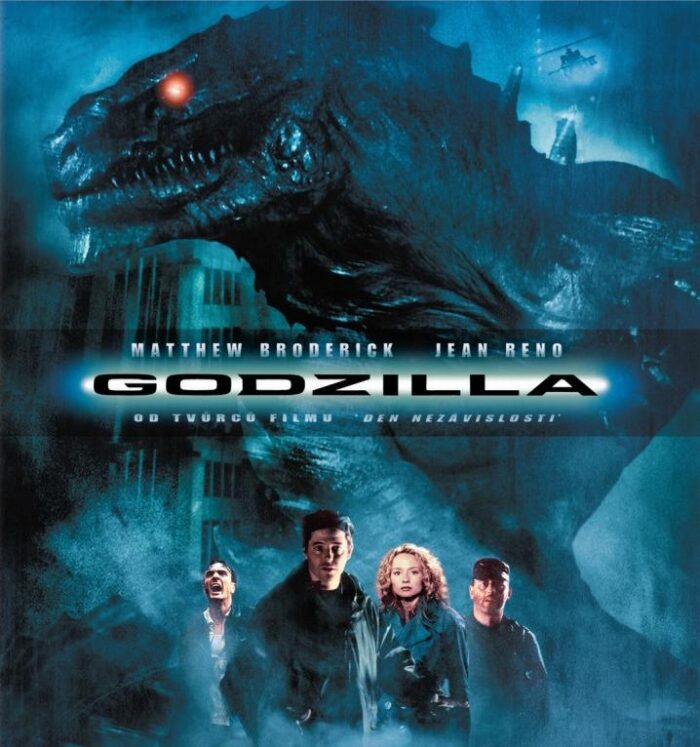 So you can better understand where I’m coming from I’ll let you know a bit of my backstory, I always loved Dinosaurs and liking Godzilla was a no brainer. I thought he was awesome even if I had never seen any of his movies and I actually sadly never got to experience any of his movies as a kid either. I never saw any Godzilla films on video rental stores or ever caught them airing on TV, the closest I got was the Hannah-Barbera Godzilla cartoon with Godzuki and even as a kid I was not a big fan of it and only liked it because it was Godzilla something. I go to a theater to see some movie and I get to see a T-Rex skeleton crushed by a giant foot and then find out a Godzilla movie is coming out and I would actually be able to see it! 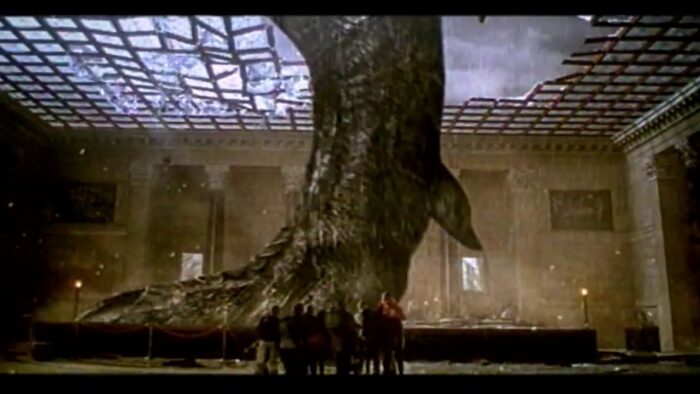 The marketing for Godzilla really was great since they kept teasing us with this giant creature you couldn’t see except for the collateral damage it caused, they really sold the movie well, even the music video was awesome. Finally I’d get to see a Godzilla movie! and while it did not blow my mind like I thought it would I still thought it was good. Watching it now definitely lacks the excitement I had when first seeing it but I think it is a worthy reboot of our favorite Japanese giant monster, Kaiju or whatever you want to call him. Now is it the perfect film? of course not but you can’t really say that it’s horrible and it’s much better than Legendary’s Godzilla 2014, it wasn’t until Shin Gojira that he was made scary again.

The main flaws the movie has is it is a bit too long and it can get a bit boring in some scenes because of it, I can not take the French army troops seriously and the dialog could have been much better. Besides that I think its a more than decent attempt at bringing a westernized version of Godzilla, unlike all other Godzilla movies besides a few; It actually tries to make the concept of Godzilla in a somewhat realistic setting and I like that. The unused script for an American Godzilla film before this one just seems awful even if its more like the Japanese Godzilla and as I mentioned 2014 wasn’t a better film.

Lets tackle the actual monster now, Godzilla’s design is a common complain, but hey this is supposed to be a somewhat realistic reboot for the time and the original Godzilla looks like the now scientifically inaccurate tripod pose that T-Rex used to have and break its back while Sony’s Godzilla had the now accepted thanks to Jurassic Park and scientifically accurate T-Rex pose. Personally I think he looks awesome, and easily looks much better than Showa Era Godzilla or Legendary’s Godzilla.

Now lets take a look at common fan complaints of why THIS IS THE WORST MOVIE EVER. “He doesn’t shoot his atomic breath”, “He doesn’t fight a monster”, “He’s an Iguana”, “He is able to get injured by bullets” THIS MOVIE SUCKS BECAUSE OF IT. Really? Those are the common complains that are usually thrown at the Tristar Zilla and man are all of those overreactions. This is not the first time a Godzilla film is made where he doesn’t fight a monster, this was a new version of Godzilla that introduced the famous Kaiju, there was no need for a second monster that would have only complicated things more. Godzilla Resurgence also didn’t fight a monster and neither did 1954 nor 1984 and they’re easily some of the best the series has to offer. I was saddened when I found out 2014 would fight a Kaiju in his first film. 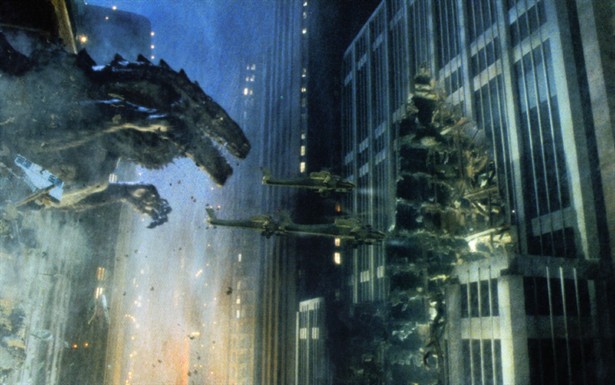 This movie was trying to make a more realistic take since the west tend to have different expectations from movies, so yeah no atomic breath, but they did make up for it by showing Godzilla blow Fire twice during the movie in an way that it looked like he could breath fire and pay tribute to Toho’s Godzilla Atomic breath. This is also why he is able to be killed by the army, I mean it just makes sense they’d be able to when they’re throwing all the weapons the USA Army has at him and even then it still took quite a beating before she finally died. It’s not like the Oxygen Destroyer was such a great way for Godzilla to go either, actually scratch that it’s fairly cool even if a bit un…..

And who cares if he was an iguana, which is never even explicitly stated, Toho’s Godzillas background is a convoluted mess and I’d argue he’s backstory is just as bad and that only Reptar from Rugrats got a decent backstory. Oh of course we can’t forget “ZILLA GETS BEAT IN JUST A FEW SECONDS IN FINAL WARS LOL” well, its not like it was a real fight anyways, no different than someone beating someone else in pro-wrestling the outcome is scripted, obviously since it was a Toho film and people hated the American movie it was just a fun gag, besides in that film Godzilla pretty much slaughters every other monsters just as quickly. It wasn’t meant to be more than a nod to the fandom.

I just fail to understand why so many people hate the movie with such a passion, just because its different? Lets face it, its not like most of Toho’s Godzilla movies are quality, they are mostly silly B-movies at best in a “so bad they’re good way” and prime examples of phoning it in, especially when referring to the Showa era movies but even the later ones are guilty of this, I won’t deny they don’t have their charm but to outright bash and say “GINO” doesn’t belong and its below a certain quality than the average Godzilla movie is just silly. I definitely think that people just like to join the band wagon of bashing it. 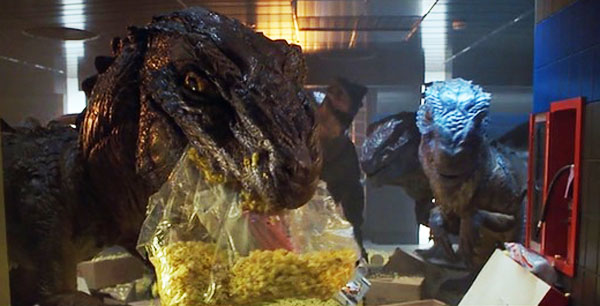 Overall it is not a great movie but far from being one of the worst Godzilla movies and It’s not a terrible take on the character. The movie actually made decent amount of money so people saw it, too bad it didn’t get a sequel or the planned trilogy since I would have loved to have seen them and see what else was in store with the other movies. At least it got some type of sequel with a cartoon based on Tristar’s Godzilla.