Street Sharks got a spin-off with anthropomorphic dinosaurs called Street Sharks; The idea alone already seems like a winner. They were never able to reach the popularity of Street Sharks. However they did get a cartoon and since it was synidcation season order they actually got more episodes than the Street Sharks did with 52 vs 40 episodes. Hell the last season of Street Sharks was a crossover season featuring the Dino Vengers, so you can add 8 more episodes for a total of 60.

As mentioned the third season of Street Sharks had them share the starring role with the Dino Vengers which were setting up the spin-off. Eventually we got the spin-off cartoon Extreme Dinosaurs instead of DinoVengers a slight name change but in general it seemed to ignore everything that came before it with a new origin. Now if you want to you can actually still count the Extreme Dinosaurs being the same as Dino Vengers, just imagine they changed their names and reconcile some inconsistencies between both origins bit it’s not impossible. 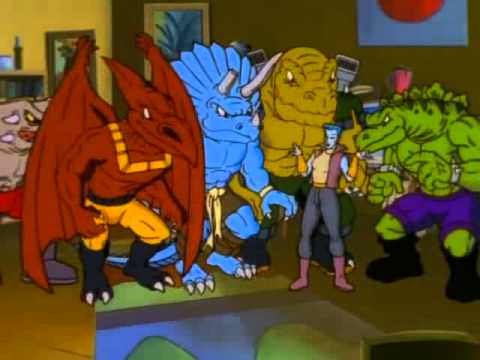 The main problem is the DinoVengers are from space while the Extreme Dinosaurs are from Earth, get taken to space and return to modern Earth. They do mention different dimensions so it can work that they are different Earths. Villain decay here is extreme since it already sets in by the second episode. The dinosaurs actually have more personality traits than their appearance in Street Sharks but not by much and even then somehow they end up being less interesting. The voice actors are way more passive and not great, with the Raptor enemies sounding and being silly instead of threatening. The third episode has them wearing pajamas..

Street Sharks had its flaws but here they really aren’t even trying. Every episode feels so generic and formulaic, the raptors are bad and the dinosaurs are good and that’s pretty much it. The quadranians and sci-fi elements are all interesting but they never get much focus so it doesn’t make sense or matter. They have a bunch of dinosaur puns like “let’s fossilize them” The Raptors are never a threat sadly.

Street Sharks is the better show, this one is not crazy inconsistent like Street Sharks but it’s just boringly consistant; It’s a worse show because of it. We still don’t get any explanations on anything either like on Street Sharks. It feels like those early 90s cartoons that were made by executives and just hired some writers to create some safe generic self contained plots for each episode.

I guess the hexadrones or whatever gave the dinos intelligence? I do think the theme song grew on me and some of the puns are growing better. The poor guy who is an anthropologist who just ants to proof that talking dinosaurs exist is a weird antagonist, he isn’t really bad and yet he is portrayed as such. It’s established grey aliens do exist here, it can be a pretty goofy show as I stated.. It doesn’t take itself seriously at all, much lightter than street sharks, not like that was violent but whatevs. This one aims at a younger audience. Personalities are a bit bland, don’t even fit their character designs of the extreme dinosaurs. 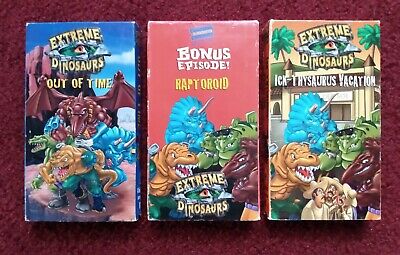 The raptors want to induce global warming , so an ecoological show like Captain Planet. The origin of the new ally ankylosaurus makes no sense, it has a planet with anthropomorphic dinosaurs and he just randomly joins, he goes back to the present with the dinos they have a new ally. There’s this Brittish boy with a red cap that appears in various episodes, he’s the prince of England. the dinos go to space in one episode to the moon, this aspect of space travel could’ve been used more given their origin. They start using some vintage cars that fly with rockets that are cool but never explained how it happened.

I liked the episode with the haunted spirit fossil dinosaur bones attacking and later they merge into a super beast with pieces of all the dinosaurs, it’s like skeleflex in cartoon form, hell a skeleflex cartoon would’ve been awesome, I can’t believe it basically happened here. The robots reform like skeleton warriors too and we also get some robotic dinosaurs, it made no sense but it was fun and most memorable episode by far, i think that had potential for being recurring allies or villains. 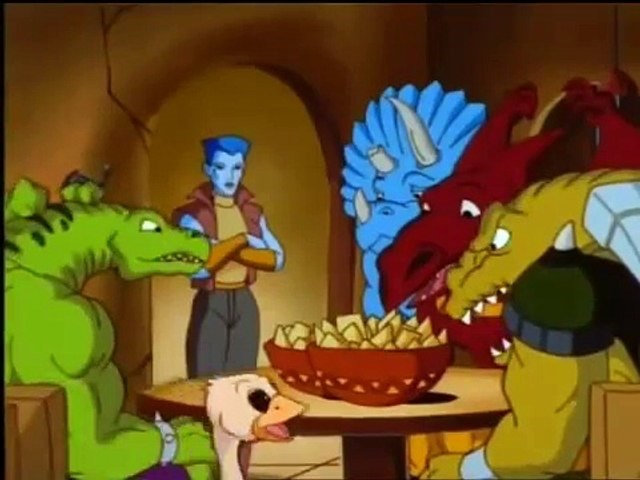 The villains are just not threatening they’re lame,. The dinos are extreme yet not interesting either. I think I wouldn’t have liked the show too much as a kid and I would’ve eaten up anthropomorphic animals of any kind easily like street sharks. And these were dinosaurs likely my dream show together, its just bland like Dinosaucers. We get more episodes with them dealing with aliens. I do like that the bad guys eventually get robot dinosaur henchmen, at least it gives some fodder to fight against. This show is sillier than the 80s tv shows and TMNT at parts.

The show at least has built a better rogues gallery kind of.. Off model drawings constantly happen, the 52 eps format didn’t help the show, much kiddier than street sharks. At least sharks were trying badly to be cool.. they fight in the daylight why aren’t people aware that dinosaurs exist again? They don’t even try to hide. It seems to have decided to take a page from street sharks and have music montages were they fight with no dialog, just music lame. None have really any personalities, a bit more than street sharks but not much. the robot dinosaur henchmen aren’t used much only a few episodes. Athropomorphic dinosaur shows are just never good.

It’s as if street sharks was done by people who cared and were just awful at writing while this was made by people who didn’t care and just wrote generic as hell plots. They act very different than the street shark Dino Vengers but it can totally be canon and at least if we take the crossover it offers a finale to this show as well as street sharks. There are many recurring villains but at the end of the day they team up with raptors. A lot of aliens here too. Global warming is a recurring theme, villains want to warm it up. After appearing in pretty much every episode the raptors are just boring villains, it’s more interesting when you see someone different even if it doesn’t have strong rogues gallery, at least it was something different, sadly it usually involved the raptors.

I did like the use of aliens and also that one episode with anthropomorphic creatures. One is like a lobster creature that feels out of street sharks, another dinosaur that is cool and feels like one of them, Only 2 parter in extreme dinosaurs the two parter second part isn’t as good and a let down but still better than most episodes, cool to see the dinos in motorcycles because of how ridiculous it is. Overall like 10 episodes have been “good”. 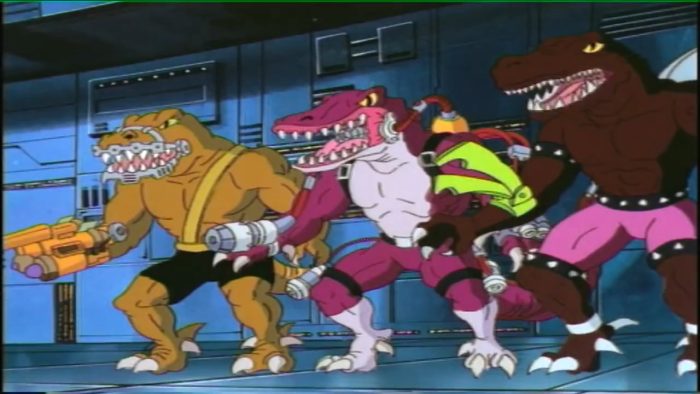 The toyline didn’t have a lot of toys, i guess that’s why they didn’t introduce too many new characters but it was a wasted opportunity. Like street sharks they started having some songs, could’ve used a street shark crossover. The cartoon felt more of a parody, not taken seriously, much younger audience. Definitely potential for it to be more. The last episode is a cute christmas episode but nothing else, I actually think that you should watch the streetsharks season 3 alongside extreme dinosaurs, and watch the final episode of street sharks as an ending for both street sharks and extreme dinosoaurs. Sure some of the personalities are a little different; They’re goofier in the extreme dinosaurs, in fact they’re portrayed far cooler and better in the street sharks. Their catchphrases are a bit different and so are the names they’re the dinovengers but you can ignore that for the most part. The originas can work in a bit of a convoluted mess as I stated, they’re still aliens and they’re still from earth, both things are correct, hell in a way they’re not even from the same earth so it can definitely work.