Just found out about this 1991 Dinosaur movie Adventures in Dinosaur City and it looked odd enough for me to check it out, after all, it couldn’t be worse than the PreHysteria! Trilogy right? Popular enough that it sort of got a video game based off of it with DinoCity even though they took plenty of liberties with that SNES game. The suit actors reminded me enough of Dinosaurs so despite looking bad I needed to check it out and the game looked fun enough to play so here is our tribute to the Dinosaur City franchise in the form of the movie and game. 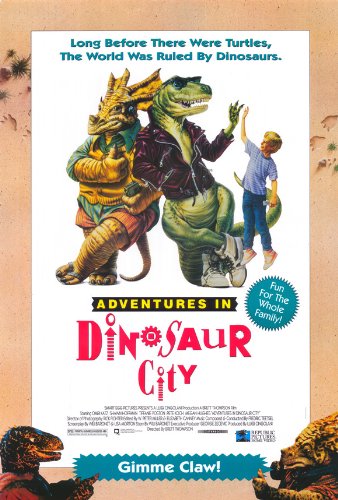 This movie is sort of a Honey! I shrunk the kids rip-off since you have a couple who are scientists and work on some crazy science and invent something that can suck you in a la Tron. You have three kids: Timmy, Jamie and Jack who like dinosaurs and watch a show of anthropomorphic dinosaurs, one of them suggests watching the show on his fathers big screen and accidentally suck themselves inside the world of the dinosaurs. I guess this is a “go inside the computer” type of movie as well? hmm.. 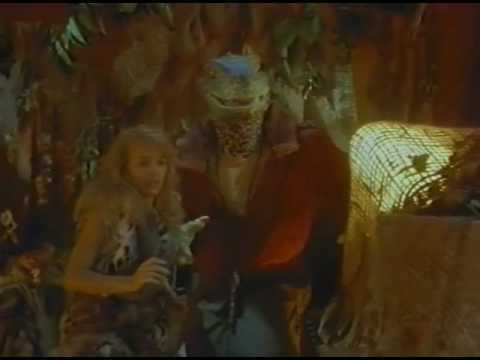 The world actually looks somewhat similar to what you’d expect from the Dinosaurs TV show by Disney, funnily enough the movie is called Dinosaurs the Movie in Europe. The movie came out at the same time as Jim Henson’s Dinosaurs but the puppets of the dinosaurs here are a huge downgrade when compared to the others, despite that this was a movie and the other just a tv show.
Wouldn’t really work since cavemen are Flintstones level smart here though without taking into account that it’s supposed to be a cartoon. 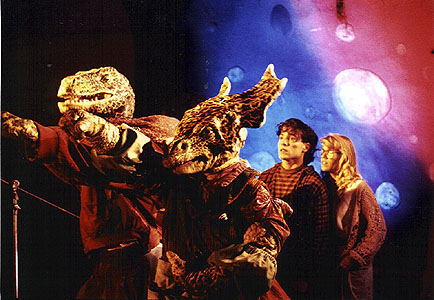 The kids are helped by a Dimorphodon named Forry who guides them through Dinosaur City and then save the dinosaur world by stopping Rex / Mr. Big. The action, plot and drama is all aimed at very young kids and it’s rather boring. It’s almost like a cheap Dark Crystal at times and a huge explosion in the final fight. I wouldn’t really recommend this unless you want a Tron/Honey I Shrunk the Kids/Dinosaurs/Dark Crystal combo where things don’t turn out as cool as that sounds. 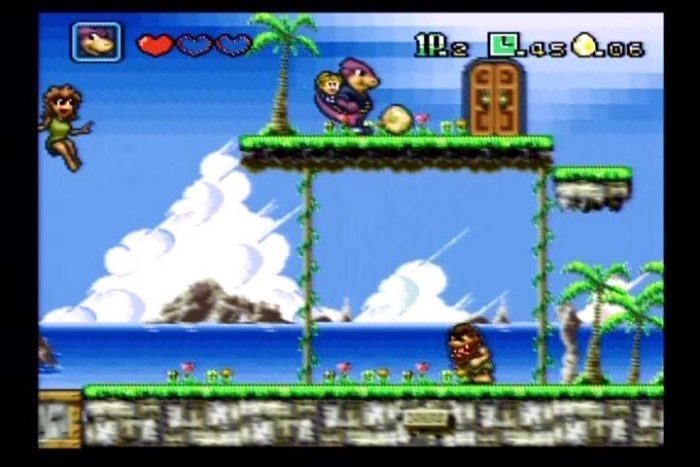 Dinocity was a game made with a slightly different name and very different look so you wouldn’t exactly put the two together as tie ins except for the fact that the story is the same. It being a Super Nintendo game means there isn’t a lot of story but that might be for the better after the original movie being somewhat of a bore. The game is a simple platformer that doesn’t excel in any regards but is average enough for players not to mind it too much if they decide to play it.

You can choose one of two different dinosaurs who have one of two different kids on their back similar to Yoshi’s story without the crying. The artwork is cartoony and looks nothing like the movie, especially the american box art since at least the Japanese art does resemble the game a lot more. Sort of reminds me of a generic Joe and Mac since you do have cavemen in the game that attack you. I wouldn’t say it complements the movie very well but hey what the hell we got a movie and a game of dinosaurs in this franchise so I won’t complain for doing so much with so little. Don’t forget that for more tyranno sized articles on dinosaurs click here.