Whether it was because they couldn’t secure the licensing deal to use Cookie Monster or because they were too cheap to acquire them, the Mexican brand of chocolate chip cookies Chokis decided to make their own cookie monster. Now this isn’t just any off-brand, they’re made by Mexico’s biggest cookie manufacturer Gamesa which was eventually acquired by PepsiCo. In any case this was the best thing ever since it gave us some awesome commercials we can talk about. We His name is casually mentioned as Cobo or Kobo and since he seems forgotten by time I’ll go ahead and adopt him as the unofficial MiscRave mascot, so let’s meet him:

His appearance is similar to cookie monster but he has a less defined neck and his hair/fur is green and his eyes are perfectly normal unlike the other cookie monster addict though his mannerisms are very similar. Because of his fang and the way he moves he reminds me of Bogge from Eureka’s Castle and he does have some blue/purple streaks at the top of his head which makes him fit perfect for a Rave.

His first appearance was in 1996 where he seems to be a little selfish and greedy but he’s no fool as he ate more cookies than the dude in the purple polo and is planning on now to deal out his portion to make it fair since he now has none, I mean what a jerk! The slogan used was that it’d be monstrous to stop eating them and that’s how we got to know him.

In 1997 we got another commercial with the same guy in the purple polo shirt but this time he gets to outsmart him by tricking him that if he waits he’ll get 2 Chocolate chip cookies but learning to be a jerk thanks to Kobo he just breaks it off in two pieces, poor Cobo is left crying. I’m unsure if there’s any other commercials because I haven’t found any but I hope I do so I can post them here. 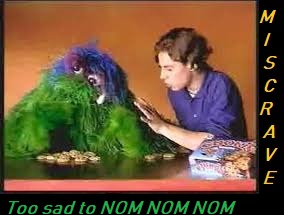