When Jurassic World Camp Cretaceous was annouced I was excited but didn’t know what to expect counting the track record of netlix shows. The first teaser trailer looked very promising showing a realistic dinosaur. But then they revealed the character designs and I hated them, they looked generic cartoony cg which killed the hype of the show since the designs didn’t blend well with the art style of the dinosaurs. I love Camp Cretaceous it’s a decent Jurassic Park cartoon but it’s as canon as legend of isla nublar. I’ll leave it at that here but here is a season by season overview as to why it isn’t the same as the movies. 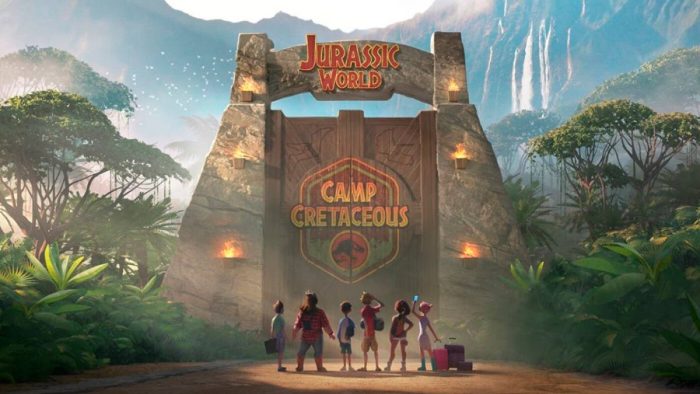 At 8 episodes the intro evokes Jurassic Park more than world, and is high quality! There’s a VR game about Jurassic World where dinosaurs eat each other? IT sure doesn’t seem like they’d greenlight a game based on dinosaurs eating guests counting the in universe tragedy of the trilogy events but it’s cool that they’re playing Jurassic World VR games. We get another divorced family in Jurassic Park media here? Using the dinosaur raptor tracbone to emulate the sound like in JP /// nice ester egg but how did that even make it there in universe? A lot of stuff from the show in general evokes Jurassic Park more than Jurassic World. In a way it feels like a goosebumps book, not quite scary but scary situations created that lead to nothing. I’m glad that they can use the films soundtrack though it’s a bit overused and I wish it had more of it’s own identity musically, I wish it had a theme song.

The skyhook seems a bit dangerous with the random brachiosaurus passing. The first episode shows exactly why camp cretaceous with a bunch of kids would be an awful idea if they wanted to keep the park incident free, not very realistic from the start and the first few episodes do play more like a mini movie, heavily serialized. It relies too much on Jurassic park references. Dr. Wu is portrayed as especially evil here, similar to / in legend of isla nublar. I do like bumpy even if she was made to be cute. The kids escaping the Carnotaur is ridiculous and much more could’ve been done with him in general in the Season. A lot of the homages feel more like just copying the original movie instead of being a homage. Don’t get me wrong I like the season but it’s ridiculous and for kids.

the characters are actually pretty great, they feel like real kids for the most part, sometimes they act a bit wooden but overall they’re done well. Some of the later episodes are nice episodic in a way, it’s nice. The show gets some really cool moments and I love it like I do Bumpy but I do think the season is overrated. Indominous Rex should not have been portrayed so dumb against the kids, it makes no sense. Mantah corp is interesting but I also wish that they would’ve just used Biosyn. Overall all the situations they get into are just ridiculous since they escape them all without consequences. At 8 episodes, most of the same complains and praises from last season are here as well so I’ll focus more on stuff specific to the season. It’s weird seeing dinosaurs run like nothing happened just a day after the events of Jurassic World but I guess if some like Rexy were from the original park it could make sense they were already used to being free. It is still ridiculous that they are already all over the park and the kids running away from them. The aftermath of Jurassic World is cool, feels like a continuation of season 1, more of a part 2 of the same season. 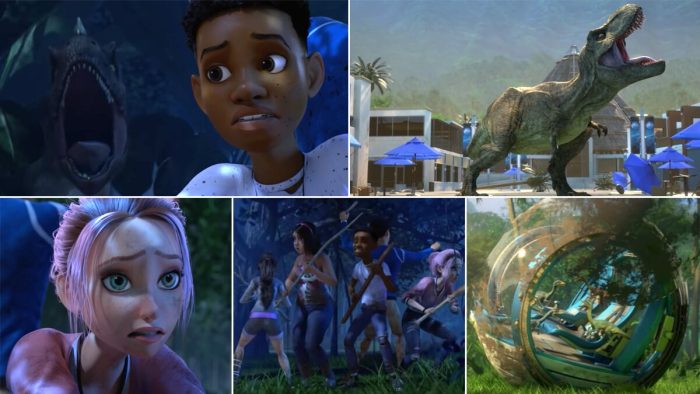 In many ways Season 2 is less realistic, how long were they there for? You’d think more military would go out to find any missing people, especially these high profile kids, heck just searching for stuff left in the park. I mean how long were they there for? The show doesn’t seem consistent with the time passage and it doesn’t make sense at all since it tries to portray something that has been abandoned for far longer. Second season had potential with the aftermath of the park but it’s a bit boring, the big game hunters were a cool idea but not implemented great and there are a lot of plot holes in the show.

This time we get 10 episodes, they try to escape with many ideas on how they tried, I actually would’ve liked to have seen those attempts as it would’ve made some fun episodes. Teenagers alone for weeks wouldn’t they be having many Blue Lagoon moments? Their hair would grow out though I guess we do see that a bit later but still wouldn’t they have called their parents or the parents had called the police to find the bodies? too many unanswered questions that don’t make sense. I love bumpy but it acting like a dog instead of an animal makes no sense since she’s a dinosaur. I like that they try to remind us that even the carnivores are just animals, not necessarily evil. I liked visiting the old park but as usual in Jurassic Park media it was wasted a bit. Seeing Blue was cool and more real connections would’ve been nice. I like the dye of the hair does get roots and that Kenji gets a small beard. 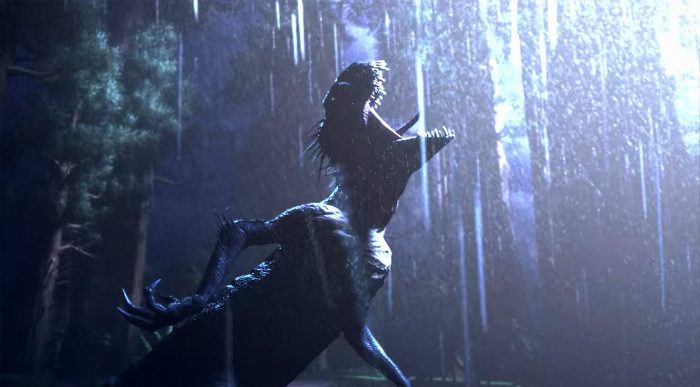 The E750 project, Scorpios Rex, first hybrid dinosaur? I like the idea of the Scorpious rex and hybrids in general, seems a bit too similar to Indoraptor even if it’s meant to be a prototype of it, still feels redundnat so I wish it had been a bit different with a more unique color but design is great. The first hybrid. the scorpious being a beta version of the indoraptor is cool, makes sense. The last two episodes are really something different, they feel cool, with it being a bit convoluted that they take place at the same time as the intro of Fallen Kingdom, they frame Wu as too much of a bad guy, still cool to see mercenaries in the actual island.

At 11 episodes season 4 starts a bit slow and drags quite a bit, I wanted to love this season but it’s hard to. I liked seeing the sabretooth tiger and wish we had gotten more non-dinosaur prehistoric animals. I wish we gotten to Isla Sorna for a few more adventures but oh well. I love the idea that it can reference even if by coincidence something as goofy as Scan Command since I’m a believer of CUPO. The BRADs are absolutely ridiculous as are the ideas of the domes, so in general the Manta corp island. We get dinosaur battles like the ones from the ludia games of Jurassic World which is kind of neat. I don’t have a problem with robots, it’s just a bit on the boring side, needed a bit more fanservice, exciting. It’s a cartoon so I can set my suspension of disbelief accordingly, but it needs to be entertaining. Having the kids in a boring episode escaping death for the 30th time just isn’t fun. The show is already ridiculous so it should embrace it, but in a fun way, this was not fun nor realistic. 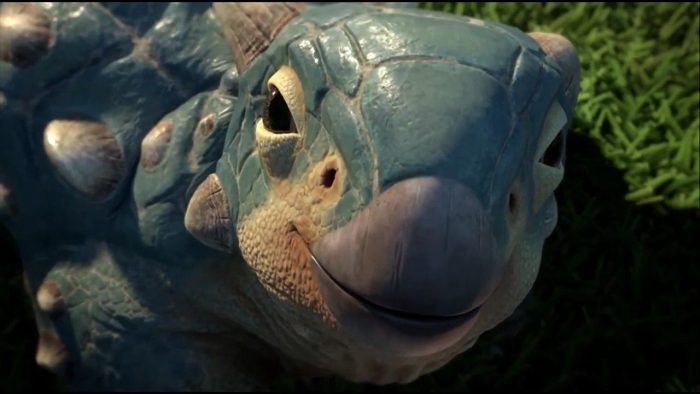 Season 5
At 12 episodes it is the longest season and well it continues where the last season left off so it’s still a bit on the goofy side. Though it feels a bit better. Overall I think they could’ve taken better decisions these pas two seasons but the show was always unrealistic. I feel if they had wanted to stick closer to promote the movies or explore that ideas from the movies. Unsure what they were thinking of going but the Biosyn plot while not too bad could’ve been better if it had been Biosyn all along instead of Mantacorp. I don’t know why this wasn’t established in prior seasons. The season slows down sadly. The spinosaurus rematch was alright but not necessarily. The ending works but it definitely feels like the last two seasons are a different show, far more cartoony, it should’ve been either one show that was closer to the premise of season 1 following the movies or totally fun crazy like the fifth and fourth seasons. It’s the mix of both styles that clashed.

Jurassic World: Hidden Adventure
The choose your own adventure interactive game experience takes place sometime after season 2 and before 3 and unlike other interactive movies that Netflix has made with Carmen Sandiego or Stretch Armstrong this one is actually pretty good. There are far more choices here to be made and more paths you can follow. It isn’t like you can get too lost, in reality there are only three endings, a bad one, a good one and an ok one. There are only two choices that lead to different stories the one of the security vs main gates and the roller coaster vs car ride. Any other choices will mostly involve a very slight dialog change or slightly different scene but nothing major. Of course there are some incorrect choices that will get you killed and one choice for hearing dino facts gets bumpy a mango in both endings, if not that is skipped. In reality with just some dialog tweaks you could have all 4 different choices in one big “movie” but even splicing them without dialog change would only create some slight continuity mistakes, nothing too major. Which is nice since every scene in the movie is fun. It feels more along the first two seasons which is a good thing. The idea of a park named Hidden Adventure was also cool.

52 Episode run the last 3 being the movie. The show has so many callbacks to Jurassic Park it feels more of a cheap copy instead of its own thing, a few nods here and there are ok but this was too much. None of the kids ever being in any real danger and surviving all those dinosaur attacks is just ridiculous. I like the characters and and the adventures they go through but it really needs to just be classified as other cool spin-offs. Sure it’ll be cool to see them have a nod in the movies but clearly the events as they happened here could not have happened in say the movie universe. Jurassic World Camp Cretaceous is a good Jurassic Park cartoon but not only is Legend of Isla Nublar better, I also think we can do better in animated projects.